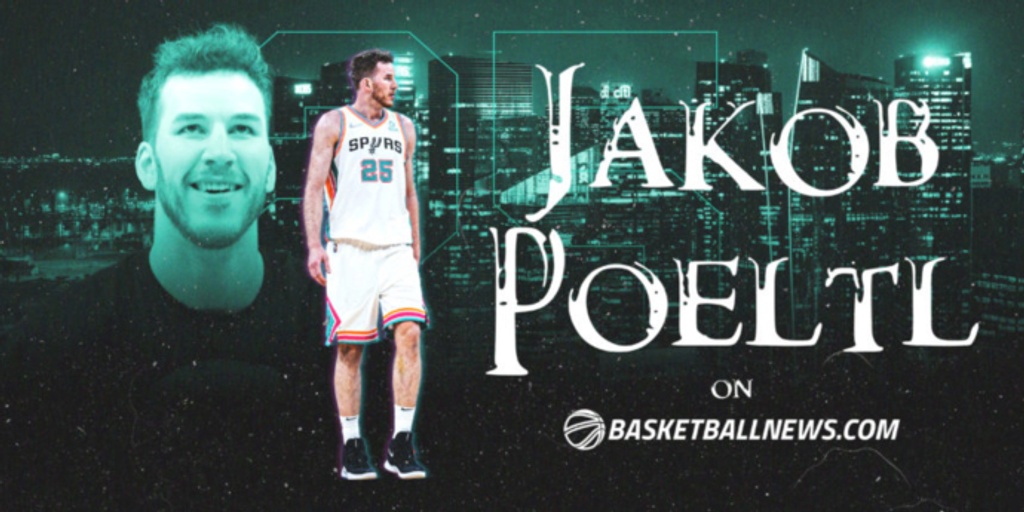 In a game defined by its giants, being a big man has always carried a certain level of expectation.

And arguably no NBA franchise has this expectation looming more than the San Antonio Spurs.

From the early days of Artis Gilmore, to the "The Admiral" David Robinson's stint commanding the watchtower, to Tim Duncan’s subtle dominance, to LaMarcus Aldridge’s surprisingly effective repellent nature, the Spurs have always fielded an elite defensive big man.

And that makes Jakob Poeltl the perfect successor to this chain of iconic anchors.

This season, the human fly swatter is contesting shots at a higher rate than anyone in the league, while also holding opponents to over eight percentage points below their usual average.

Along with his eye-popping numbers, the sophisticated beauty of his game has been easy to admire year after year (even having said he was playing on one of the most valuable contracts in basketball).

So, it was time to get inside the mind of one of the league’s best defenders.

During training camp, Poeltl made it known that San Antonio's massive roster turnaround meant he needed to be more vocal, particularly on the defensive end of the floor. And considering renowned analysts are praising his communication skills, it’s safe to say his mission has been accomplished.

“First of all, [communication] is one of the biggest parts of being a big man in the NBA.” Poeltl told BasketballNews.com in a phone interview. “If you are not good at communicating, your guards are going to keep running into trouble over and over again.”

Here is a perfect example of his articulation skills at work.

Turning up the volume is recommended here; if you listen closely, you can hear Poeltl instructing nearby help defenders to “stay” back on their man because he’s going to offer the necessary backline support himself. This forces Steven Adams to make the weak-side corner pass (an easier pass for the defense to close-out on), and ultimately, Poeltl's reassurance results in a missed shot.

Then, Poeltl dove a little deeper into specific coverages. Being the mad scientist he is, Spurs head coach Gregg Popovich loves throwing a good ol’ zone at opposing offenses.

Listen to this next clip to hear Poeltl break down what’s going through his mind in these situations.

“[It] comes down to a lot of communication as well," Poeltl said. "The offense is going to try and exploit weak spots. I’m just constantly on the lookout for what they are possibly trying to set up. And telling those guys around me to move over, overload one side, whatever it might be.”

“There’s a lot of pick-and-rolls in this league because it’s so efficient and you're creating a lot of 2-on-1 situations," he said.

As the big man who has handled the fourth-most ball-screens in the NBA, Poeltl knows his way around these spots.

“I’m really just trying to keep the offensive players guessing," he said. "And at the end of the day, play the percentages.”

The next clip provides a prime example of what he’s talking about:

Poeltl intentionally sags off of Mike Conley because, while he’s a good short mid-range shooter (45%), he’s a slightly better finisher (53%). But even more important, by accounting for the roller, Jakob avoids Rudy Gobert’s lob-finishing wrath (77%).

"Playing the percentages" became a recurring theme throughout this conversation, and Poeltl's appreciation of the mathematics of the game bears resemblance to another defensive tactician — Bill Russell.

Like Russell, Poeltl makes himself familiar with his opponent’s moves and tendencies in order to lure them into their least efficient spots on the court.

And his astuteness appears to be paying dividends, as Poeltl has held some of the best low-post bigs in the league to numbers below their usual outputs.

Poeltl's work against current MVP candidate Joel Embiid deserves further examination. Poeltl is holding Embiid to 42.9% from the floor on 35 shot attempts. But what’s more, he’s only allowed Embiid to take 6 free throws during the nearly 77 partial possessions he’s spent on him. This is a far cry from the 17.4 free throw attempts Embiid typically averages per 100 possessions.

And like Hakeem Olajuwon, Poeltl is a master at navigating the 2.9 position of the paint without getting called for a defensive three seconds. (Turn your volume up.)

“I think that has a lot to do with reputation as well, where just being around for a long time, you figure out these little things," Poeltl said. "I remember my first couple seasons in the NBA — first of all, I was a lot more paranoid to get called for defensive three seconds, and I probably actually was getting called on it a lot more as well. So, I think the biggest thing there that I had to figure out over the years is the timing of it. Like, being in the paint at the right moment when an offensive player — like a guard or somebody — is trying to attack. Not wasting those three seconds. Like, standing in there when there is nothing happening.

"Then, I have to go out [of the paint] to clear myself, and in that moment somebody starts driving, and then I’m late for the rotation. So, again, it comes down to timing it well, [and] trying to read what the offense is trying to do.”

In staying with the topic of great defenders, the best not only omit shots as they come, but also deter would-be trespassers from entering their hunting grounds entirely. Poeltl looks like he’s trending towards no-fly-zone territory.

After peaking in January, his number of contests per game has gone downward — an indication that offensive players may have finally learned their lesson. 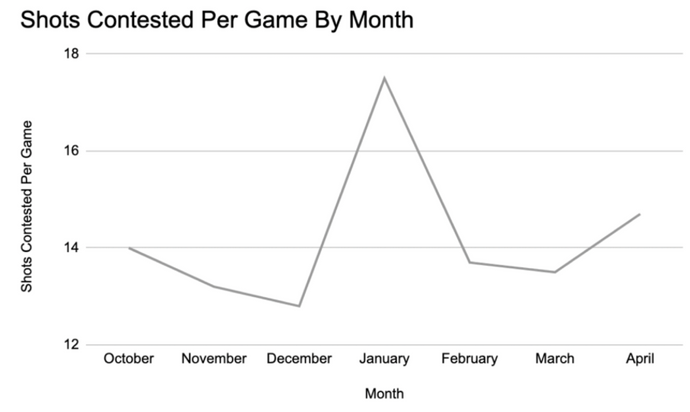 Poeltl's presence on the interior is almost reminiscent to that of the Dark Knight in Gotham City. Both Batman and the Spurs' rim-protector serve as a cautionary symbol of what will happen when you cross the line.

“I don’t know if I’d call myself a vigilante.” Poeltl joked. “I pretty much always try to make the paint look as crowded as possible. Try to discourage the other team from driving in there. At the end of the day, contesting a shot is good, but if I can make it look crowded in the first place and discourage them from coming in the paint, that’s already a win in my book.”

With shades of the various all-timers painted all over his game, is there a particular player that Poeltl has consciously modeled his game after?

Stating that he’s just trying to find his way is an undersell.

In fact, Poeltl has more than found his own way. He’s an elite shot-blocker, a vocal defensive quarterback and a serious contender for an All-Defensive Team nomination.

But most important of all, he’s San Antonio’s newest watchful protector — the franchise's next great defensive big man.