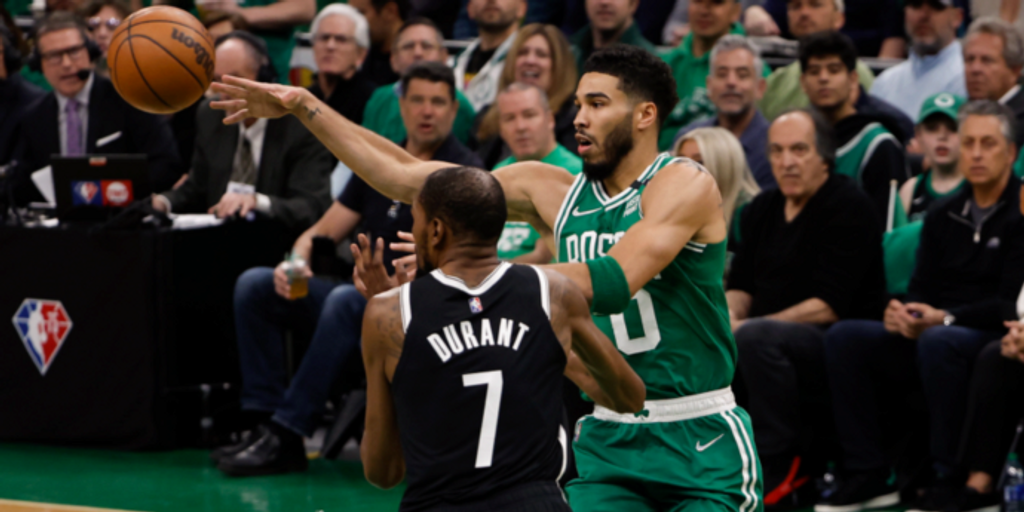 Jayson Tatum is much more than just a bucket-getter

As humans, it’s in our nature to simplify topics to help enhance our perceived understanding of them. Simply put, we like putting things in boxes.

For Jayson Tatum, the box he’s long been secluded to is "bucket-getter."

In some respects, this is a noble designation, considering the essence of the sport is to, how you say, get buckets. However, the taxonomy has a limiting quality that comes with it. You see, the impact of players that fall under this archetype typically caps off in the low-end All-Star territory — a far cry from Tatum’s megastar ambitions.

So, to burst through this glass ceiling, Tatum has become something else. He’s become someone else (The Green Arrow?).

He’s transformed himself into a generous facilitator and a stalwart defender, and that maturation was never more apparent than in the role he played in the Celtics 4-0' conquest of the Brooklyn Nets.

His passing development is best cataloged through the lens of Ben Taylor’s Passer Rating (a 1-to-10 measure of a players passing ability) and Box Creation (an estimate of open shots created for teammates per 100 possessions) metrics.

As you can see, Tatum began his career as a horrid passer (for reference: Moses Malone once penned a 2.6 Passer Rating). Nowadays, his playmaking numbers are some of the best in the league, as he finished the 2021-22 season ranking in the 90th percentile in Box Creation.

We've seen a similar growth curve from other athletic forwards who began their All-Star reigns as pure scorers, and then, graduated into MVP candidates by improving their passing.

Tatum’s Celtic progenitor, Paul Pierce, began his career with a Box Creation output of 1.7, only to finish in the 92nd percentile in creation in 2015-16 (once again tying Paul!).

(Keep in mind that Leonard and Pierce were both 28 when they made their playmaking peaks; Tatum just turned 24.)

A huge part of Tatum’s synthesis as a passer and playmaker can be credited to his strength. The Nets often tried to load up on Tatum in a fashion similar to the way the Celtics did so with Durant. And yet, unlike Durant — who was battered into a barrage of contested jumpers — Tatum continuously found ways to knife his way into the eye of the storm. During the series, Tatum took an average of 8.5 shots at the rim per game, while Durant managed a mere 1.7 (per Dunks & Threes).

Tatum wasn’t converting on these looks at his usual rate, but his ability to consistently get two feet into the defense's place of worship forced the Nets to sink in on his drives, and that shift empowered Tatum to spray passes out to his loosely guarded contemporaries.

The immediacy with which he relieves himself from custody of the rock is another key to his progress in the playmaking department. Last season, when Boston played the Nets (albeit without Jaylen Brown), Tatum was handling the ball for 4.48 seconds, and he took 3.40 dribbles during those possessions. This time around, he only held the ball for 4.06 seconds and produced only 2.95 dribbles per touch.

This change in time may not seem significant, but a half-second here and half-dribble there can be the difference in a few inches of airspace for his teammate. And like Tony D’Amato said in Any Given Sunday, "Life’s a game of inches, g**damn it!"

Tatum is making decisions swifter and more precisely than ever before, and it shows in his postseason Box Creation score of 12.6 (third among postseason participants).

Sticking with our previous comparisons, Pierce and Leonard both authored two No. 1 ranked defenses with the franchises that drafted them.

(Pierce did it behind the watchful eye of Kevin Garnett in 2007-08 and 2011-12, while Leonard was the keystone to an impenetrable wall of defensive superiority from 2015-17.)

This iteration of the Celtics just completed this feat for the second time since Tatum started tending to the TD Garden in 2017-18, and one could reasonably argue that he may have been the third-best guardian on a unit with two potential All-NBA defenders.

Like Pierce and Leonard, Tatum relies on a tantalizing blend of strength and length to bother players of all shapes and sizes. Against the Nets, Tatum forced over 2 turnovers per 75 possessions (that includes steals, blocks and charges).

As for Durant, Tatum not only used his aforementioned strength to bully his frailer adversary around on the perimeter, but he also leveraged his length to meet KD’s shot at its zenith in a manner we haven’t seen since Giannis Antetokoumpo.

Other than Giannis and Tatum, who else has the ability to block a Kevin Durant jumper at its apex? pic.twitter.com/mAmHHqkpiH

And while slowing Durant has been a team-wide endeavor (every player that played significant minutes shadowed him at one point or another), Tatum’s individual work is nothing to scoff at.

In over 30 minutes of guarding him, Tatum held Durant to 3 of 18 shooting in a performance that garnered comparison to the containment job Pierce executed on LeBron James in 2008. For the record, Leonard also has a superstar stymie on his resume — that being his famous walling off of Giannis in 2019.

James, Antetokounmpo and Durant experienced significant decreases in volume and efficiency when they went up against this troika of star wings.

It’s also worth noting that Pierce and Leonard both captured NBA titles during the postseasons they administered their signature shutdown performances in.

Overall, Tatum’s recent stretch of play pushes him from bucket-getting All-Star to a borderline top-10 player in the NBA. And future improvements around the margins could lead to Tatum ascending into the all-time pantheon of two-way forwards — right next to Pierce and Leonard.

“Tatum, at the end of last year, was thought of in this league as a great scorer. Now, he is a great player, and it is because he has become an outstanding defender and a willing — and very good — playmaker.”