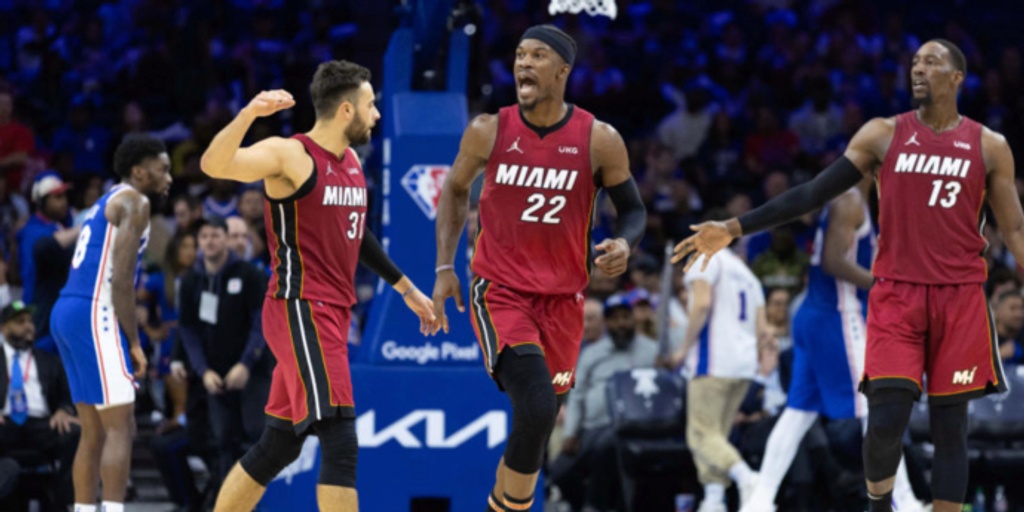 In Philadelphia, Jimmy Butler gets the last laugh

The ball bounced twice on each side of the rim before going in.

Kawhi Leonard’s nearly impossible game-winning fadeaway jumper over the outstretched right arm of Joel Embiid ended a seven-game thriller of a 2018-19 Eastern Conference Semifinals. The series saw the Toronto Raptors escape with a 92-90 victory over the Philadelphia 76ers, in large part due to underwhelming performances from Joel Embiid, Ben Simmons and Tobias Harris all series long. Those were expounded upon here just last month. In fairness to Embiid, similar to these 2022 playoffs, he was injured as hell. He tried his best.

Jimmy Butler wasn’t perfect for the Sixers that spring, but he was a hell of a lot better. He averaged 22.0 points, 7.0 rebounds and 5.6 assists in the series, with by far the team’s best offensive rating at 118, not counting Amir Johnson who played a mere (ha, get it? Never mind) 20 minutes. Yet and still, the Sixers were right there, and had Leonard’s shot missed, who knows if the Sixers would’ve went on to defeat the Milwaukee Bucks and Golden State Warriors as the Raptors did en route to their first NBA championship?

Regardless, those four bounces led to Butler’s fate: he was signed-and-traded to the Miami Heat that very summer. Instead of keeping Butler, the Sixers chose Simmons, Harris, Brett Brown and Al Horford.

Jimmy Butler: “Tobias Harris over me.”

Simmons and Harris both received max contract extensions in the summer Butler was dealt to Miami.

Miami was where Butler wanted to go. They were his top choice.

1. Since “why’d the Sixers let Jimmy Butler go?!” is a big topic today, figured I’d do a thread on what I’ve put together from the past few years. Some of this I’ve written before, some not. Figured would be helpful to put it all in one place. So👇👇👇

Since Butler became a member of the Heat, the Sixers have still been a playoff team. In the 2019-20 season, which was obviously paused in March due to COVID-19 before resuming in the summer, the Sixers earned the sixth seed in the Eastern Conference and were swept in Round 1 of the playoffs by the Boston Celtics. Simmons didn’t play in the playoffs due to injury. Those same Celtics lost to the Heat in six games during the Eastern Conference Finals, and a Butler-led Miami team reached its first NBA Finals since LeBron James’ 2014 departure. The Heat, who were a five-seed in the East and top three or four for most of the season, lost to the champion Los Angeles Lakers in six games, but not without a historical postseason from Butler.

In 2020-21, the Sixers were the Eastern Conference’s top seed after compiling an impressive 49-23 record in the 72-game season. Unfortunately, they were embarrassingly defeated on their home floor against the fifth-seeded Atlanta Hawks in Round 2. Simmons still hasn’t played since, and despite Embiid’s play, he was once again let down by those around him.

Butler and the Heat? Well, after a little seven-week break between the end of the NBA Finals and the beginning of training camp for the 2020-21 season (as opposed to the standard three-plus months even a Finals team would get in a typical league calendar year), the team flamed out and were swept by the Bucks.

Both teams were able to properly reset heading into the 2021-22 season, and as fate would have it, the No. 1 seeded Heat matched up with the No. 4 seeded Sixers in the semifinals. Butler vs. his old team, where Simmons and then-head-coach Brown no longer resided, but Embiid and Harris were among those who remained.

With a 4-2 lead on May 12, 2022, exactly three years after Leonard’s four bounces ended Butler’s Sixer tenure, he led his team, in a hostile environment that once rooted for his every move, to an emphatic 99-90 victory to end the Sixers’ season. Sure, 99-90 may not sound like much, but if you watched the game, you saw the Heat grind their way to a 19-4 run to begin the third quarter, mount nine-straight points to begin the fourth and build a 20-point lead as just five minutes remained before the Sixers cut the lead in garbage time.

In the modern NBA, organizations seem to take on the personality of their stars, for better or worse. But Miami identified one who matched their ethos, and Butler knew it would be the place for him. A place where villains are welcomed, as he once told Embiid. And a place that is, in their own culture, counter to what their own city is admired for. Miami, to outsiders, is revered for partying, glamour and beaches, but the Heat are respected and occasionally mocked for a culture that is driven by blue-collar work ethic. It's an identity that requires being in “Heat shape,” playing defense-first, developing undrafted rookies into future rotation players and adding the occasional stars who fit into that identity.

The Heat are also known for their persistent fight, for being a pain in the ass for whoever opposes them and for being an overlooked team that is tailored to those who prioritize winning over highlights.

James Harden was brought to Philadelphia to lead in moments like these, but he did anything but that. Butler, who had often been compared to Harden as a byproduct of playing similar positions, dropped 32 points with 8 rebounds, 4 assists, 2 blocks and a steal in a closeout game. Harden had 11 points on 4-for-9 shooting, taking one shot in each of the final two quarters. He said the ball didn't get back to him. That's the guy who had the Sixers' second-highest usage rate in the series. Butler is now averaging 28.7 points, 7.6 rebounds, 5.4 assists, 2.1 steals and on 53/36/81 shooting splits in the playoffs.

Butler doesn’t (yet?) have a championship. Most players don’t, including many greats, but Butler is a winner, a leader and someone Embiid's career misses dearly for good reason, even while he could look at his bench and see another all-time wing in Harden beside him. But basketball isn’t strictly about  numbers, or strictly in between the lines, or strictly any one thing. It encompasses everything. And that’s what the Sixers and many have failed to realize when assessing Butler’s greatness.

But in Philadelphia, exactly three years after it all ended, he had the last laugh.

Exactly three years after Kawhi Leonard's shot ended Jimmy Butler's last game as a Philadelphia 76er, he returned -- with the organization people made fun of him for joining -- to lead the Miami Heat to the Eastern Conference Finals.

And he did it in Philadelphia.