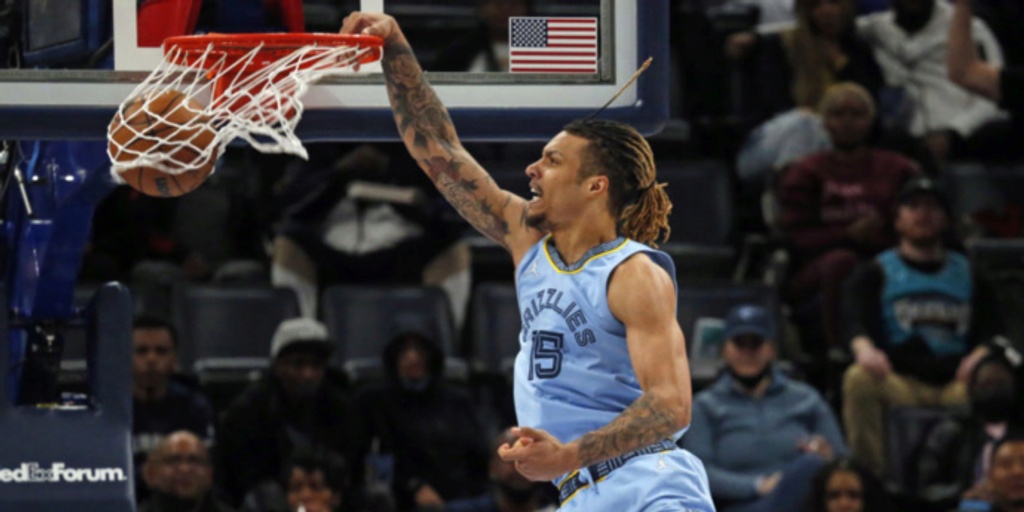 Brandon Clarke is slipping through the cracks

Much was made about Steven Adams' role in the Memphis Grizzlies' Game 1 loss to the Minnesota Timberwolves. His lack of mobility made him a natural fit for drop coverage, and drop coverage gave the Wolves -- namely Anthony Edwards -- pockets to attack in the half-court.

There was a shift made in Game 2, astutely pointed out by our own Mat Issa and Justin Lewis: almost no Adams (2:50 of game time), a whole lot of Xavier Tillman and Brandon Clarke (nearly 42 combined minutes) and infinitely more ground coverage defensively. Ball screens were played higher and switched more frequently. The Wolves didn't score with the same ease.

To that point: The Wolves generated roughly 1.08 points per possession (PPP) on trips featuring a ball screen in Game 1. That number has dropped to 1.01 PPP across Game 2 and 3, per Second Spectrum tracking data.

Mission accomplished for the Grizzlies.

I have a question, though: why isn't more being made about what that rotation tweak has done to the Grizzlies' offense?

No disrespect intended to Tillman, but that boost is almost completely attributed to the connection between Ja Morant (it's been weird series for him, to say the least) and Clarke. Through three games, the Grizzlies are scoring nearly 1.2 PPP on trips featuring a Morant-Clarke ball screen, and a ridiculous 1.3 PPP when a possession ends with a hookup between those two.

A couple of notes on that, before we dig into the film:

I've bored you with enough numbers. Let's look at the why, shall we?

To understand Clarke's place in the Wolves' demise, you have to get into what the Wolves want to accomplish.

This is an aggressive bunch. They want to take away airspace when defending pick-and-rolls, force the ball out of your playmaker's hands and then rotate behind that pressure to create turnovers or swat shots away at the rim.

During the regular season, only the Portland Trail Blazers (15.4 picks per 100 possesions) hedged or outright blitzed pick-and-rolls at a higher rate than the Wolves (14.6).

For big men trying to create offense against this scheme, a comfort in space -- as passers and scorers -- is required. There's a reason the Stephen Curry-Draymond Green combo has been eating people's lunches for darn-near a decade. Draymond is such a smart passer and quick processor that any cracks in your defense will be beat.

Clarke isn't Draymond, but he's both a better athlete and intermediate scorer. Showing high against pick-and-rolls featuring Clarke plays into his gifts. He's able to slip against pressure, has a wildly effective floater -- evidenced by his career 50.5% clip on shots between 3-10 feet -- and passes well enough to make help defenders pay if they drop down into the paint.

These are missed opportunities, but I want to give you an idea of the kind of plays that are available with Clarke in the mix.

In order, we've got:

These are the goods.

And again, it's worth pointing out Clarke's ability as a scorer. He has feathery touch that you can track back to the latter portion of his college days. That, plus his ability to handle the ball, allows him to make plays on the roll. Add in his leaping -- no, wait -- gliding ability and you have yourself a pretty dynamic roll threat.

Clarke is averaging 16.5 points while converting roughly 69% of his twos over his past two games. It might be time for the Wolves to go to the drawing board.

We've already seen them try to adjust. Karl-Anthony Towns' foul trouble surely played a part, but it was interesting to watch the Wolves try to pre-switch and have a quicker player take on Clarke. In the video above, you can see Malik Beasley (first clip) and D'Angelo Russell (third clip) attempt the job.

But guards aren't used to defending ball screeners. Maybe we'll see more outright switching (and scram switching after that) to flatten out the Grizzlies' attack. The Wolves are gonna have to do something.