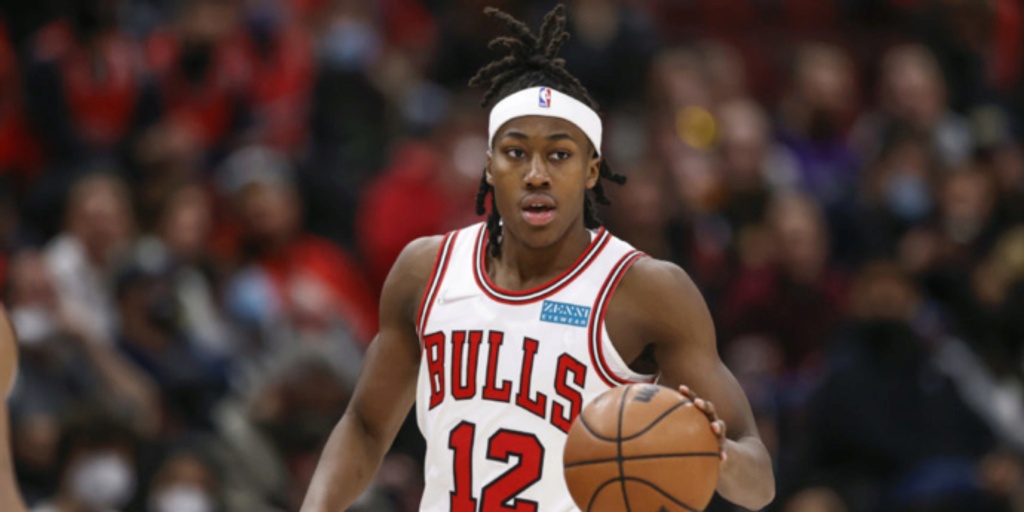 How the Bulls are maximizing Ayo Dosunmu as a ball-handler

The Chicago Bulls have cemented themselves as one of the top tier teams in the NBA (sole possession of the top seed in the Eastern Conference), gritting through difficult injuries, rotational absences and adjusting their identity accordingly.

Their contender status is up for debate, but their ability to adapt throughout the season and maintain high-level play is not. Alex Caruso and Lonzo Ball, Chicago's dynamic backcourt tandem, are both out for a month-plus with injury, creating a significant void in ball-handling.

Ayo burst onto the scene immediately this season, blossoming as an energetic defender, swarming at the point of attack and simply getting his hands on E-V-E-R-Y-T-H-I-N-G.

Guys with his wingspan and broad shoulders are rarely able to slither in screen navigation like he does. He shoulder dips and uses absurd balance and coordination, shedding picks like an elite pass-rushing linebacker. Ball and Caruso are essential pieces to Chicago's success, but you couldn't really ask for better replacement play than what the rookie has brought defensively.

Since entering the starting lineup on Jan. 15 (10 games), Dosunmu has impressed, averaging 12.7 points, 4.7 rebounds and 6.5 assists on 67.1% True Shooting, and canning 45.7% of his threes (3.5 per game). The efficiency tracks with his play throughout the season, an impressive feat considering how much his role has ramped up. While he's had impressive flashes as a passer this season, the playmaking he's exhibited over the past 10 games with consistency has been remarkable. However, it's not coming through typical means, which is what makes it even more interesting to dissect!

Typically when you envision a guard or wing carving up a defense, it's via a high dose of pick-and-rolls, or downhill guile kicking out to wide-open shooters in the corner or slot.

Ayo is running just over five pick-and-rolls per game over this stretch after operating within them sparingly to start the season, and the craft has been very fun and surprisingly effective!

He's rejecting screens! The pocket passing has been kind of absurd too. You know it's coming, you know he wants to get to it, but Dosunmu's ball placement has been exceptional, occasionally even throwing some lead passes that turn the head. He's great at making it clear that he's keeping his options open even if it seems simple to sell out for the pocket pass.

Defenses can't really just let Ayo do funky Ayo things with the ball in his hands either, and have to play him honestly. He is absolutely scorching the net, shooting 64.0% on 2.5 pull-up twos per game according to Second Spectrum tracking data, and that just can't be legal.

It's a small sample size, but it's enough of one with that efficiency where the defense has to contemplate what it's doing. Dosunmu's been so great at selling anonymity. Like I mentioned earlier, you can tell in watching that the pocket pass is there, and he wants to make it happen. But, his decision-making is split-second quick, keeping the defense's attention for as long as possible until the ball is either headed to a teammate or the rim.

He's taking the floater if it's there as well and converting 56.0% of his attempts from 4-to-14 feet (pretty good!) per Cleaning the Glass. Again, it's on small to moderate volume, but the touch has been undeniable.

Dosunmu's game is predicated on his speed and burst making him such a lethal threat when he gets an open lane. In spite of rarely commanding defenses to go over on screens (he's shooting 31.0% on above-the-break threes over this span and doesn't take many), a poor angle in screen navigation creates enough of a gap for him to extrapolate.

Reconnect on the back end, as he is walled off by a big or when he faces pressure, and my favorite aspect of his burgeoning playmaking shines. Ayo Dosunmu LOVES a jump pass!

Part of me likes to think this is coming from playing alongside one of the NBA's premier jump passers (DeMar DeRozan), but Ayo would dip into this bag at Illinois routinely. His two-man game with Nikola Vucevic has thrived in no small part to his proficiency as a jump-passer.

These aren't the "bad" jump passes your high school coach would yell at you for. Upon first glance, a jump pass may appear as an escape out of a failed drive, but that's a misunderstanding of his game. Dosunmu is probing and scanning his options even if he isn't turning his head; he's a fantastic court-mapper, conscious of his surroundings at all times and where his outlets are. By utilizing his athletic pop and craft as a threat, it opens up Vucevic in so many pockets that he's thriving from as he's put together one of his more consistent stretches of play this season.

However, there are limitations to Ayo's pick-and-roll game at the moment. As noted, he's a growing but relatively basic shooter. He hasn't tried to pull from behind screens when his defender dips under (an area for growth!) and his limitations as a ball-handler prevent him from more self-created offense.

While Dosunmu does create the open shot here, Shai Gilgeous-Alexander shines a light on his handle. To be fair, SGA does a really solid job using his length and sticking with Ayo on his hip, but that's the point. If he doesn't get any separation from a screen, the rookie struggles to create separation for himself. He lacks the wiggle and shake on-ball to get the most out of his superior burst.

He thrives in spite of this, and that's what's been most encouraging and fascinating about his utilization in Billy Donovan's offense!

The pick-and-roll reps rope you in. The Thadgic Johnson-akin role is what makes me refinance the mortgage on my house and pre-order Bulls season tickets for 2023.

Thad Young earned that nickname last season taking over as a post-hub early in the season, floating in and out of space and making the most of quick decision-making, precise passing and opportunistic scoring to buoy Chicago's offense.

Ayo and Thad have different builds and archetypes to be sure, but they possess similar skills that can be used to buffer an offense, polishing the edges and opening up even easier looks for primary scorers. The former has shown more as a shooter this season, but both he and Thad leave you a bit wanting more in that department. Defenses didn't typically guard Thad as a floor-spacer during the year Jim Boylen tried to use him more often in the corner, and defenses don't typically guard Ayo when spaced above the break and are more lax on him in the corner in spite of hot shooting there.

Donovan has seemingly seen them through similar lenses. They have the skills to attack space and make the most of it in spite of limitations as shooters. So why station them in the slot routinely and expect them to be guarded? Getting creative has opened the door for more effective (and more fun) offense.

Rather than the high-post distribution of Young, Donovan has employed Dosunmu as a sort of drink-stirrer in early offense.

Ayo is often tasked with bringing the ball up off of opposing makes, often running into quick, early-offense actions (especially as a dribble-handoff operator). So instead of him going down the court and spotting up in the corner, his speed is used to force the defense to guard him. Give him a quick high screen, and he's greasing the offense with a gallon of WD-40, bending the defense and getting the offense kicking into gear early. He's not a primary ball-handler, but he has primary aspects that can't be left unchecked in open space!

According to Second Spectrum tracking data, Dosunmu is scoring roughly 40% of all of his baskets in early offense, shots coming within the first 9 seconds of the shot clock.

Catch a defense lacking, and Ayo turns on the jets.

It's hard for his handle to impede him when he gets this much space and open lanes.

So even if the defense collapses, he's moving the ball ASAP. If he has to pick up his dribble, he doesn't need to scan the floor, he reads, reacts, and my favorite part — he repositions and relocates himself immediately. Doing things quickly with purpose and knowing where to be and how to move are incredibly minute parts of the game, but they can have a sizable impact.

According to Second Spectrum, Dosunmu is currently averaging the second-most touches per game on the team over the last 10 contests, which only trails Vucevic. His average time of possession per touch is less than that of DeRozan, LaVine and Coby White. 85.2% of his shots come within 6 seconds of touching the ball and nearly two-thirds within 2 seconds.

Things happen fast with Ayo Dosunmu: drives, passes, dunks, defense and his development. The last 10 games have hinted at signs for things to come with Ayo as he grows, and I'm extremely interested in what the future holds for him over this next month as he continues to maintain a larger role in Chicago.

If something happens, it's undoubtedly going to happen quickly!