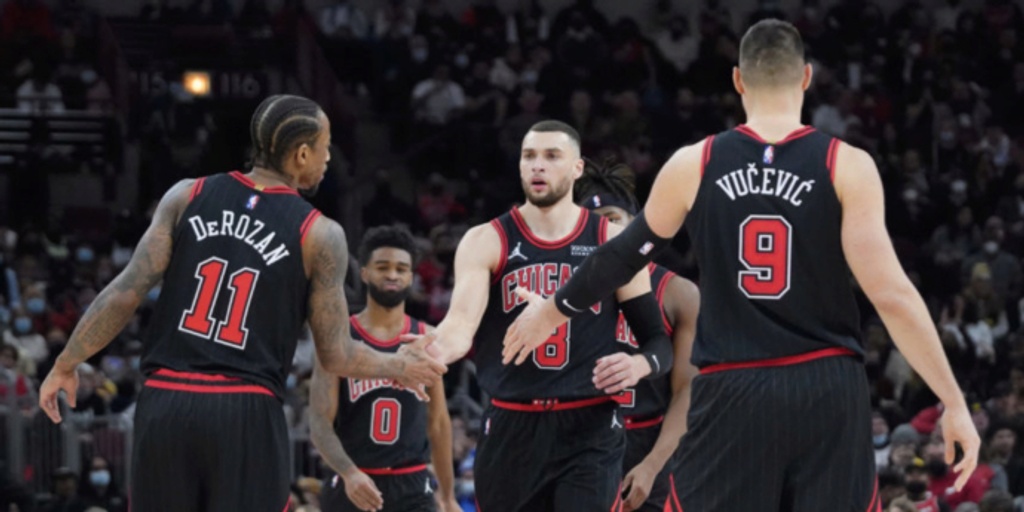 Can the Bulls go all-in for a title? Should they?

40 games into the 2021-22 NBA season, the Chicago Bulls stand alone atop the Eastern Conference standings with the third best win percentage in the league. Their 27-13 start is an impressive flip from their 18-22 record at the same point last year, in an arguably more competitive conference than in years prior. The Bulls notably haven't made the playoffs since Fred Hoiberg's second season as head coach with one of the uhhh ... most interesting roster build experiments in recent memory.

This was only 5 years ago pic.twitter.com/LEKVnSUeV6

The Bulls have legitimately carved their path this season — they're 15-10 against the current top-10 seeds in each conference. They beat up on the bad teams, and have also shown their worth against playoff teams. However, they are only 3-5 against the top teams in the league and only have one top-8 win outside of their two wins against Brooklyn. That is of course not everything, and the Bulls have been impacted by injuries and COVID absences, but the majority of the teams in the NBA can make a similar claim.

Chicago is a very good basketball team, much better than most expected coming into the season (maybe even better than the front office expected), but they have some notable flaws when looking at the highest levels of team play in the NBA. While I of course disagree with writing them off as a playoff team, I'm not sure how to view them as a true contender. Being this good is GREAT, but it brings up difficult questions for an organization.

The defense that inspired early in the year has fallen off, dropping significantly each month, down to 26th in defensive efficiency since Christmas, per Cleaning the Glass. Alex Caruso has missed a great deal of time and his impact has been heavily missed, but the overall activity and attention to detail just hasn't quite been there in the same way.

Patrick Williams entered the year with a great deal of expectations for his sophomore campaign — with Chicago looking for a guy who would hopefully paper over some of the concerns over lack of a bigger wing defender and function as a vital cog in the offensive flow. Unfortunately, he only managed five games before being lost for the season due to a severe wrist injury. The Bulls have struggled to find a consistent fifth option release valve who can capably space, defend, and be a neutral or better decision-maker all in conjunction.

DeMar DeRozan has played at a level that will place him on MVP ballots. Zach LaVine's own All-NBA play has been overshadowed to a degree by his teammate. It is so hard for an organization to look at this year — with two players performing this well — and deciding to just ride it out, in spite of the ability to make moves to better equip themselves for a postseason run. While I wouldn't expect a steep decline from DeMar next season, it's of course a reality that seasons like this are not often replicable, especially considering his age. Contention windows are smaller than typically believed or theorized, and man they are fickle.

Speaking of possible moves to make — they exist because of intrigue caused by the youth on the Bulls' roster. Wendell Carter Jr. has excelled in Orlando this year (and was unfairly judged in Chicago), but moving on from him was a necessary part of Chicago's forward progression. While Nikola Vucevic has struggled this season (he's been better from the field recently, but his three-point range hasn't been there), he's still been essential to the Bulls when they're at their absolute best. It's also important to note that moves don't just happen in a vacuum. If the Vucevic trade isn't made and the Bulls don't show their full commitment to a playoff push and winning with Zach LaVine last season, it's reasonable to assume that that would negatively impact the likelihood of any of the signings that took place the following off-season.

Would it be nice to have Wendell, those first-rounders, and still have this same team? Hell-freakin'-yes, but that's not how it works!

When I talk to scouts, coaches, or fans, often the idea of 'threading the needle' and winning with a team while still maximizing youth development is brought up. That is just so difficult to actually do. Patrick Williams could develop into a very good basketball player — in fact I would bet on it — but I do question how capable he is of reaching his best possible outcome in Chicago. He's been cast into a smaller and different role while simultaneously being given small margins for error. That's without even taking into account his unfortunate injury.

Coby White's stellar player (read this article by Larry Golden if you haven't, it's fantastic), has thrown another variable into the equation. Since returning from health and safety protocols on Dec. 19, through 13 games, Coby is averaging 16.0 points per game with incredible efficiency (66% True Shooting percentage), bombing from deep (43.2%) and is overall more comfortable and adapted to an off-ball role as a secondary scorer off the bench. His defense, while still relatively poor, is much improved from last season. He's playing fantastic basketball and has been a significant positive for the Bulls over the past month.

I don't have an answer as to what the Bulls should do. In some ways, I'm not sure that there is a right or wrong answer. Staying the course, maintaining stability, and not selling out for a potential title shot may be the right move for a team that's struggled to find its footing since Derrick Rose's injury. Maybe exchanging youth for established talent to round out the roster, bolster depth, and shore up perceived weaknesses is what sets up a deep playoff run and plants the seeds for the next great crop of Bulls basketball — perhaps luring in veteran free agents or opening the door to the next star who wants out of a poor environment this off-season.

I could write all about how I think trading for Harrison Barnes would add a valuable elite shooter and four who can draw defenses in the slot (something the Bulls strongly lack). Or about Jerami Grant's potential to make an impact defensively with his length and tenacity at the point of attack, or roaming weak-side in the Bulls scheme while doing enough offensively to be guarded. I HAVE written about how I think Arturas Karnisovas should look to pry Jalen McDaniels away from Charlotte to add another rotational forward with upside, all while not giving up as much as one of the veteran deadline darlings may require.

Ultimately, the Bulls may well end up surprising us again in the playoffs without any change, even if I doubt the chances of that. There is no simple solution, nor is there a defined formula, and that's what makes the Bulls so fascinating from a team-building standpoint. How the Bulls decide to capitalize is one of the more interesting storylines to follow, as we head toward the Feb. 10 trade deadline. Getting good fast makes things uncertain, but that's positive pressure that many organizations can only hope for.