Growing up a Buck: From Ray Allen to Giannis, my dad remains in Milwaukee

My family first arrived in Milwaukee, Wisconsin in 1997 when my dad, Dave Babcock, accepted a job in the Milwaukee Bucks’ front office. Many things have changed for the Bucks since then, as there have been five different general managers, nine different head coaches and countless assistants, staff members and players. The team owner that hired my dad, Senator Herb Kohl, sold the team to two businessmen, Wes Edens and Marc Lasry, in 2014, and the team no longer plays in the Bradley Center — their new home is the Fiserv Forum.

Despite all of the changes, there is one thing that remains the same: My dad still works for the Bucks and currently serves as the team's director of player personnel. I have previously shared some of my experiences related to the Bucks within my family’s first five years in Milwaukee. Now, I’d like to outline the years between then and now -- from my perspective, of course.

Coincidentally, the rise and fall of the great Bucks team that nearly made it to the NBA Finals in 2001 and featured star players Ray Allen, Glenn “Big Dog” Robinson and Sam Cassell happened to align exactly with the period I was in high school. When I graduated in 2002, I wasn’t the only one with dramatic changes on the horizon.

Within two years, following that '01 playoff run, the Bucks had traded away all of their star players and fired head coach George Karl, and general manager Ernie Grunfeld had left for a comparable role with the Washington Wizards. In 2003, the Bucks hired Terry Porter to be the new head coach and promoted Larry Harris to general manager. Following all of the trades, the only remaining players from the '01 team were Michael Redd, Tim Thomas and Joel Przybilla. The team had been completely transformed in the blink of an eye. It was a full-on rebuild. Needless to say, everything was different.

Because I had extremely injury-ridden seasons in both my freshman and sophomore years of college, I was in Milwaukee a lot more than I had expected to be. Due to all of the shake-ups of the Bucks’ coaching and front-office staff, most of my “Bucks friends” had left Milwaukee: Ernie Grunfeld’s son, Dan, George Karl’s son, Coby, and assistant coach Don Newman’s daughter, Devan, were all gone. This left me as a bit of a lone ranger at the Cousins Center (the team’s practice facility) and the Bradley Center in comparison to how things had been the previous handful of years. My activities with and around the team had changed quite a bit, too.

I was no longer a young kid running around being careless and playful. I was taking my playing career -- and my intended future career working in basketball -- seriously, and tried to use the opportunities and resources I had gained through the Bucks to my advantage. Because of my knee injuries, I was limited in what I was cleared to do on the court, but regularly had physical therapy sessions with the Bucks’ knee specialist, trained with the team’s strength-and-conditioning coach and spent countless hours in my dad’s office watching film and picking his brain about players and his business in general.

I was given the opportunity to observe scouting meetings and sit in the suite with the front-office staff during games. During the summers, I volunteered to help the Bucks in the pre-draft process -- driving prospects to and from the airport, serving as a rebounder and passer in workouts and joining my dad and Harris at dinners when they hosted draft prospects. I was even able to be in the war room on draft night on multiple occasions. Harris was extremely kind and generous, always welcoming me to be around. In hindsight, I think he was able to relate to me, as he grew up an “NBA kid,” too. His dad is Del Harris, a longtime NBA head coach. These were invaluable experiences, and they provided me with a huge head start once I began working in basketball following my playing career. 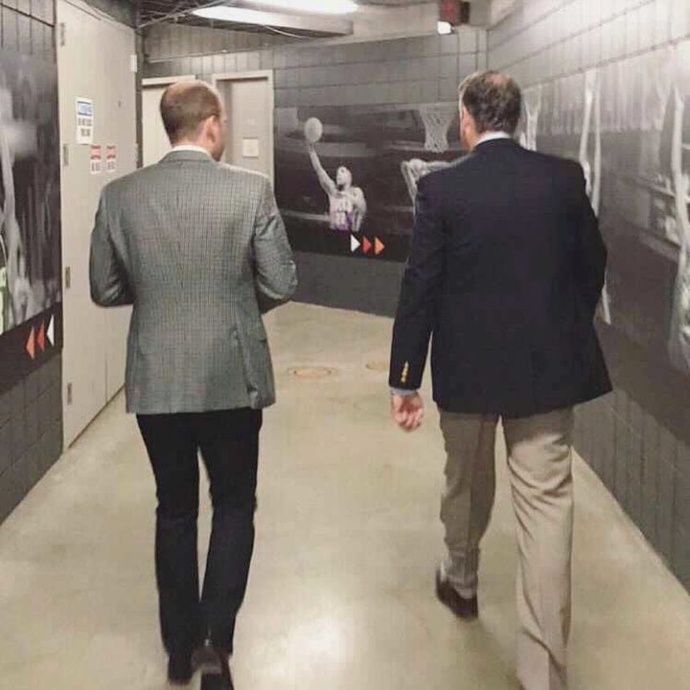 After I finished school at the University of Arizona, I had a brief stint coaching for a professional team in Italy. I then moved to Los Angeles, where I bounced around from one sports agency to another, working for companies including Wasserman Media Group, Excel Sports Management and ASM Sports, all within several years. In 2009, one of the Bucks’ star players at the time, Andrew Bogut, introduced me to his agent, David Bauman. Long story short, I began working for Bauman’s agency, DB Hoops.

Bauman had previously been an understudy of the famous agent David Falk, and in addition to representing Bogut, Bauman also represented NBA players Ron Artest (a.k.a. Metta World Peace), Peja Stojakovic, Vladimir Radmanovic and Gary Neal, to name a few. Although he had an impressive client list, Bauman had been operating his company essentially as a one-man show. He created a role for me to be his right-hand man. I assisted him with everything related to managing his clients and running his company, which was a terrific opportunity for me as a young guy trying to make my way in the business. One of my primary responsibilities was to target and recruit new clients to the company. For the clients that I brought to the company, I had a more hands-on role in managing their day-to-day matters as opposed to being at arm's length with the management of players like Artest, Bogut, and Stojakovic, who had been with the company prior to my hiring.

The first player I was able to bring to DB Hoops was Kentucky Wildcats star Jodie Meeks. Ironically, shortly after we signed Jodie, he was selected No. 41 overall in the 2009 NBA Draft by none other than the Milwaukee Bucks. My dad had called me on draft night to notify us of Milwaukee's decision to select him before it was announced by then-NBA Commissioner David Stern, which was a pretty neat moment for my dad and I to share. In the following years, I negotiated free-agent contracts with the Bucks for my future clients, Miroslav Raduljica and D.J. Stephens. I had gone from being an “NBA kid” running around decked out in Milwaukee Bucks practice gear, to being a young professional wearing business suits to see clients. It was certainly a unique transition, but the Bradley Center still felt like home, nonetheless.

Since my dad joined the Bucks in 1997, his occupational titles have varied from Assistant Director of Scouting to Vice President of Player Personnel, and at one point he even served as Interim General Manager. At times he has been involved in trades, free-agent signings and the hiring and firing of coaches, but his main responsibility has always been to have comprehensive knowledge of the NBA Draft each year.

Because general managers have so many responsibilities outside of scouting, it generally leaves them limited on the amount of time they can spend evaluating players in preparation for the draft. From my impression, top picks are usually hand-picked by the teams' general managers with some input from their scouting staff. For later picks, especially second-round picks, general managers tend to lean heavily on guys like my dad to help them select players. The unfortunate truth about the NBA is most draft picks do not have overly successful NBA careers. Even worse, most second-round picks do not stick in the league for more than a couple of years, if at all.

Since my dad joined the Bucks, they have selected the following players in the second round:

A stellar list of second-round picks, to say the least. Despite all of the success my dad has had in assisting the Bucks find talent deep in the draft, perhaps the greatest success in his career was playing a pivotal role in the 2013 NBA Draft. Milwaukee drafted a little-known prospect from Greece named Giannis Antetokounmpo with the No. 15 pick that year, and since then, Giannis has emerged as one of the best players in the world. He has been named the NBA MVP twice and is the key to the Bucks having a good chance at winning their first NBA title since 1971. 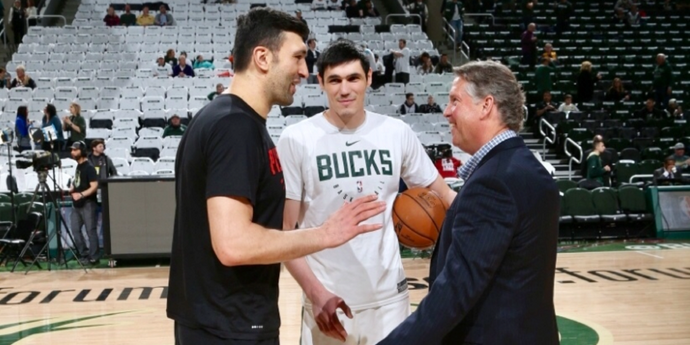 My dad has never been much of a self-promoter or an attention seeker, so I’ll do the boasting for him — my dad is really good at his job!

It has now been nearly 24 years since my family first moved to Milwaukee and my dad began working for the Bucks. Little did the team know when they decided to hire him that my dad and I were going to be a package deal — where he goes, I go. I have always leached onto my dad, craving basketball experience and knowledge. And it’s because he has worked so hard to have a stable, successful career that I have been given every experience and opportunity I could have ever asked for. And for those reasons, I cannot thank him enough.

Throughout my dad’s career with the Bucks, I have gone from being a ball boy to representing multiple Bucks players as an agent to rooting on my dad’s team with my son, Matthew, Jr., and my daughter, Madeleine — as both wear Giannis Antetokounmpo jerseys.

The Milwaukee Bucks are a significant part of my family’s story and my own story, as well. A story that I am very grateful to have. 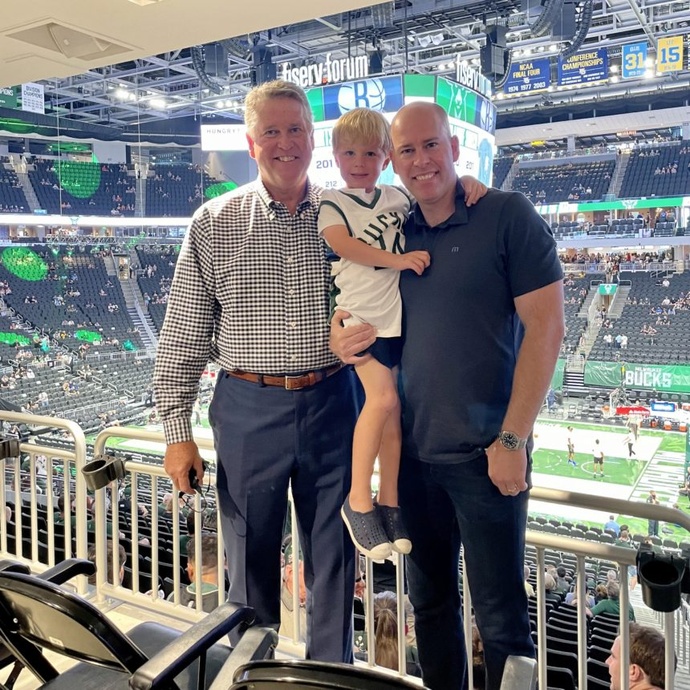