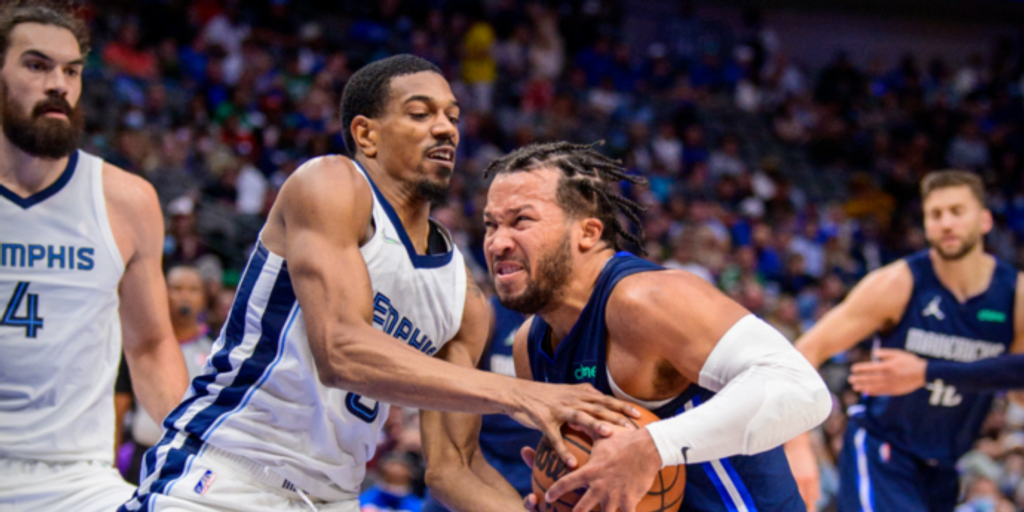 The Grindhouse: How the Grizzlies are winning with defense

The Grizzlies were in a weird place on November 26.

They were reeling, fresh off a double-digit loss to the Toronto Raptors, and not even a week removed from a 43-point loss to the Minnesota Timberwolves. Staring them in the face was a matchup with the surging Atlanta Hawks. A Trae Young-Ja Morant point guard duel seemed like appointment television.

And then, Morant hurt his knee.

The Hawks would win by 32, dropping the Grizzlies to 10-10. Honestly, it was a surprise they were .500 at that point; Memphis' offense was solid (109.6 Offensive Rating, 10th), but its defense (114.8 Defensive Rating, 30th) was easily the worst in the league. Now, the team had to find a way to keep the offense afloat without their best player.

Since the Hawks game, the Grizzlies have found answers. They're 6-1 since the Morant injury behind an even stronger offense; their 113 ORTG ranks 13th over this span. You can mostly thank Jaren Jackson Jr. (21.0 points in his last seven) and Desmond Bane (18.6 points) for taking on larger creation roles.

Even more shocking has been the defense. The Grizzlies haven't just improved — they've completely flipped the script. Their 93.9 DRTG — and an absurd 80 points allowed per 100 half-court plays, per Cleaning The Glass — leads the NBA by a wide margin.

There's something to be said about the sample — seven games is less than 20, though I'll wait for Woj to confirm — but you almost never see a team literally go from worst-to-first on a whim. There is a little context to add.

Chief among them, the Grizzlies haven't faced world-beaters offensively. Here are their last seven opponents' ranks in ORTG:

Miami is the best offense the Grizzlies have faced, and the Heat were without Bam Adebayo and lost Jimmy Butler early in that game. The OKC Thunder were a bad offense as-is; facing the Grizzlies without any of their top shot-creators led to [checks notes] the worst loss in NBA history.

So there, the Grizzlies aren't the best defense in basketball even if the seven-game numbers suggest it. Boom. We're all very smart. Right?

But there's a gap between "the Grizzlies look much better" and "the Grizzlies are 4-to-6 points stingier than the Golden State Warriors on defense" worth exploring.

Let's dig into that.

STRAIGHT TO THE POINT

As exciting and flat-out good Morant is at basketball, he leaves a bit to be desired defensively. It's rare for someone with his offensive workload to be a strong positive, but he's far from that. Though his effort has improved, his film is still littered with failed attempts to navigate screens and off-ball bloopers.

Even before he went down, the Grizzlies were a different defense when Morant was on the floor. By different, I mean they were five points better with Morant on the pine.

The on-off split makes sense on two levels; not only is Morant not a good defender, but his replacement in the starting lineup — Tyus Jones — is pretty sturdy at the point of attack. The other guy who's seen more rotational minutes as of late — De'Anthony Melton — is one of the best guard defenders in the league, period.

Screen navigation is important to what the Grizzlies do defensively. While their bigs can play aggressively when needed (more on that later), they prefer to drop them back. That puts strain on whoever is defending the ball-handler to fight over picks and stay attached.

Jones and Melton do that better than Morant does. Bane has held his own against guards, having most recently taken on the Russell Westbrook assignment on a handful of ball-screens.

Dillon Brooks, a feisty wing who isn't afraid of anything or anybody, has been a godsend to the defense since returning. Peep his matchup data, and assigments are littered with All-Stars or hopefuls: Fred VanVleet (roughly 49 possessions), Luka Doncic (34), Paul George (34) and Butler (31) top the list.

The stronger your point-of-attack defense is, the less likely you are to wind up in rotation. You don't have to send extra help, which means you box up the areas of the court that matter most.

For the Grizzlies, that means taking away the paint — they're allowing the ninth-lowest percentage of shots coming at the rim over their last seven contests — and taking away the corners. An absurd 5.5% of enemy shots have come from the corners, the second-lowest share in the league during this stretch.

They're able to do this by having a helper at the nail when necessary. In most cases, the Grizzlies have done a good job of keeping ball screens a 2-on-2 affair. But if their guard gets caught on a screen while in drop or "ICE" coverage, a player stationed at the wing will shade inside to cut off the lane, giving the guard defender time to recover.

Peep Bane on the play below when Melton gets hung up on the Dwight Howard screen:

The same principles apply when they play more aggressively in pick-and-roll, though they can get help from lower on the floor when called upon.

The Grizzlies send two to the ball against Doncic, but look at Jones and Killian Tillie (No. 35) on the weak side. Instead of Jones tagging Moses Brown on the roll, he plays between Tim Hardaway Jr. and Dorian Finney-Smith, while Tillie pinches in from the corner. That's likely due to the size advantage, but even in this clip, you can see how the Grizzlies prioritize shutting down the rim and the corner.

The point of attack has strengthened. The help is active and precise. What's left are the men in the middle, holding down the fort in a multitude of ways.

Steven Adams has long been a reliable defender. His Hulk-like strength makes him a booger to post-up against, but his size and understanding of angles allows him to be an effective drop defender. What goes underdiscusssed, however, are his nimble feet.

He isn't a switch big — his lateral mobility only goes so far — but he's able to slide fast enough and flip his hips quickly enough to execute more aggressive coverages when called to come higher.

The real treasure has been Jackson, someone whose defensive development has been something I was curious about heading into the season.

He's the poster boy of the Grizzlies' scheme versatility. He has the length and gap feel necessary to operate in drop coverage. His feet are quick enough to cut off quicker guards by playing at the level of the screen. When locked in, Jackson can hold his own against different archetypes when asked to switch out.

In short: this is what people were excited about coming out of college.

Opponents have had next to no luck scoring with Jackson involved. Per Second Spectrum, opponents are generating 0.61 points per possession on trips featuring a ball-screen targeting him over the last seven games.

That number probably won't last as the sample and competition grows — that's a "facing two Rudy Goberts at once" number — but the process has looked so much smoother for Jackson.

It's looked smoother for the Grizzlies, period. There's been more buy-in, more activity. If they can stay locked in on the little things, there's no reason they can't truly take off when Morant is back in the fold.