Through training camp and two weeks into preseason, Ben Simmons was standing firm on his decision to hold out and not report to the Philadelphia 76ers.

His agent, Rich Paul, had communicated that the All-Star point guard would no longer like to play in Philly, wasn't budging on his trade demand and was willing to sit out for as long as it took for that trade to happen—  regardless of fines or wages loss.

(Editor's Note: That changed on Monday morning, when ESPN reported that Paul wanted to work on a resolution with the 76ers to bring Simmons back to the team.)

Then, out of the blue Monday night, the Sixers got a very unexpected surprise. Simmons showed up unannounced to the Wells Fargo Center, took a COVID test, and started the process of his return. Prior to this, there had been no communication between Simmons and the organization, or the players, so how they move forward from here remains unclear.

But to delve into this topic deeper, I asked former 76ers Theo Ratliff, George Lynch and Larry Hughes what it would take for this reunion to actually work.

"To be honest, I always thought he was going to be back. I didn’t think there was a team that had enough value to be able to make a trade that would equal Ben Simmons. People kept saying that [Sixers president Daryl] Morey was asking for too much, but they know how good he is despite what he showed in the playoffs last season. So I always thought he would be back. Guys get into their feelings a little bit. Sometimes, especially when you are a 'star' or one of the franchise players on a team, you can be a little sensitive, and anyone who has been in the NBA has seen that before. But Joel [Embiid] and Doc [Rivers] not stepping up and giving him that support that they should have known that he needed — being that they had been around him for so long and should’ve known who he was — that definitely didn’t help things at all. Couple that with the fact that nowadays, with the advent of social media and how much coverage there is when something doesn’t go right or there is friction or anything, and it’s just a completely different basketball world than the one me and you played in.

"But that being said, this could easily be fixed. When you have a Doc Rivers, who is a seasoned veteran coach and Joel Embiid, one of the best players in the league right now... If they can come together and publicly embrace him, what they should’ve done after their playoff loss last year, everything should be okay. And they can get right back to being one of the top teams in the Eastern Conference like they were last season.

"The real hurdle will be the fans, because Philly does not let up and he has to win the fans over, and that is going to be a very tall task for him. If he thought it took a lot of work for his jump shot, wait until he sees how much work it is going to take to win over Philly fans. Because that city, when you have mishaps or you don’t live up to what their expectations are for you, they will give you the blues. Now, they will embrace you if you show them you care, that you are pushing yourself to grow as a player and you are willing to give it your all for the city and the team. You’ll win them back [that way]. But you gotta convince them and show them. It’s a show-and-prove city. So with that, he definitely has a long road ahead of him, but I feel it can be done." 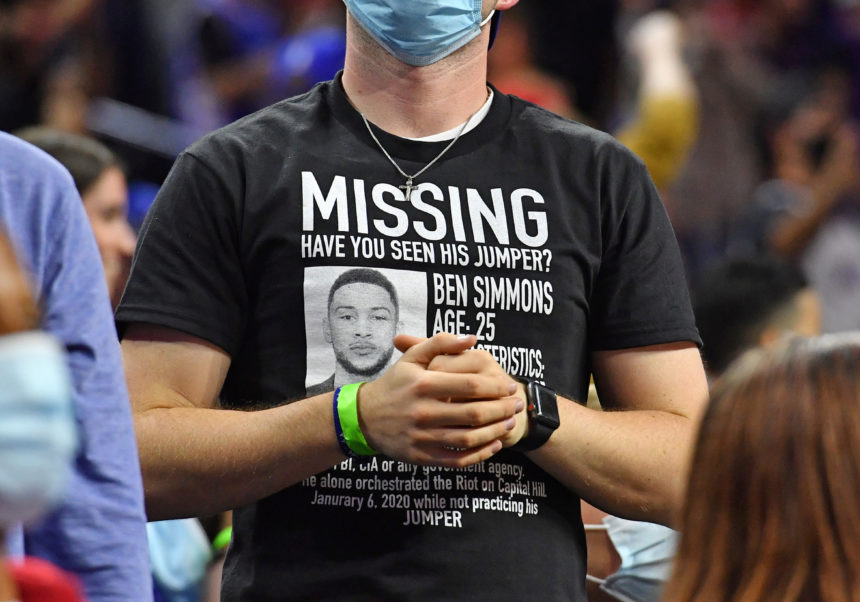 "Ben has to ask himself if his skin is thick enough to play in Philly. I am speaking from experience here. When I first got to Philly, they had run three Carolina guys out of town. So knowing the Philly fans like I do, I know that they are incredibly passionate about their team. And if they feel that Ben Simmons isn’t giving his all, you will be able to feel the disdain and disgust pouring onto the court from all around the arena. And the microscope is, of course, going to be on him now because of everything that has transpired, so they are going to be looking for any glimpse of anything that will add to what they already feel — which is that he gave up on the team. And they took that personal. I guarantee they took it personal. Because their passion leads them to feel like he gave up on them personally. So if Ben’s skin isn’t thick enough to play through that until he has earned back their respect, their trust and their full embrace, then he should go ahead and move on. He is going to have to earn back their love, and prove to them that he is worthy of their love. And if he isn’t prepared to go through that process, don’t even waste your time and just move on.

"I wouldn’t say he has to win over the Philly fans more than he has to win over his teammates, because if I was on his team and he had expressed that he didn’t want to be there and held out and all that, it would take a lot of convincing for me to want to go to war with him too.

"I think he needs to start with a public apology to everyone. It’s gotta be heartfelt. The fans gotta feel it. And when he gets on the court, he has to play to win. There’s gonna be some fans who, when he passes up a shot for an extra pass — even if that was the play or he wasn’t really open at the time — are going to immediately boo. He just has to be mentally strong to not let them affect him, and that’s going to be difficult. But if he is able to push through that period of time and win them over, it may in fact make him a much better player. The Philly fans are some of the greatest fans in the league when you have their support and their appreciation. They’ll go to back for you like no other fans in the league. But he’s going to have to weather this storm first, and if he’s not willing or strong enough to do that, it’s not going to work — period."

"Ben Simmons has a lot of work to do. If they get to the Eastern Conference Finals or NBA Finals, then maybe all will be forgiven, and it’s really that deep because the fans really take it personal. And now, they are going to watch him like a hawk. They may be paying more attention to him than the actual game for awhile. His demeanor when he goes to the bench, when he is interacting with Doc or other teammates. His face when he is pulled out of the game or when he’s sitting on the bench. They are going to be watching literally everything almost waiting for him to give them a reason not to forgive him. I think the boos will probably come initially. It may not be the entire arena, but it may feel like it’s the entire arena because of how passionate the boos are.

"Honestly, I think he’s gonna have a tougher time winning over the fans than he is his teammates. Once he gets back in the locker room and talks to everyone, people will understand. Everyone goes through stuff off the court: family, personal, business, etc. And they don’t have to necessarily love each other to be able to play together. They just have to be on the same page that everyone wants to win, and you can be able to play with people you don’t even really like that much as long as you both want to win.

"Also, they see him every day. So they will get more of an opportunity to see if he’s bought in and can actually talk with him one-on-one, at the locker, in the training room, while they’re just sitting around, on the plane, on the bus. The fans don’t have that level of access, so they have limited opportunities to formulate their opinion of him.

"Now, with the fans, it’s just in their DNA, if there is something that they don’t like, for them to make sure that it’s known. And he’s shown a personality that he doesn’t really take too well to that interaction, so it’s going to be tough. I think his teammates and the organization are going to have to help him reconnect with the fans for sure.

"I think Joel Embiid in particular could help push that process along. I think they need to get together and get on the same page. And then, publicly show the fans that they are in this together and that Joel is on board with Ben Simmons and supports him and wants him as his teammate, and that he is integral to their overall success. But it has to be genuine. It can’t look scripted because the fans will see right through that.

'I think sky’s the limit for them, but they have a lot of work to do. We saw the success they had last season, and then we saw why they came up short — the mental collapses, not shooting the ball at times, little comments here and there — and there can’t be a repeat of that same thing, so some things have to change. And that’s not all on Ben Simmons. That’s on everyone, Doc included, Embiid included, the entire team. So there are a lot of questions still hovering around, and yes, they have a talented team and can put together a lot of wins in the regular season like they did last year. But there is a lot more that is needed in order to be the last team standing."