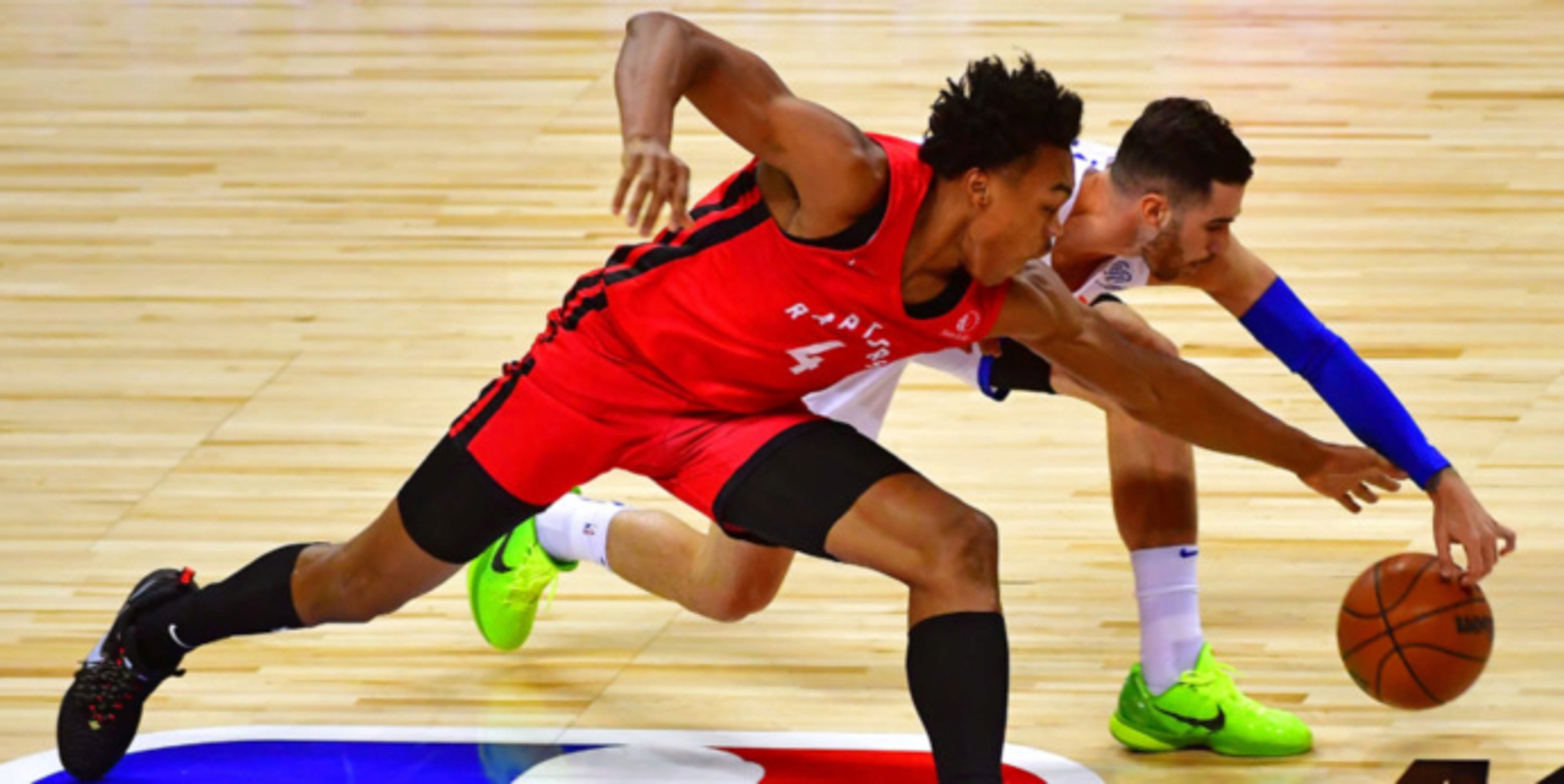 On Sunday, NBA teams descended on Las Vegas for the first time in over two years for the 2021 MGM Resorts Summer League. And viewers got one of the greatest starts to a summer showcase in recent memory.

Almost every NBA prospect showed flashes of talent and long-term potential. Even the "disappointing" players showed glimpses and displayed foundations for growth. It makes breaking down prospects all the more fun.

With any type of summer league analysis comes a bold, italicized warning. This is a small sample of games in a unique environment with limited chemistry and a focused shifted away from winning. We'll be listing the five "studs" and "duds" from Sunday's slate, but by no means should this reflect a stance on a player — it's merely observing their current state as a player in summer league and a prospect in general.

Let's get into it.

Yeah you can't teach this.

Green simply dazzled in his Rockets debut. The first G League Ignite alum to log summer league minutes, Green demonstrated the array of scoring moves that made him this year's second overall draft pick (see above). But he also operated as the lead ball-handler on most possessions for Houston, hitting some of the passing reads he'll need to make in the future. That's a good sign for Green's continued growth as an offensive centerpiece.

Leading the early voting for "guys who have outgrown summer league" is Flynn, who effortlessly carved up the Knicks on Sunday. He cruised to an efficient 23 points, knocking down floaters, pull-ups, step-backs and more in Toronto's 89-79 win. The second-year guard dealt with pressure from the Knicks' defense, but he seemed unbothered.

Another Raptor? It's well-deserved for Barnes, who made quite the impression after surprisingly being chosen by Toronto with the fourth overall draft pick. The do-it-all forward filled up the stat sheet and left his mark on the game with relentless energy. His lone three-pointer looked solid off the catch, and along with some midrange touch, Barnes showed progress on his jump-shot, which was deemed "questionable" by many.

The rookie rarely appeared out of control, even when he dove for loose balls and whipped long passes. Barnes' debut should excite Raptors fans who see his potential as a versatile weapon on both ends.

Johnson showed that he's ready for the NBA by exhibiting the strength and power needed to make an impact in the league. Atlanta's No. 20 overall pick consistently attacked the Celtics off the dribble, finishing through tough contact at times. He wasn't perfect on the defensive end, but the former Duke Blue Devil hustled, as demonstrated by the above highlight block on Carsen Edwards. Without even showing off his passing and vision — arguably his greatest strengths as a forward — Johnson made his mark early.

Antonio Blakeney (27 PTS & 9/10 FG) was DEEP in his bag against the Hornets 🎒 #NBASummer pic.twitter.com/pLq3YFvwIM

He's not a prospect, but Blakeney raised plenty of eyebrows with an electric performance that included 19 fourth-quarter points and 27 total in just over 18 minutes off the bench. The 24-year-old killed the Hornets off the dribble with change-of-pace moves and impressive touch. Blakeney has always been a scorer; he's averaged 26.3 points per game over his G League career. If he can keep things up in summer league, perhaps Blakeney finds another NBA opportunity.

It wasn't all bad for Christopher, who played solid defense and dished a couple of nice passes for the Rockets, but the rookie guard had some serious tunnel vision on Sunday, often driving into crowds and finding himself without an escape route. Christopher's strength is his scoring ability, but he has to work on playing within the flow of the offense and being more methodical against NBA size.

When Josh Giddey went down with an ankle sprain, Mann assumed the lead ball-handler duties with Theo Maledon. But Mann couldn't buy a bucket in the 76-72 win. He created open looks with his handle and burst off the dribble, but missed a number of at-rim attempts and open perimeter shots.

Though Mann had zero assists, he made some smart passes that his teammates missed. He also threw away two quality alley-oop chances. The 18th pick of this year's draft will look to bounce back next game.

Boston's resident sharpshooter was simply ice-cold in the summer opener. Nesmith took plenty of catch-and-shoot threes and just never found a rhythm. This shouldn't cause any type of long-term concern — Nesmith is a proven threat from long range. Slumps happen, and especially in this setting, a cold streak should not raise alarms.

I should be clear that this was far from a terrible game from Cunningham. He was active both on and off the ball defensively, creating transition opportunities that typically ended well. Cunningham's assist numbers were also limited by some poor finishes from teammates.

Still, the No. 1 overall pick delivered an inefficient performance. He cooled off from deep after a strong start and missed a critical (by summer league standards) fourth-quarter three-pointer. In the half-court, Cunningham lacked explosiveness off the dribble. He also logged five turnovers. There's definitely room for improvement here.

In this case, I actually think Bol's final stat line masks what was another frustratingly inconsistent performance. The third-year center had just eight points with eight minutes remaining in the game; overall, it was a tale of two Bols in the 97-77 loss to Miami.

When Bol was engaged — like in the fourth quarter — he threw down putbacks, altered shots and handled the ball in the full-court before using his length to attack the basket. When he wasn't, he disappeared for extended stretches. Eleven of Bol's 21 points came via free throws. At this stage of his career, it's time to start turning the flashes into full games of consistent production.

It's been a while since we've had summer NBA basketball. Fortunately, it's back... And not a moment too soon.