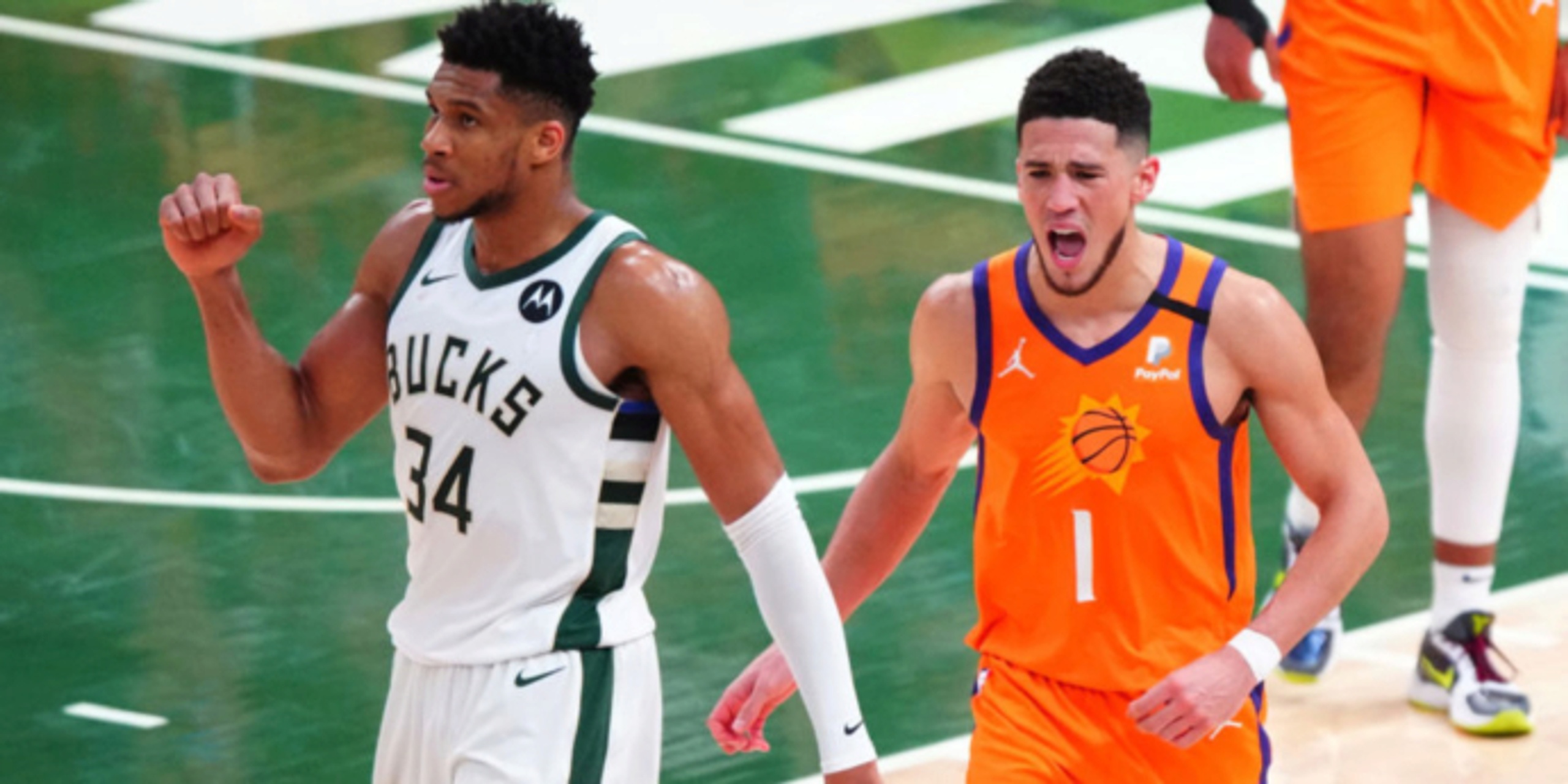 Key questions that will decide who wins the 2021 NBA Finals

It's not a series until the home team loses. That's the old adage, anyway.

Through four games, the home team has come out victorious. The Phoenix Suns looked like a ball-popping, shot-making buzzsaw through the first two games of the NBA Finals. The Milwaukee Bucks responded with full-court pressure and active helpers on defense, and an emphasis on paint bludgeoning on the other end.

Chris Paul, Devin Booker, Giannis Antetokounmpo, and Khris Middleton have all had signature performances in this series. Cam Johnson, Cam Payne, Bobby Portis, and Pat Connaughton have all made timely impacts throughout this series. Both Monty Williams and Mike Budenholzer have presented counters -- and sometimes, counters to those counters -- to what the other is doing.

Clutch your pearls too tightly, focus on the ratings too much, and you may miss out on what is turning into a phenomenal series between pretty evenly matched teams.

Now, here we are: a best-of-seven has turned into a best-of-three.

Here are a few questions that I have that could decide the back end of this series.

1) WHO WILL CONTROL THE TEMPO?

As even as the Suns and Bucks are, they couldn't be further apart in terms of how they want to play.

In short: the Bucks want to push in transition and keep you on your heels, while the Suns want to minimize the possession count and execute you to death.

Game 1 was a Bucks game in terms of pace (101.5), but the series has generally been in the Suns' wheelhouse. The shift, however, is that the Bucks have found a way to bring the game into the mud. Playing slow is one thing; being sluggish and stagnant is another.

The Bucks' decision to implement full-court or 3/4-court pressure has helped take the Suns out of rhythm. It's hard to overstate how good of a job Jrue Holiday has done on Chris Paul, forcing him to work hard to even get the ball across half-court.

When they're able to get across half-court, the Suns have had to deal with more bodies. The Bucks have been more intentional about providing help at the elbows, clogging up driving lanes and forcing a mid-range heavy team into more contested shots.

This has bothered the Suns on two accounts. The added pressure has forced them to work later in the clock than they're comfortable with. During the regular season, 19.8% of the Suns' possessions ended with seven-or-fewer seconds left on the shot clock. In the Finals, that number has risen to 27%.

The pendulum has also swung the other way at times. In an effort to not get bogged down, the Suns have opted to take the first decent look they see, as opposed to working to truly scramble the Bucks in the halfcourt like they did in the first two games. Take this stretch for example:

P.J. Tucker picks up Booker at half-court. As Booker and Deandre Ayton flow into an empty corner pick-and-roll, peep the help from Holiday to ensure Booker isn't able to force Lopez into a pick-your-poison scenario. Holiday's able to get a hand on the ball, force a turnover, and the Bucks get points out of the possession.

Before the next possession even begins, Middleton hangs back to take away an early inbound pass to Paul. Once Paul receives the pass, Holiday is there to pick up Paul before crossing half-court.

Paul is able to shake free a bit before driving into a ton of help, leading to a relief pass to Ayton and an early mid-range jumper. Decent look, but it's hard to call it Suns Basketball.

2) CAN PHOENIX KEEP MILWAUKEE OFF THE GLASS?

Tucker has been a bit of a bellwether in this series. Individual plus-minus isn't the end-all be-all by any means, but Tucker being a minus-19 across the first two games and a plus-9 over the last two seems pretty on-the-nose.

What has become a bigger deal is Tucker's timely rebounding. His motor speaks for itself; he's also in a better spot to create extra possessions because of Phoenix's decision to put Paul on him in an act of conservation.

On one hand, Tucker isn't a dangerous pick-and-roll or pick-and-pop threat, nor is he doing anything off the dribble. The gambit makes sense within that context.

On the other hand, it leads to stuff like this:

Tucker absolutely trucks Paul before coming up with the miss, then firing the kick-out that eventually leads to a trip to the free throw line.

The Suns already have their hands full with Giannis being a monster, Portis mixing it up (six offensive rebounds over the past two games), and Lopez slicing in to box out for his teammates. Tucker's activity is further tilting things in Milwaukee's favor. Dramatically.

To that point: the Bucks have rebounded nearly 31% of their own misses in the series, after posting a 26.9% clip during the regular season.

That's the primary shot Lopez has taken (and missed) in this series.

That number also signifies how many post-up shots Lopez has logged in this series.

The latter is a bit frustrating considering how good of a post player Lopez has been throughout his career. Even with the caveat that the game has changed, and that he has value as a spacer to open up the floor for his more talented teammates, it's odd watching possessions where Lopez floats as a default.

Like, there have been possessions in which Booker has drawn the Lopez assignment and there has been no effort to give Lopez the ball, no effort from Lopez to seal, or both. It's just weird.

Combine that with the fact that Lopez hasn't actually been knocking down shots -- he went 2-of-9 from deep in the Milwaukee games, and is shooting 25% in the series -- and you begin to see why his minutes have started to dwindle.

Add in the Bucks finding goodness with Giannis at the 5, and that the Giannis-Portis frontcourt in particular is generating goodness (plus-25 in 42 minutes together) and you have more ammo to limit Lopez's playing time.

That may not be particularly fair. He's mostly fine at navigating the drop defensively, and has continued to showcase comfort playing closer to the level of the screen when necessary. But "fine" and "comfortable" only mean so much if Giannis is able to not only replicate that, but exceed it.

If Lopez isn't able to find his way offensively -- either knocking down threes at a higher clip, or mixing in more random cuts -- it's hard to argue against his minutes being cut.

4) WHICH VERSION OF DEANDRE AYTON WILL THE SUNS GET?

Ayton has been a godsend to the Suns throughout this entire postseason run. The defense has improved. He's running the floor incredibly hard. He's doing his homework early, sealing off dudes in transition, or punishing smaller players on the offensive glass.

There will be built-in exploits for him whenever the Bucks switch smaller players on him. If they front, high-low opportunities are present if a wing relocates. Ayton doesn't get the bucket here, but the threat of him getting a layup frees Mikal Bridges for this jumper:

But Ayton has to 1) be available and 2) play with a consistent level of force to really bother the Bucks. His foul trouble in Game 3 (further) exposed the lack of depth behind him. In Game 4, there were too many possessions in which he didn't lean into his physical advantages. Like, what exactly is this?

The Suns are going to need Ayton to be a consistent part of the offense. His screening matters. The offensive rebounding matters. As mentioned in the series preview, Ayton's ability to abuse smaller players after switches will absolutely matter.