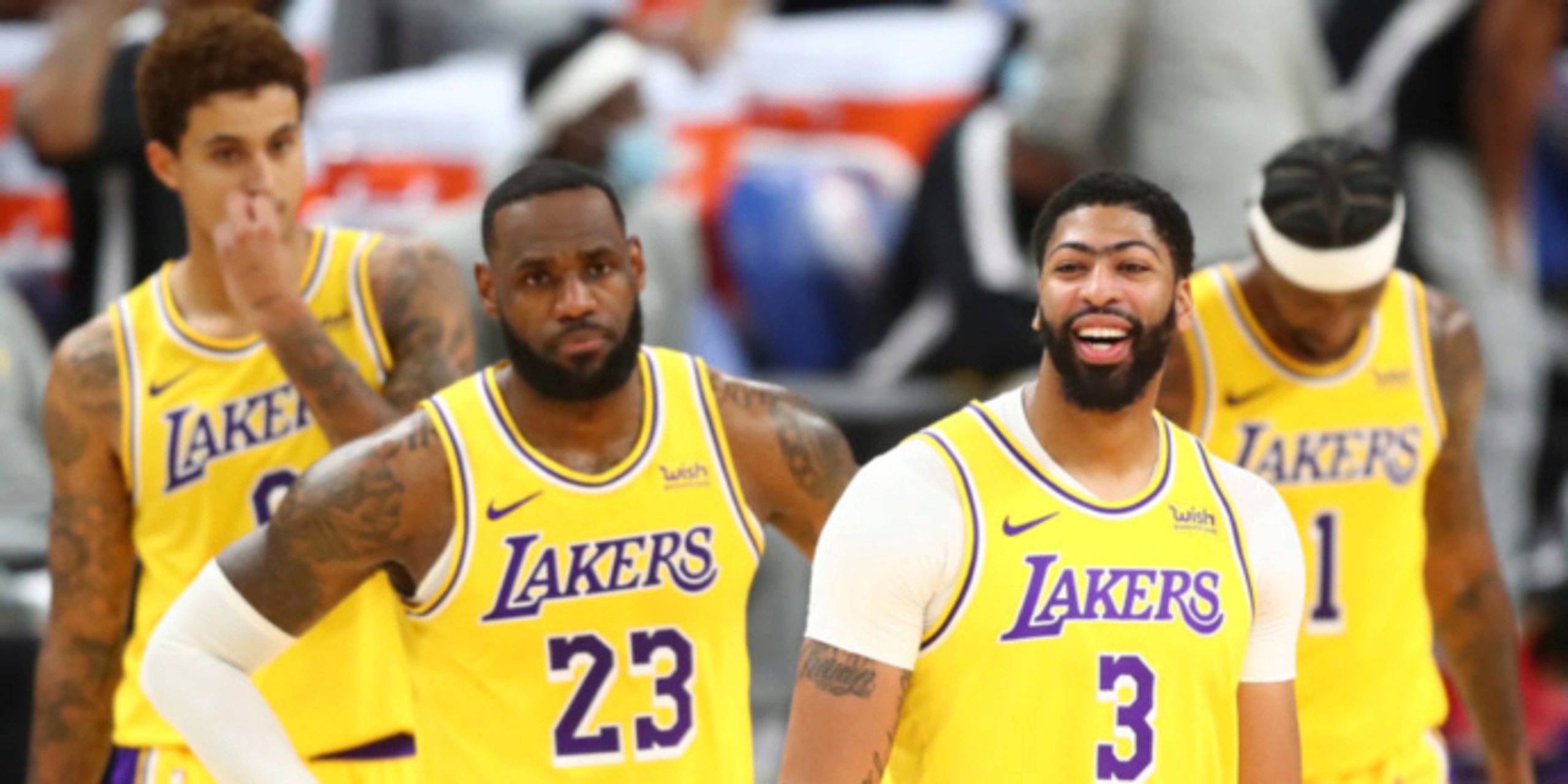 Without many assets, the Lakers face a somewhat challenging offseason

The Los Angeles Lakers are coming off a disappointing first-round exit after winning the NBA championship in 2020. Injuries derailed the defending champions, who now enter the 2021 offseason with little cap flexibility and some big decisions to make on key players who are up for new contracts.

LeBron James and Anthony Davis combined will take up roughly $76.5 million of the Lakers’ salary cap space. The overall total with current contracts on the books (including player options, qualifying offers, and non-guaranteed salary) could be as high as roughly $127 million next season. Along with LeBron and Davis, Kentavious Caldwell-Pope, Kyle Kuzma and Marc Gasol are set to be wearing purple and gold next season.

Some key players who are free agents include: Dennis Schroder, Andre Drummond, Alex Caruso, Markieff Morris, Wesley Matthews, Ben McLemore and Talen Horton-Tucker (who will likely pass on the Lakers’ qualifying offer and become a restricted free agent). Also, Montrezl Harrell has a $9.7 million player option for next season.

While the Lakers can never be counted out as candidates to trade for a superstar, the likelihood is that  L.A. will not be able to swing a deal for someone like Damian Lillard this offseason. The Lakers do not have a core of young players to throw in a trade or a stash of draft picks to barter with. With little cap flexibility, the simplest path towards filling out the roster this offseason is through re-signing the free agents from last season’s squad. While that will not make for the most exciting offseason in Lakers’ history, it would ensure the Lakers have a baseline of talent to put around LeBron and Davis.

Perhaps the most important player for the Lakers to focus on at the beginning of free agency is Schroder. Schroder reportedly turned down a four-year, $84 million extension during the season, which indicates that he believed he could get even more from the Lakers in the offseason -- when they could offer him significantly more money.

The Lakers are in a tough spot with Schroder. The 27-year-old is reportedly looking to sign a new deal with the Lakers in the $100-$120 million range. While that may seem like an absurdly high number for Schroder, the fact is that the Lakers are the only team able to pay him this much money because he has Bird Rights. The Lakers cannot pass on Schroder and try to pay another free agent with that kind of money since that player would not have Bird Rights, leaving L.A. with little cap flexibility. This gives Schroder tremendous leverage in these negotiations. With LeBron nearing the end of his career and Davis on the roster, the Lakers need to maximize their roster and compete for a championship this upcoming season, which means Schroder may in fact get his massive payday. 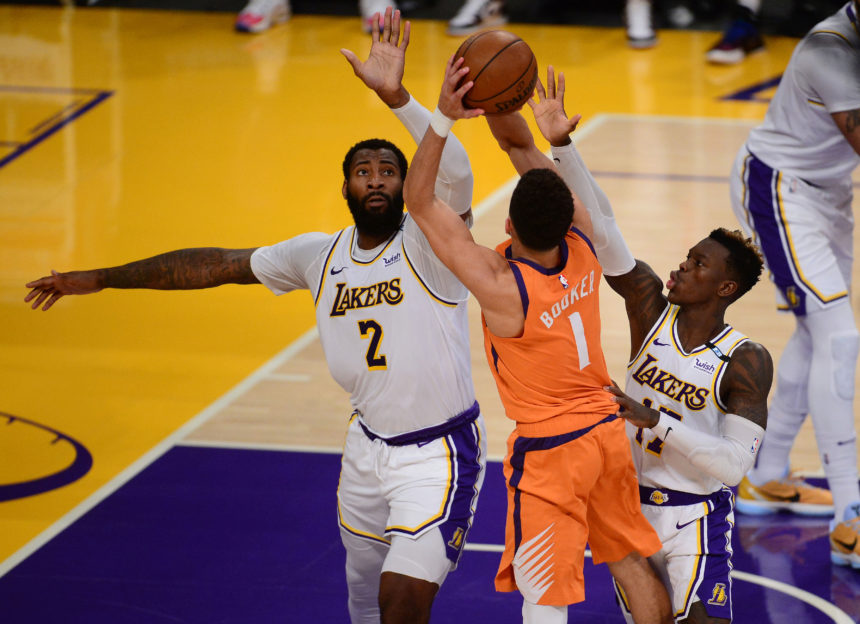 Another tough question for the Lakers is what to do with Drummond. Drummond averaged 11.9 points, 10.2 rebounds, 1.1 assists and 1 block in 24.8 minutes per game with the team last season (21 total games). It is difficult to say whether Drummond would be a good fit alongside a healthy LeBron and AD since the three did not play in a lot of games together this season. Drummond is still relatively young (he is turning 28 in less than a month) and can produce big box score numbers. He is certainly worth bringing back for another season, but at what price?

The Lakers can only offer him 120 percent of his salary from this season, or they could offer him more money using their mid-level exception. However, considering that Drummond will be looking for more money in free agency than the Lakers can offer and that he didn’t seem to fit particularly well on the roster, it is possible that Drummond will not be returning to Los Angeles next season.

The next big question for the Lakers is what will happen with Horton-Tucker. Horton-Tucker is only 20 years old (he turns 21 later this year), and has already developed into a quality player with a good amount of upside. The young wing will certainly pass on the Lakers’ qualifying offer to become a restricted free agent.

Horton-Tucker’s situation is somewhat unique, as he only has two years of NBA experience under his belt, meaning the Lakers will have Early Bird Rights instead of full Bird Rights. This is important because it means that another team can offer Horton-Tucker a poison-pill type of contract that would boost his salary significantly in the third and fourth years of that deal; the Lakers would have a difficult decision to make on whether to match this type of offer sheet. Notably, the third year of that possible deal would fall in the 2023-24 season, which is when LeBron’s current contract expires. It is unclear whether the Lakers want to invest a big portion of their future cap space in Horton-Tucker two years from now when James may no longer be wearing a Lakers jersey and the team may be looking to transition.

The next free agent priority for the Lakers is Caruso, a fan favorite who has developed into a quality backup guard and a particularly stingy defensive player. The Lakers want to bring Caruso back on a new deal, but Caruso has performed well enough that other teams are going to at least consider offering him a contract large enough to lure him away from Los Angeles. However, Caruso has expressed his desire to return to the Lakers, who have Bird Rights on Caruso and can offer him a significant raise over the $2.75 million he made last season.

If the Lakers manage to bring Caruso back on a new deal, it’s possible they will look to expand his role and give him more playing time. With Caruso on a relatively small salary over the last few seasons, it was not critical for Caruso to produce big numbers with heavy minutes. But with a bloated cap sheet and a bigger salary, the Lakers may look to get more production out of Caruso if he signs a new contract with the team this offseason.

In terms of the Lakers’ remaining key players, things become a lot simpler.

Harrell has a $9.7 million player option for next season, which means he gets to decide whether he returns to Los Angeles next season or not. Harrell was a solid contributor throughout the regular season, but his defensive limitations were once again exposed in the playoffs. This led to Frank Vogel benching Harrell in Game 2 and Game 3 in the first round against the Phoenix Suns. This may have dropped his value in free agency, enough that he will consider exercising the option and testing free agency next year. However, it would not be shocking for Harrell to test free agency again this offseason, betting on the idea that another team will ignore his playoff struggles over the last two seasons.

Harrell is still only 27 years old, so he should have a few more seasons in his athletic peak, but the back end of a long-term contract could be problematic down the road.

Morris is a solid forward who can spread the floor and help the Lakers, especially in small-ball lineups. Morris can be streaky in terms of his overall production, but if he is willing to come back on a relatively small deal, the Lakers will not hesitate to re-sign him.

Matthews provided the Lakers with some solid production on both ends of the court. The veteran guard is known for his defensive prowess and three-point shooting. However, Matthews is now 34 years old; we can't forget his injury history, as he suffered an Achilles tear in 2015. It is reasonable to believe that Matthews can provide more defense and three-point shooting next season, but there is always the risk that his production could plummet as he gets deeper into his NBA career.

Despite those factors, the Lakers would likely bring back Matthews back on an affordable contract if another team does not lure him away.

The Lakers could also bring back Ben McLemore on a small deal, but it’s not clear how big of a priority he is for them this offseason. McLemore is 28 years old, still has plenty of athleticism and can score in bunches. McLemore has never rounded his game out, and it’s unlikely that he'll have a breakout season, but he is a decent option to have at the end of a rotation. 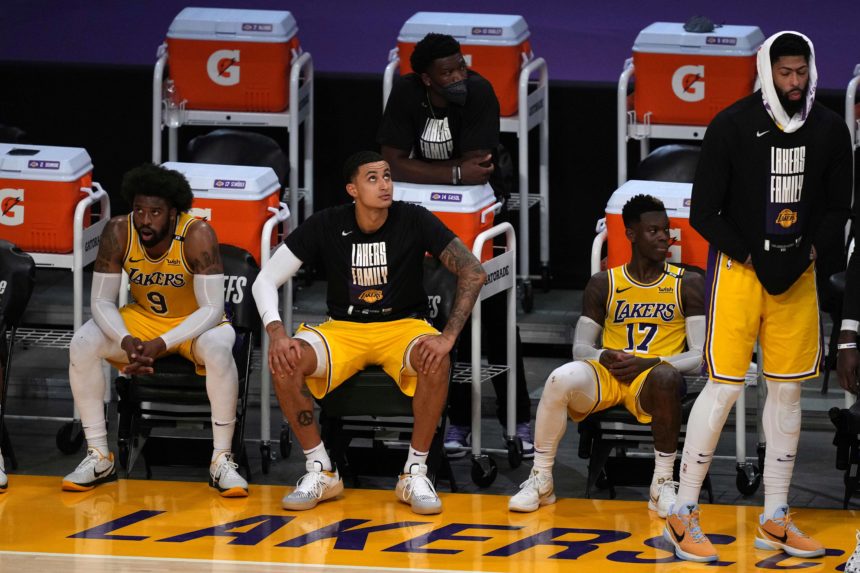 Outside of their own free agents, the Lakers will certainly look beyond last season's roster to bolster theirs for the 2021-22 campaign. The Lakers can try to make some big trades that could bring back a notable player or two by trading someone like Kuzma. While Kuzma has improved on both ends of the court over the last few seasons, it’s no secret that his role has been unclear at various times, which he believes has negatively impacted his production. The Lakers could also engage in a sign-and-trade with one of their own free agents, but that will trigger the hard cap and would limit the team’s flexibility, so don’t expect that to happen unless a deal for a major player emerges.

The Lakers need to add more shooting around LeBron and Davis, so it’s possible they will target someone who can spread the court with their mid-level exception.

Someone like Jeff Green could make sense for Los Angeles. Green is now 34 years old, but he shot well for the Brooklyn Nets last season (41.2% from beyond the arc), and can play as a small-ball center and defend relatively well.

The Lakers have also been linked to Spencer Dinwiddie, who has reportedly expressed his interest in signing with the purple and gold. However, Dinwiddie will certainly wait to see what kind of offers materialize before considering playing for the Lakers on a massive discount.

Also, someone like Reggie Bullock, who played for the Lakers briefly a few years ago, could add valuable shooting from the wing on an affordable deal.

The Lakers face a somewhat challenging offseason. The franchise always looks to get involved in deals for star players, but without a war chest of tradeable young players and draft picks, it is more likely the Lakers will have to focus on bringing back their own players and rounding out the roster with a few free agents that can be had on bargain contracts.