Explain one play: The Bucks and the power of three

If this has felt like a weird season for the Milwaukee Bucks, it's because it has been.

Giannis Antetokounmpo, Jrue Holiday, and Khris Middleton have all missed at least 10 games this season. Brook Lopez has missed all but eight games.

The defense has been flipped on its head, in large part due to Lopez's extended absence after the season opener. They went from a drop-heavy system to one of aggression; it looked good ... until it didn't.

Injuries, COVID absences, rotation and personnel changes (hi Serge Ibaka), general malaise. That isn't unique to the Bucks, but you'd like to have a firmer handle on a team that just won a title.

Tuesday night's showing against the Philadelphia 76ers served as a nice reminder to the masses: They are monsters when healthy, and can ramp things up on both ends of the floor.

Good things happen when the Giannis-Jrue-Middleton triumvirate is on the floor together. The Bucks have a 33-9 record in games they play together. Per Cleaning The Glass, Milwaukee is outscoring opponents by nearly 12 points per 100 possessions with them on the floor.

Further, the Bucks are at their most dangerous when all three players are used together. That Net Rating is high because their offense (121.0 Offensive Rating) is absolutely absurd. Their skill sets also contrast enough to force defenses into uncomfortable positions when teaming up in set plays.

Take this doozy that the Bucks ran late in the fourth quarter of Tuesday night's affair.

The Bucks set up in HORNS, one of the most common offensive alignments in the league. If you see a player at each elbow and a player slotted in each corner, that's what it is.

What I love about this is the Bucks take a routine look and flip it on its head. The Bucks love running Middleton off a Giannis screen to set up a high ball-screen with a spread floor. It'd look something like this. 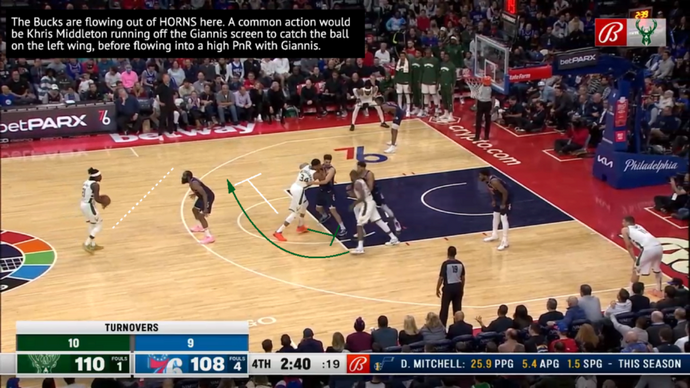 But instead, Middleton sets a screen for Holiday, which throws the Sixers off.

The Sixers are planning to switch anything involving these three players, but the positioning of Middleton and Giannis make things tough. Tobias Harris isn't in position to cleaning switch onto Holiday after the impromptu screen; Georges Niang can't really leap out to take him because he has the Giannis assignment, and you don't want him rolling into open space. 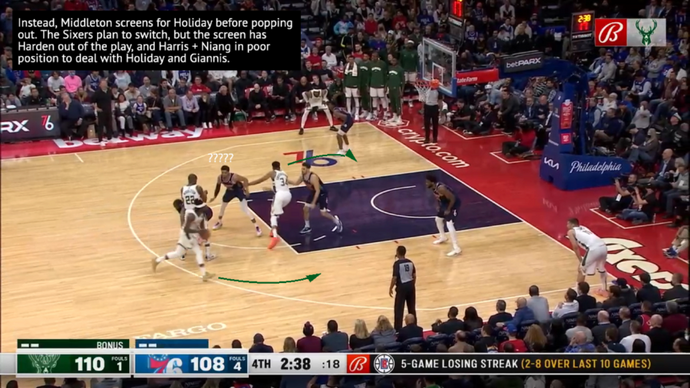 And that's what makes this play genius from the Bucks. They know the Sixers plan to switch, so they set up their spacing in a way to make that exchange difficult.

The Giannis portion is especially fascinating. As the saying goes, the best way to beat a switch is with a slip; sure enough, Giannis slips that sucker as Harris and Niang try to figure out the Holiday assignment on the fly.

Giannis doesn't just slip; he slips to the side with a single shooter. Wes Matthews is stashed in the corner, defended by Tyrese Maxey. Because they're on the weak side, Maxey is the "low man" on this play. His responsibility is to tag Giannis on the role.

That poses two problems, though:

1) Maxey also has to account for Matthews, a career 41.6% shooter from the corners.

2) Maxey is at a significant size disadvantage even if he does fully commit to Giannis. 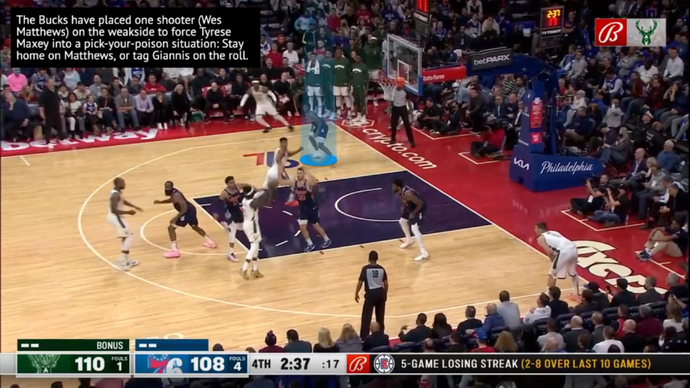 Unfortunately for the Sixers, Maxey doesn't choose Door No. 1 or Door No. 2; instead, he gets caught in no man's land. Giannis gets an uncontested lob as a result.

In a shocking turn of events, the Bucks went to the same action roughly a minute later. If you're nice, you'll do it twice.

Niang and Harris switch this time, but the same issue pops up. Nobody can get to Holiday in time while also trying to account for Giannis slipping to the rim. Joel Embiid tries to cheat down from the strong side (generally a no-no) this time, but it doesn't matter.