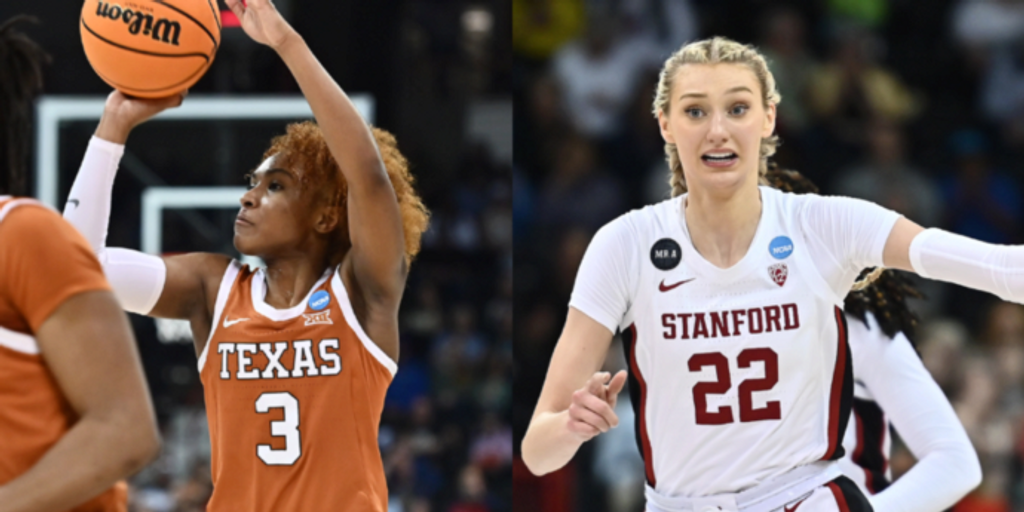 In a domineering defensive showcase in the Elite Eight against the No. 2 seed Texas Longhorns, Stanford is on its way back to the Final Four, seeking to re-up its status as the NCAA national champion.

Cardinal junior forward Haley Jones put on an impressive showing, triggering Stanford's Princeton sets from the high post and slicing up Texas' defense with pocket passes and face-up drives if those actions were shut down. A likely top pick in the lottery in next year's WNBA Draft, she has the craft, fluidity and scoring chops as a point forward that just aren't easy to find.

Texas had no answer for Jones, sending her to the line 11 times. Overplay her, and she's going to make the right pass. Put a big on her, and Jones will take it to the rim and use an array of post moves and her quickness at her size to create an advantage.

Senior guards Joanne Allen-Taylor (Texas) and Lexie Hull (Stanford), both projected 2022 WNBA Draft picks, punctuated play with their shooting prowess in and outside the arc.

Yet, the play of two young stars on their respective teams stood out.

Longhorns freshman guard Rori Harmon, the Big 12 Freshman of the Year, had a rough game from the field going 6 of 18, but the flashes of her brilliance lend credence to an extremely bright future.

Harmon is an artist, and her preferred medium is paint touches.

Harmon's shake is violent and explosive, but also controlled and reigned in just enough to make creative chaos lethal to a defense. She unleashes some slithery finishes and tight-space craft, allowing her to use her quickness and smaller size to her benefit against bigger defenders.

Lack of size can be a real detriment for paint attacks, but Harmon showcases some impressive ability to finish through contact.

Continued development of her pull-up jumper will be key, as Stanford routinely went under on ball-screens employed for Harmon; her guile and pace are so exquisite that it doesn't matter at times. There are few things in prospects more revered than the ability to routinely break down a defense, and Harmon has the sauce.

Her defense at the point of attack can be menacing (Harmon was all over Wilson on both ends), as Harmon possesses elite lateral quickness and stout physicality as the tip of the spear.

With three more years of development and experience left before she's eligible for the draft, she's gonna be a problem.

Stanford sophomore center Cameron Brink stole the show, however. After a first half punctuated by foul trouble (a theme for her this year, but she's made real progress), she put together a flat-out dominant defensive second half with some intriguing offensive flashes smattered in.

She walled off post-ups and flexed her length and verticality to neutralize Texas' bigs.

Her ability to lock-in, slide her feet, maintain her balance with the functional strength to not get backed into the rim and display the timing to swat away or stifle an attempt is absurdly impressive.

Brink finished with 6 blocks (including this devastating block on Harmon) and a steal, but her ability to obliterate possessions extends outside the box score.

It's just one possession, but it encapsulates so much of what makes Brink a tremendous defensive prospect. She has the length and size of a true 5 with the rim-protection to back it up, but she also has mobility and coordination that few possess at 6-foot-4, lending credence to the idea that she has some real viability at the 4 as well.

I mean, just look at this late switch onto Harmon.

Could Brink staple a speedy guard to the top of the arc for an entire possession? Probably not, but the wrinkle to smother a late shot-clock possession like this on a switch is absurd! Against most bigs, that's a quick J from Harmon as soon as she comes off the screen, but Brink's positioning and angling are just awesome here.

Thinking about Brink having the chance to roam off-ball at the next level alongside another post player and blowing up offensive actions is enamoring. She won Pac-12 Defensive Player of the Year, and it's easy to see why she'll be up for both awards again as a junior.

Yet, you can't really play the 4 without showing the skill to do it on the other end right?

Brink has taken 30 three-pointers this season (including March Madness), with 24 coming after February, including four against Texas — a huge development.

The make was great; suave smooth, quick release, no hesitation. But, the misses also stand out!

A jab-step take off a head fake?!

Again yes, it's a miss, but the comfort and smoothness is impeccable. This is a good shot, and I want to see more volume.

The next shot, please have your volume UP, because I am dying. This is definitely a heat check, but it's an earned heat check! Again, the smoothness on this stepback really stands out. Will it ever be a massive part of her game to take self-created threes at the next level? I'm unsure, but the fluidity and confidence is so, so huge in projecting her as a viable shooter on volume and with variety.

Brink has a really good feel for the game and a pretty quality handle for her size. If that shot comes along, I envision even more of this opening up, which is just.... man.

The shooting matters because of what it can unlock and how it can dictate a defense will defender Brink. Hitting shots? Great. Making the defense care that you're taking them? All the more important.

This dump-off is awesome. If you're driving baseline and the lane isn't really there and there isn't an angle, get your defender going backwards with their momentum, spin back and find the cutter. What's so impressive is that this isn't premeditated; it's a great cut by Fran Belibi to open an outlet, and Brink sees this ASAP, making an incredibly quick scan and read while spinning (?!). And don't get me started on the wrist flick to perfectly deliver that pass.

Brink is such a special prospect and player. And while we've got a great deal of time before we need to talk about Harmon and Brink's draft status, they deserve shine for some incredible performances and flashes enveloping their quality seasons.

Be sure to catch the next set of games, as the Final Four kicks off on Friday at 7 p.m. EST with South Carolina vs. Louisville. Later on, UCONN and Stanford will meet at 9:30 p.m. EST.