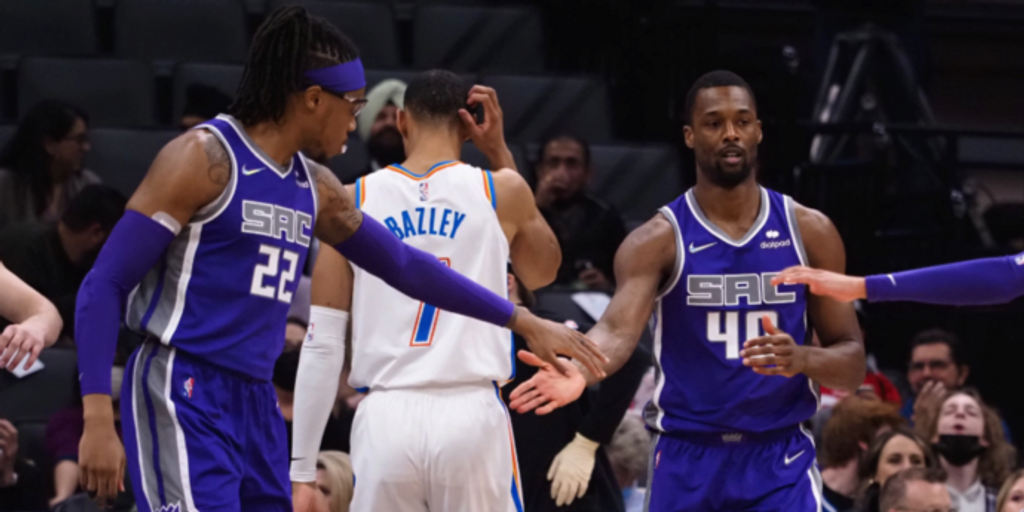 Breaking down 6 hypothetical trades for the Kings' No. 4 draft pick

That was the last time the Sacramento Kings played in a playoff game. That contest took place 5,863 days ago.

To put that into context: During that 2005-06 season, Chris Paul was a rookie and Bruce Bowen, who was born in 1971, was named to the NBA's All-Defensive First Team. Steve Nash won his second consecutive MVP award and Boris Diaw was named the league's Most Improved Player.

The Kings made history last month, the type of history that no organization wants to be known for. Sacramento, who finished the 2021-22 campaign with a 30-52 record, failed to qualify for the postseason for the 16th straight season, breaking the NBA record for the longest playoff drought. (The Kings had been tied with the Buffalo Braves and Los Angeles Clippers prior.)

So, while many teams in this year's draft lottery are rumored to be interested in potentially trading their pick, arguably no team is more motivated to add an established player (as opposed to an unproven rookie) in hopes of avoiding a return trip to the all-too-familiar lottery dais next May than the Kings.

As proof of their urgency to win now, the Kings shocked pundits back in February by trading away Tyrese Haliburton, one of the league's most promising young point guards, to the Indiana Pacers in exchange for a package that included Justin Holiday, Jeremy Lamb and two-time All-Star Domantas Sabonis.

Thus, it isn't shocking to learn that Sacramento, who jumped up to land the No. 4 overall pick in last week's lottery, is reportedly willing to wheel and deal if presented with the right offer.

According to Jake Fischer of Bleacher Report, "there's a strong belief among rival teams that Sacramento will explore trading the fourth selection, either out of the draft entirely for an impact veteran or down later in the lottery to net a contributing rotation player in the process."

The other issue likely factoring into the Kings' thought process is that the top tier of the 2022 NBA Draft consists of three players (Jabari Smith, Chet Holmgren and Paolo Banchero), with a bit of a dropoff after those elite prospects. Nonetheless, "the uncertainty of the fourth selection could prompt eager teams to leap up to secure their prized prospect" which puts the Kings' front office in a "strong trade position," per Fischer.

Additionally, Mike Scotto of HoopsHype recently reported that NBA executives "are monitoring the Sacramento Kings" as a team that could trade their pick "in search of player(s) that can help immediately." Scotto added that after acquiring Sabonis, the Kings have "made it clear the goal is to end the franchise's playoff drought" and that "rival teams are keeping an eye on Sacramento to trade this pick."

So, let's examine some deals that might make sense for both the Kings and a potential trading partner.

Detroit Pistons send Jerami Grant, Saben Lee, Isaiah Livers and a second-round pick (No. 46 overall) to the Kings in exchange for the No. 4 overall pick, Richaun Holmes, Maurice Harkless and Alex Len

Earlier this offseason, Sacramento general manager Monte McNair conceded that the team needs to add players who can knock down shots and fit in alongside the franchise's cornerstones, Sabonis and De'Aaron Fox.

"I think shooting, we can clearly acknowledge, will be a huge priority," McNair declared. "Length, athleticism, versatility — we've talked about all that as well. Obviously, you want the whole package, but shooting will be a big priority for us."

Grant most certainly checks those boxes. During his two years in Detroit, he has averaged 20.9 points, 4.4 rebounds, 2.6 assists, 2.0 made treys and 1.1 blocks per game. He has shot over 37% from downtown on 4.5 attempts over the past four seasons and is a versatile, plus defender. As a stretch-4, Grant — who just turned 28 and is in the heart of his prime — could conceivably fit in well in the frontcourt alongside Sabonis, who likes to operate on the low block and is a good passer from the post. Moreover, Fox-Grant pick-and-rolls would be difficult to defend.

The issue in this potential trade is that Grant has just one season left on the three-year, $60 million deal he signed in 2020. However, as long as Grant is traded before Aug. 9, he is eligible to sign an extension with his new team for up to $112 million over four years. After previously spurning the Nuggets to sign with the Pistons, we know that Grant is not afraid to join a team that hasn't enjoyed recent success. Would he be willing to commit to Sacramento long-term? If so, a Big Three of Fox, Grant and Sabonis might be talented enough to finally push the Kings into the postseason.

For the Pistons, they would add Holmes (a quality center on a team-friendly contract) and enter next month's draft with 2 of the top 5 picks, which would allow them to add a pair of promising prospects to a core centered around Cade Cunningham, Saddiq Bey, Isaiah Stewart and Killian Hayes.

Washington Wizards send Kyle Kuzma and the No. 10 overall pick to the Kings for the No. 4 pick, Justin Holiday and Terence Davis

After a disappointing end to his tenure as a Los Angeles Laker, Kuzma bounced back with a very productive season for the Wizards in 2021-22. He averaged 17.1 points and 1.9 made three-pointers while setting career-highs in rebounds (8.5), assists (3.5) and blocks (0.9) per game. He led the Wiz in double-doubles with 24 (which ranked tied for the sixth-most among all forwards in the NBA). Adding Kuzma's offensive versatility would provide Sacramento with some much-needed depth at forward. In addition, the Kings would still have a lottery pick, dropping back just six spots, which would allow them to add another young asset to the roster.

The Wizards would likely entertain such a deal if they fell in love with a prospect — such as Keegan Murray, Jaden Ivey or Shaedon Sharpe — whom they feel relatively sure won't still be on the board at 10.

Kuz has two years left on his current contract but can opt out in the summer of 2023. However, he will be eligible to sign a four-year extension for up to $70 million this October if his $13 million player option for 2023-24 is declined.

A similar package featuring one of the Wizards' other young forwards (Rui Hachimura, Deni Avdija or Corey Kispert) instead of Kuzma might also be feasible, depending on the value the Kings/Wizards place on the respective players.

Houston Rockets send the No. 3 overall pick and Eric Gordon to the Kings for the No. 4 pick, a (protected) future first-round pick, a 2022 second-round pick, Richaun Holmes and Justin Holiday

Is it possible that Sacramento views Smith, Holmgren or Banchero as talented enough to make a substantial impact as a rookie? If so, would the team be willing to pony up sufficient capital to move up one spot?

The Kings would snag one of this draft's three most prized prospects in this hypothetical scenario. The 7-foot Holmgren is one of the most versatile prospects to enter the draft in recent history. Banchero possesses a freakish combination of size, strength and athleticism. Smith projects as a lethal stretch-4 who could fit in nicely alongside Sabonis.

Gordon is a respected, established veteran with just one year of guaranteed money left on his contract. He shot a scorching 41.2% from three-point territory this past season, the second-best mark of his career.

Such a deal would make sense for the Rockets if they feel whichever of the top-tier prospects that falls to them isn't significantly better than the next highest-ranked player on their board. During a post-lottery press conference last week, Rockets general manager Rafael Stone said Houston is open to trading the No. 3 pick.

Adding a quality young center in Holmes would give the Rockets leverage in negotiations with Christian Wood, or potentially enable them to trade him out of Houston.

New York Knicks trade Julius Randle and the No. 11 overall pick to the Kings for Harrison Barnes, the No. 4 pick and a second-round pick (No. 37 overall)

Randle playing alongside Sabonis could be viewed as a clunky fit, but Sabonis did play 80% of his minutes at center for Sacramento after arriving via the midseason trade. The pairing would undoubtedly be problematic defensively, but the duo would be dynamic on the offensive end. Over the past two seasons, Randle and Sabonis were 2 of only 4 NBA players to average double-digit boards and more than 5 assists per contest. (The other two players in this club were Nikola Jokić and Giannis Antetokounmpo.)

After being named to the All-NBA Second Team in 2020-21, Randle's offensive inefficiency regressed dramatically this past season. In addition, the relationship between Randle and Knicks fans turned toxic at various points during the year. Yet, even in a "down year," he averaged 20.1 points, 9.9 boards and 5.1 dimes per game. A fresh start in California might help Randle regain his All-Star form. Also, he is under team control for at least three more years (he has a player option for 2025-26), which means the Kings wouldn't have to worry about their key players entering free agency anytime soon.

From the Knicks' perspective, this move would allow them to jump up and snag a highly-touted prospect, possibly combo guard Jaden Ivey, who New York was rumored to be interested in. And, as I wrote last month, moving Randle would enable the Knicks to insert Obi Toppin (who averaged 27.2 points, 6.2 rebounds and 3.8 made three-pointers per game in April) into the starting lineup while also clearing Randle's contract off their books. Barnes will celebrate his 30th birthday next week, but is still playing at a high level and has just one year left on his current deal.

After signing a massive five-year contract worth $125 million last summer, Collins struggled with injuries and inconsistency in 2021-22. His disappointing production was one of the reasons Atlanta failed to meet lofty expectations this season. One year after advancing to the Eastern Conference Finals, the Hawks spent much of this past season below .500 and were easily eliminated by the Miami Heat in the first round.

Would they be willing to part way with Collins (and his contract) to jump 12 spots in the draft?

Much like the aforementioned Randle/Knicks deal, the Kings would have to decide if Collins could mesh with Sabonis and Fox.

Charlotte Hornets trade Gordon Hayward, the No. 13 pick and the No. 15 pick (via NOLA) to the Kings in exchange for Harrison Barnes, Maurice Harkless, Alex Len and the No. 4 pick

Attempting to determine Hayward's value league-wide is difficult. When healthy, he's been remarkably productive throughout his career. However, he's been plagued by injury issues and has missed 58 games since signing a four-year, $120 million pact with the Hornets in 2020. He has two years and $61.5 million left on his current contract, which also contains a 15% trade kicker.