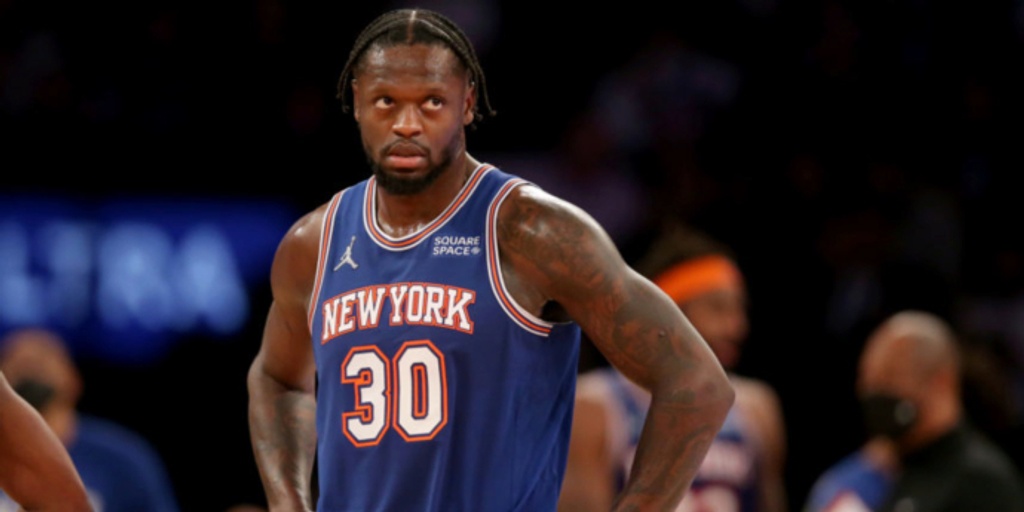 Julius Randle and the Knicks should part ways this summer

It's not uncommon for high-profile athletes in New York to experience ups and downs throughout their careers. Yet, in just the three seasons Julius Randle has spent as a Knick, he's endured nearly unprecedented swings, from extreme lows to intense highs and everything in-between...

After making the difficult decision to trade away Kristaps Porzingis in February 2019, the Knicks inked Randle to a three-year, $63 million deal the following summer, hoping Randle could carry the team offensively and help them return to respectability.

However, Randle struggled to handle the bright lights of Broadway during his first year in NYC. After averaging over 21 points per game on 52.4% shooting during his sole season in New Orleans, Randle's scoring average dipped to 19.5 points per game on 46.0% shooting in 2019-20. And while his overall counting stats were solid (19/10/3), his inefficiency and defensive lapses contributed to the Knicks' putrid 21-45 record.

In an article he penned for the Players Tribune, Randle acknowledged that he wasn't quite prepared for the pressures that came along with being the top dog in the Big Apple.

"To be honest, I don't think I realized everything that goes into being a No. 1 option in the NBA," Randle explained. "Another problem, looking back, is that I think I was so focused on proving myself as a No. 1 option, that I lost sight of some of my other responsibilities to the team."

Randle added: "I know you only get one chance to make a first impression in a city — and I was so disappointed in myself for how that first season in New York had gone."

Well, his second impression was incredible.

Randle wasn't just good during his second season in NYC; he authored one of the finest all-around seasons in Knicks franchise history.

The winner of the NBA's Most Improved Player, Randle finished the 2020-21 campaign averaging 24.1 points, 10.2 rebounds, and 6.0 assists per game, ranking in the top-20 in all three statistical categories. Prior that that, the only other players in NBA history to average at least 24 points, 10 rebounds and 6 assists over an entire season were Wilt Chamberlain, Nikola JokiÄ‡, Larry Bird, Russell Westbrook and Oscar Robertson.

Randle also averaged 2.3 made three-pointers and 0.9 steals while shooting 45.6% from the floor, 41.1% from downtown and 81.1% from the free-throw line. According to Basketball-Reference, Randle was just the second player ever to average more than 10 rebounds and 5 assists while shooting over 40% from three-point territory and over 80% from the charity stripe. (The only other player in this exclusive club is Bird, who posted those numbers in 1984-85 en route to winning the Most Valuable Player award.)

Knicks fans inside MSG would serenade Randle with boisterous "MVP" chants nearly every time he stepped to the free-throw line over the last two months of the season.

Randle would finish eighth in MVP voting and be named to the All-NBA Second Team alongside Chris Paul, Damian Lillard, Joel Embiid and LeBron James.

Last summer, fresh off his career year, the Knicks inked Randle to a four-year contract extension worth up to $117 million.

Consequently, expectations were sky-high for Randle and his Knicks entering the 2021-22 campaign...

As we know, New York instead finished the year with a disappointing 37-45 record, failing to qualify for the playoffs for the ninth time in the last 10 years.

While Randle's counting stats were once again solid, his offensive inefficiency and porous defense were crippling. After shooting 41.5% on mid-range jumpers in 2020-21, he converted just 33.3% of his mid-rangers this past season. Of the 66 players who attempted more than 500 jump shots this past season, Randle was the least efficient. Every other player in the league who attempted more than three such shots per game converted over 35% — except for Randle.

Randle also struggled from long distance. After shooting over 41% from behind the three-point arc in 2020-21, that percentage tumbled all the way down to below 31% in 2021-22.

To put Randle's inefficiency in context, consider this: In 2021-22, Randle became the first and only player in NBA history to attempt more than 300 three-pointers and 300 free throws, yet shot below 42% from the floor, below 31% from downtown and below 76% from the charity stripe.

Oh, and his assist average decreased (from 6.0 to 5.1) while committing a career-high 245 turnovers.

Yet, if only his subpar production were an issue, the Knicks front office — led by team president Leon Rose — might be far more comfortable bringing Randle back in 2022-23 and hoping he can rebound from a rough year.

However, there are a number of concerns that complicate the situation.

The relationship between the burly power forward and Knicks fans turned toxic at various points over the past six months. During a home game against the Boston Celtics in early January, some New York fans inside Madison Square Garden booed Randle and his teammates after the Knicks fell behind by 25 points. Randle aimed a thumbs-down gesture at the crowd at one point in the fourth quarter. He acknowledged the gesture was directed at the fans after the game (which included a miraculous Knicks comeback, capped by RJ Barrett sinking a miraculous buzzer-beater).

When asked by reporters what it was for, Randle replied: "To shut the f–k up."

Unsurprisingly, the relationship remained rocky the rest of the way. As New York piled up losses and Randle continued to miss shots he had made a year earlier, the crowd continued to get on the team's highest-paid player. Making matters worse, Randle's lack of effort, especially on the defensive end, drew the intense ire of the fan base.

Poor shooting or effort errors (such as giving up an easy bucket because you close out too hard) are frustrating but forgivable. However, New Yorkers won't tolerate consistently failing to box out or hustle back on defense. And, for long stretches this winter, Randle was guilty of such offenses.

Last month, Marc Berman of the New York Post reported that people around the league felt Randle was "acting in a 'James Harden type of way' that suggests he wants a new place of work next season."

Berman added that "some NBA sources believe the Knicks will shop Randle for a package revolving around a center if they lose Mitchell Robinson."

Randle has said publicly he wants to remain in New York, but has also stated that his wife and young son were forced to leave their courtside seats at some home games this season due to unwelcome comments from the crowd. Being traded to a new franchise could allow Randle to start fresh and hopefully re-establish himself as an All-Star.

The best resolution for both the player and the team may be parting ways this summer. 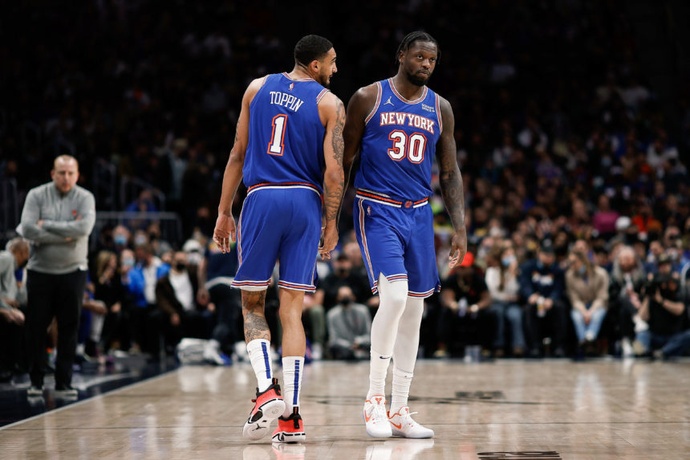 From the Knicks' perspective, trading away an All-Star less than a year after you ink him to a max extension is never ideal. The front office hoped Randle would be a foundational cornerstone for the remainder of his prime. However, New York must acknowledge that this past season was a mess in more ways than one.

Interestingly, one bright spot over the second half of the season was the awe-inspiring play of Obi Toppin. When a sore quad sidelined Randle in late March, the No. 8 overall pick in the 2020 NBA Draft stepped in and most definitely stepped up. Fans who had been begging for Toppin to see more minutes finally got their wish.

Toppin started each of the Knicks' final five games and averaged 27.2 points, 6.2 rebounds, 3.8 made three-pointers, 2.8 assists and 1.0 blocks. He shot over 55% from the floor, over 46% from downtown and over 86% from the charity stripe. He was one of just seven players to average more than 27 points and 6 boards per game in April. The other six were Jokic, Embiid, LeBron, Luka Doncic, Pascal Siakam and Kevin Durant. (And of this group, Toppin and Doncic were the only players to knock down more than three treys a night.)

While it's foolish to make too much out of relatively meaningless games late in any season, it's impossible to watch Toppin and not recognize he possesses tantalizing upside. And remember, this is the same dude who was named the NCAA National Player of the Year in 2020 due to his dominant play at Dayton, where he averaged 20.0 points to go along with 7.5 rebounds while shooting a scorching 63.3% percent from the field and 39.0% from behind the arc.

Toppin will be due for a contract extension of his own soon, and the Knicks need to determine if he is worth a hefty investment. Trading Randle would open a spot in the starting lineup for Toppin, who is closer in age to the Knicks' young core of Barrett, Immanuel Quickley, Quentin Grimes, etc.

The issue for New York is that it would have to "sell low" on Randle relative to where his league-wide value was just six months ago. Would the Knicks be content to trade him away if they would only be able recoup around 70 cents on the dollar? On the other hand, would another team be willing to trade for the $100+ million remaining on Randle's contract?

My guess is that the all-around skill set Randle showcased in 2020-21 will be more than enough to entice a few general managers.

Keep in mind that even in a "down year" in 2021-22, Randle averaged 20.1 points, 9.9 boards and 5.1 dimes. The only players to exceed those numbers in each category this season were Jokic and Giannis Antetokounmpo. In addition, although Randle's contract is certainly not a bargain, it's not an albatross by any means — even with its 15% trade kicker.

More than 50 players in the league will earn more than Randle next season. A contract averaging around $26 million a year is reasonable for a player with Randle's immense talent and proven durability (he's appeared in 207 of a possible 222 games over the last four seasons).

Also, the fact that Randle is under team control for at least three more years (he has a player option for 2025-26) would appeal to several teams, especially small-market clubs.

Furthermore, there are always other GMs looking to move their own high-priced players due to positional log jams or salary constraints.

For instance, multiple league insiders have reported that the Indiana Pacers are "open to trade conversations around Malcolm Brogdon and Buddy Hield this offseason." Brogdon, whose name has been bandied about in trade rumors since Indiana acquired Tyrese Haliburton in February, has three years left on his deal. He and Randle have nearly identical salaries for next season, meaning they could be swapped straight up for each other.

With the Knicks still in desperate need of a point guard, which side would say no to a potential Brogdon-Randle deal?

It's also worth noting that Jake Fischer of Bleacher Report recently reported Charlotte Hornets forward Gordon Hayward is "interested in a change of scenery this offseason." A swap sending Kemba Walker, who is still beloved in Charlotte, and Randle to the Hornets in exchange for Hayward works under the cap. Would Charlotte be willing to include draft capital to get a deal done?

We know the Los Angeles Lakers would love to rid themselves of Russell Westbrook, who has just one year left on his current contract. And if we're thinking outside the box, would the Knicks be willing to consider a reunion with Kristaps Porzings?

The point is, if New York is genuinely willing to make Randle available, the franchise will have plenty of interested parties, which could make for a very interesting offseason.