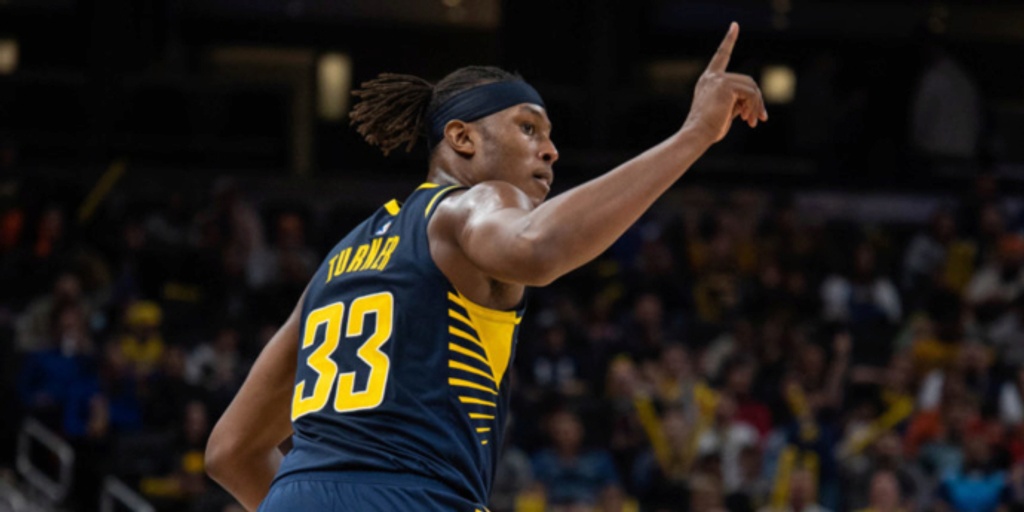 The Indiana Pacers are finally embracing a rebuild. After years of toiling around in mediocrity, the Pacers realized their slow start and league-low attendance weren't going to turn around anytime soon. According to The Athletic’s Shams Charania and Bob Kravitz, Indiana is open to trading the following players before February’s deadline: Caris LeVert, Domantas Sabonis and Myles Turner.

We already covered five potential destinations for LeVert, who quickly became expendable with Chris Duarte emerging as a long-term building block. Nekias Duncan has some trade ideas cooking on Sabonis as well. So now, to round things out, it’s time to reveal the best win-win deals involving Turner.

Unlike Sabonis, who some teams may need to reinvent their entire system around, Turner is the ideal complementary piece for any contender looking to take a leap forward — this season and beyond. As a modern center who can stretch the floor and block shots at an elite level, many teams will be calling Indiana to inquire about a potential deal.

I already mentioned Turner to the Hornets as a perfect fit for both player and team last week when discussing five potentially playoff-altering trades before the deadline. Charlotte is so close to taking a massive step forward in the Eastern Conference. All the Hornets need is an adequate rim-protector to help them from leaking too many points to opponents on a nightly basis. Acquiring Turner not only solves that issue, it also raises the ceiling for young superstar point guard LaMelo Ball as well.

Imagining Turner catching lobs from LaMelo and spacing the floor is so much fun, in addition to what he would provide defensively. Charlotte’s potential core of Ball, Miles Bridges, Terry Rozier, Gordon Hayward and Turner would be a well-put-together starting lineup. The Hornets could still have James Bouknight and Kai Jones developing off their bench as long-term lottery tickets too.

With Turner expected to fetch a nice return for Indiana, what actually makes sense in terms of an offer? There are two different scenarios to parse through:

The only reason why Hayward is included here is because we already know Indiana was seriously pursuing the former Indianapolis native during the 2020 offseason. When the Pacers offered Turner for Hayward in the past, former Boston Celtics general manager Danny Ainge didn't budge. Hayward instead bolted to Charlotte, receiving a big bag of cash in the process.

Would Indiana be open to revisiting a similar package 18 months later?

Pacers owner Herb Simon has been reluctant to dip his toes into any luxury-tax payments, so we know that’s not happening as sellers. So, how about this Hayward-centric return to try out a “soft rebuild” or retool?

Hayward would slide in as the 4 next to TJ Warren on the wing, forming an interesting duo. Washington’s role in Charlotte isn’t growing anytime soon, so giving the former lottery pick a bigger opportunity in Indiana makes sense as well. And from a pure fan perspective of putting butts in the seats, Brownsburg, Indiana native and former Butler Bulldog Gordon Hayward absolutely does that.

From Charlotte’s perspective, it’s a massive win. Acquiring Turner raises the team's immediate and long-term ceiling, with Lamb and Holiday bolstering that bench.

I doubt Indiana would be interested in Oubre, so let’s roll with the options revolving around Hayward. What do you think of this big move for both sides?

As I mentioned yesterday with LeVert, keep an eye on New Orleans as the most desperate team in the NBA. Pelicans executive vice president David Griffin knows the hourglass could soon be running out on his tenure, plus Zion Williamson’s injury history continues to pile on.

How about acquiring Turner as an ideal buffer between Brandon Ingram and Zion? It makes a lot of sense to help out a team that's in desperate need of a consistent defensive identity.

Turner is an absolutely perfect third piece to the puzzle in New Orleans, and hopefully a healthy and dominant version of Williamson reappears as well.

However, for a valuable piece like Turner, what would the Pelicans need to send back the Pacers’ way? Hint: it’s going to be a lot.

Here’s what I cooked up for a potential Pacers-Pelicans blockbuster revolving around Turner:

Indiana acquires two young assets in Lewis and Hayes, plus another player yet to hit his prime with Hart. The two first-round picks from the Los Angeles Lakers and Milwaukee Bucks are the icing on top of the cake from the Pelicans.

Yes, the Pelicans have Jonas Valanciunas and he’s playing at an awesome level right now, but you have to begin thinking about accelerating the rebuild. New Orleans could play Turner and Valanciunas together at some points if necessary, but they could reroute the 29-year-old Valanciunas with his value at an all-time high.

With all three players age-25 or under, a trio of Williamson, Ingram and Turner is something to invest real assets into before it’s too late. 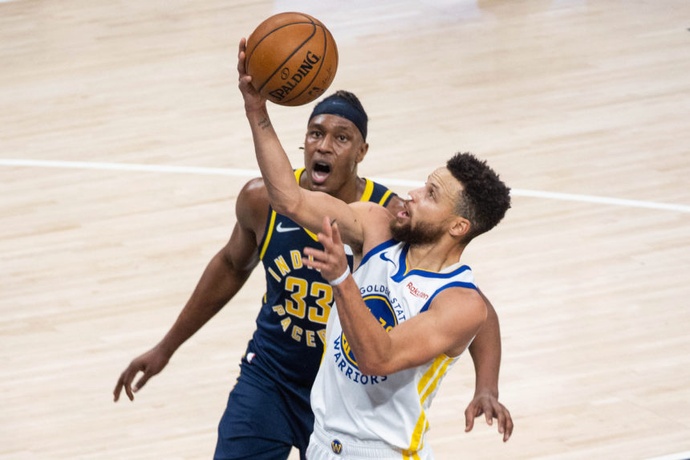 Could you imagine Turner in the same role Kevon Looney is filling right now for Golden State? The Warriors’ defense would be incredible, and completely unfair. Turner and Draymond Green would make up a terrifying frontcourt duo, plus the former’s floor-spacing is an ideal fit in Golden State’s offense.

From Indiana’s point of view, though, what makes sense in return for Turner? If I’m in Pacers president Kevin Pritchard’s shoes, I’m holding out for Jonathan Kuminga in any Turner deal with Golden State. If push comes to shove with the Warriors refusing to include Kuminga, the following may make sense for both sides:

Indiana would acquire two young prospects in Wiseman and Moody to add alongside Duarte and fellow first-round pick Isaiah Jackson. Golden State would probably become the true NBA Finals favorite bringing aboard Turner, plus a sharpshooting wing who can provide spot minutes in Martin.

The Warriors have the assets to make a title push even more likely. Don’t be surprised if they have already called Indiana about Turner or Sabonis, because either one makes this team even more of a juggernaut in the Western Conference.

This one is interesting, especially when you consider it would be Pacers 2.0 all over again with an offense-first big alongside Turner in Nikola Vucevic. However, Vucevic's contract expires after this season. If the Bulls retooled a little bit and moved Vucevic this summer, could you imagine the spacing and defensive versatility a frontcourt duo of Turner and Patrick Williams would provide? That sounds like a massive upgrade to me, allowing the ball to be in the hands of Zach LaVine and DeMar DeRozan even more.

Indiana would of course ask for Williams if the team were to trade Turner within its own division, but that would be a swift, "No." Instead, what about this compelling offer with a young prospect, salary filler and multiple first-round picks going back to Indiana?

Assuming Turner coming aboard would put into motion a long-term vision of him and Williams sharing a frontcourt (the more I talk about it, the more I love this idea), Chicago could offload Vucevic this offseason to recoup some sort of draft capital lost here.

LaVine and DeRozan being insulated defensively by the likes of Lonzo Ball, Alex Caruso, Turner and Williams is a dream scenario for Chicago. This would make the Bulls a terrifying team in the East for years to come.

Meanwhile, Indiana could be the ideal reset for a former lottery pick in White, who wasn’t selected by the Bulls’ current front office regime.

Another Central Division team knocking down the door of Indiana? Again, this one seems far-fetched, but the possibilities are endless here. Imagining a modern big like Turner alongside Giannis Antetokounmpo brings forth mouth-watering possibilities for the Bucks.

However, with little draft capital, would Indiana even be interested in a package revolving around Brook Lopez’s contract and Donte DiVincenzo? Maybe with a future pick or two thrown in, it could entice a conversation with Indiana.

Don’t forget, there’s already trade history between these two divisional teams. When the Pacers pulled off a sign-and-trade for Malcolm Brogdon, it was structured to be a win-win deal for both sides.

Could history repeat itself with Turner joining the Bucks this time around? 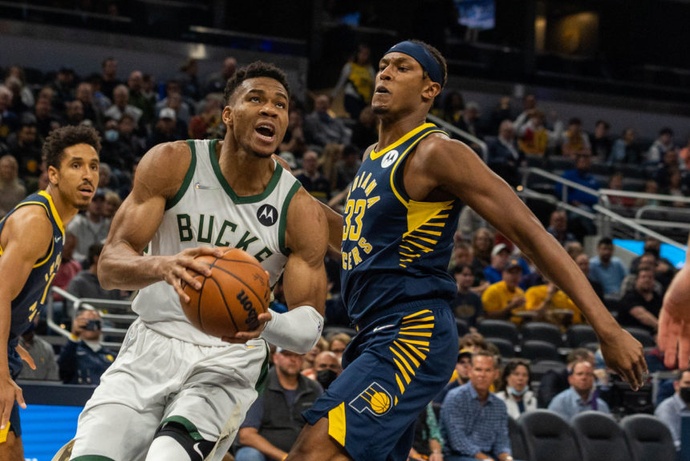 Plopping Turner within the Bucks’ core is a game-changing move for them. Immediately, Milwaukee would stake its claim as the top team in the East in 2021-22 and beyond. Turner’s shooting and rim-protection would essentially give Milwaukee a younger version of Lopez.

I would say this move is doubtful, but don’t be surprised if Milwaukee calls about Turner to try to go all-in as they look to repeat.

Portland needs to do something soon. Damian Lillard is obviously frustrated with the direction of the team, so what’s going to happen with the Trail Blazers’ roster? As a team with little to no defensive integrity, currently and historically, inserting Turner would be a massive win for Portland.

Turner would become an immediate upgrade over Jusuf Nurkic, who would be sent back to Indiana as salary filler in this scenario. On top of Nurkic, the Blazers would attach promising combo guard Anfernee Simons.

Although Portland loves what it has seen from Simons and Nassir Little in terms of player development, these types of moves have to occur in order to raise the ceiling and floor of the team's current roster.

From Indiana’s perspective, this deal is very interesting. The Pacers’ primary prize here would be Simons alongside a future first-round pick. (Nurkic may even be flipped again or bought out since a rebuilding team has no need for a veteran big on an expiring contract). Seeing Simons in a bigger role would be very intriguing, and that's exactly what would occur in Indy alongside Duarte.

So, there we have it. Six teams who stand out as possible landing spots and who should be banging down Indiana's door in pursuit of a perfect modern big man.

This isn’t even the tip of the iceberg in terms of Turner’s potential destinations though. Many other teams not listed will certainly call about the 25-year-old. As a floor-spacer and rim-protector who might not have hit his true ceiling yet, expect over the half of the league to inquire about Turner in some fashion.