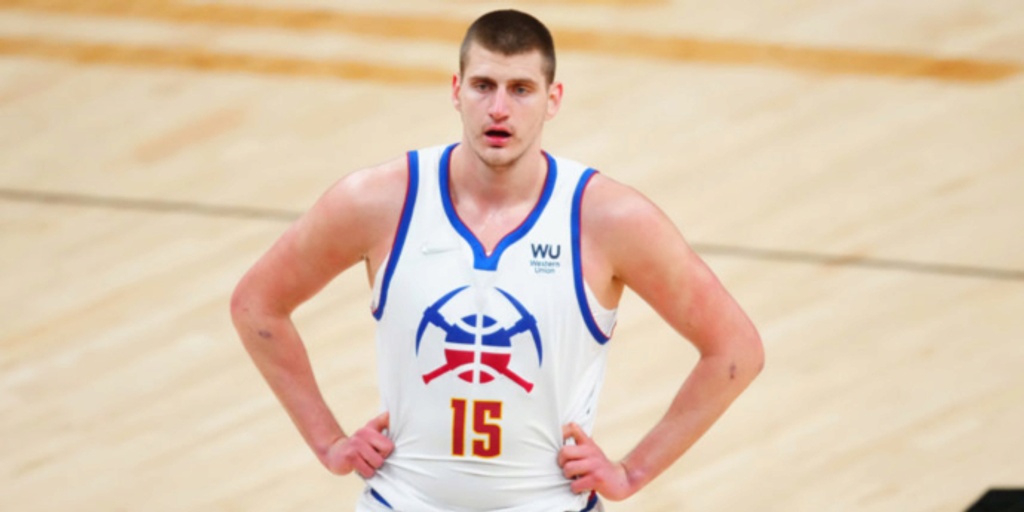 Even without Jamal Murray, Nikola Jokic expects Nuggets to contend

Russell Westbrook found his way back home to Los Angeles to fight for a title with the Lakers, and the Brooklyn Nets figure to have its say when Giannis Antetokounmpo sets his sights on a repeat.

Of all teams, one would perhaps make the case that the Denver Nuggets are the NBA's dark horse flying under the radar. And it makes sense considering the fact that they’ve taken the fairly unorthodox route of relying on internal progression to help them get to the next level.

In all likelihood, the squad will only go as far as Nikola Jokic and Michael Porter Jr. can carry them... at least until Murray eventually finds his way back into the lineup.

Unfortunately for the club, the young Canadian is expected to miss a significant portion of the regular season as he continues to recover from an ACL tear. Denver has been fairly mum on his progress, but the league’s reigning MVP isn’t ready to sell any stock in his team just yet.

Jokic met with reporters on Sept. 22 as a part of Nuggets media week to address a number of topics, including whether Denver enters the season believing themselves to be a contender knowing Murray will be on the shelf.

Obviously, he exhibits confidence in that; however, Jokic acknowledges that he and his teammates have a long journey ahead before they begin thinking about a grueling playoff run.

“Yes, of course,” he said when asked if he feels his club should be in the NBA title conversation, even without Murray. “If everybody buys in and everybody plays the right way, there is a chance, of course.”

That said, the league’s reigning MVP — at least in part — got to where he is by focusing on one task and one game at a time, and that seemed to be his message on Wednesday.

“Do we have enough talent? I don’t know," Jokic said. "Are we the best team in the NBA? I don’t know, so we will see. The season is going to show us everything.”

Porter, in a recent interview with Clutch Points, was vocal about his desire to become an All-Star and to build upon his successful campaign last season. During the 2019 postseason, Porter came under fire for publicly making comments perceived as critiques against Nuggets head coach Michael Malone’s staff. He subtly demanded more touches on the offensive side. He then answered the call last season when Murray went down on April 12.

With the additional responsibility and repetitions, Porter increased his scoring average to 23.5 points from the 17.3 points per game he averaged before Murray went down. What was more impressive, however, was the fact that Porter took more shots a night and converted at a higher clip. He made 53.4% of his 12.5 field goal attempts prior to Murray’s injury, and 56% of 15.8 tries after.

“Last season was definitely a big step for me,” Porter told Clutch Points. “[I] played pretty well. Took leaps on a lot of areas. I’m looking to make a similar leap this year.”

After being acquired from the Orlando Magic, Aaron Gordon signed a four-year, $92 million extension this past summer, while fifth-year man Monte Morris has let it be known that he’s aiming for the starting point guard spot in Murray’s stead.

All around, in Denver, there are hungry players who have something to prove and quite a bit to play for.

But Jokic knows that slow and steady is what wins the race.

“The goal for the season...? Of course, everybody is saying a championship, that’s what we’ve been saying for the [last] seven years,” he said on Wednesday.

“So I’m not going to say championship... Of course we want to [win] the championship, but there are a lot of boxes you have to check to make that [a reality].”

If there’s one thing to be taken away from Malone’s tenure with the club thus far, though, it’s this: they’ll certainly be working to that end.

For Denver, the upcoming campaign will be about redemption and proving themselves to be a team that has truly arrived as a contender for the conference’s crown. With all the Lakers have done and Klay Thompson’s return to the Golden State Warriors, the Nuggets haven’t really done anything worthy of grabbing any headlines this offseason.

Considering the rather humbling sweep they suffered at the hands of the Phoenix Suns last season, though, if they’re blessed with health this season, things could be different.

At the end of the day, the reigning MVP knows that it all lands at his feet.

“But everybody is getting back, we’re gonna have pretty much the same team, the same core... If everybody does their job, the house is gonna be calm. I’m just trying to be ready for the next season, that’s my job.”

Humbly, he’ll continue on, performing his work. And when the dust settles, with the right ingredients, Denver hopes to be one of the final few standing with an opportunity to call itself a champion.

Yes, the path to the NBA Finals may go through Brooklyn out East and Los Angeles on the west coast, but with a toiling squad led by a reigning MVP, Denver hopes to carve its own path, even if it means going through a great metropolis — just like Antetokounmpo’s Bucks did last year.

In Denver, the upstart club looks ahead to the 2021-22 campaign behind its MVP. The journey awaits.