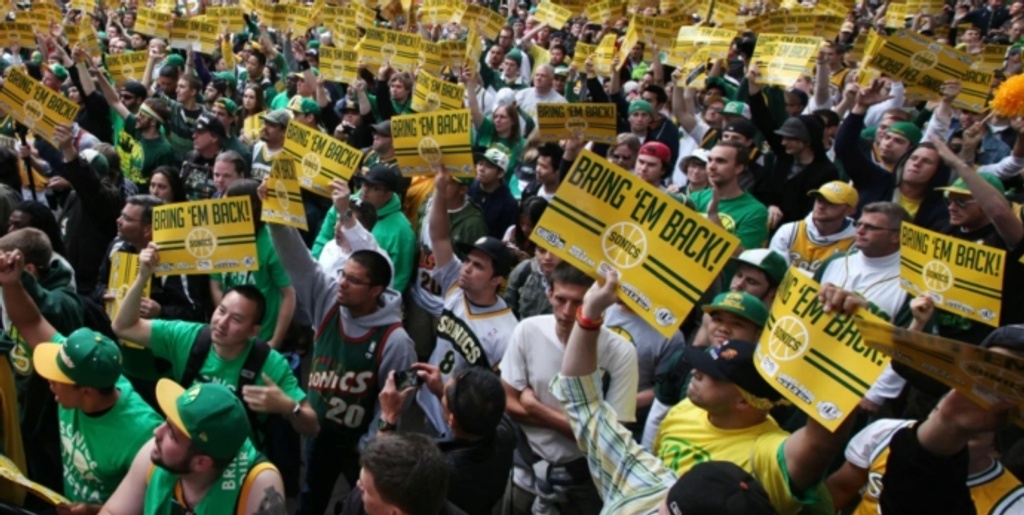 NBA Expansion Mock Draft: What would a new expansion team look like?

Expansion in the NBA is on the horizon, even though it’s a subject that has been put on the back burner as of late. In three years, the Association will be entering a new media-rights deal that is expected to blow their current figures out of the water and cause the salary cap to increase significantly. Could that be the perfect time to add an expansion team or two?

When asked about the possibility of expanding the league last season, NBA Commissioner Adam Silver insisted that it isn't currently on the table.

“Maybe there are people talking who are not at the league office about us potentially expanding after the 2024 season, [but] we are not discussing that at this time,” Silver said this past season. “As I said before, at some point this league will invariably expand, but it’s not at this moment that we are discussing it. We’ll be looking at it at some point, but there’s no specific timeline right now.”

We're entering a new golden age of basketball, where talented players can be found all around the world and teenage prospects have more options than ever before. The NBA can afford to add an expansion team in the near future, and they may even be able to increase the league to 32 teams (like the NFL). There are enough talented players to fill out these rosters.

Which cities make the most sense for an NBA expansion team? Two cities immediately come to mind: Las Vegas and Seattle. These cities have been rumored for years and are the obvious choices.

Last month at NBA Summer League, Silver told Mick Akers of the Las Vegas Review-Journal that the city could accommodate a team. Silver also alluded to how much revenue Summer League brings into Vegas, bringng in similar numbers as All-Star Weekend.

“All of our events, when we’re thinking about going to so-called neutral markets, Las Vegas is always in a top group of cities we can consider,” Silver told Akers. “You have incredible hotels, entertainment outside of basketball and great facilities. Without being specific as to the events, we’re always thinking of Vegas as a possible destination.”

Silver has said that Las Vegas "has shown itself to be a great sports market" and that when the league seriously explores expansion, there is "no doubt Vegas will be on the list."

Las Vegas continues to explode, as many people are moving there as full-time residents. Their sports teams have been surging too. The Las Vegas Raiders successfully moved from Oakland to historic fanfare, and the Vegas Golden Knights have had immense success in the market as well. Now, the Oakland A’s are considering a move to Sin City too.

Nevada governor Steve Sisolak believes that landing an NBA team within the next five years is a real possibility. Earlier this offseason, LeBron James let it be known on "The Shop" that his goal is to own a team and bring it to Vegas.

"I wanna buy a team, for sure. I want a team in Vegas," James said in June.

In addition to Las Vegas, Seattle continues to be at the forefront of any potential expansion talks. We all know about the Seattle SuperSonics' history, and the fact that the Sonics were ripped away from the city is still disappointing to this day. Now, there’s a ton of excitement around the NHL's Seattle Kraken and the WNBA’s Seattle Storm, and Climate Pledge Arena is ready to host an NBA team.

Paolo Banchero, the No. 1 pick in the 2022 NBA Draft, recently talked about how his hometown is craving an NBA team on “All The Smoke” with Stephen Jackson and Matt Barnes.

“I think it needs to happen, I think it should be mandatory. Not just because I’m biased, but because it’d be a great look on the NBA,” Banchero said. “It’s a great city, the fans there are crazy. If you get a team in Seattle, they’ll automatically be a top… not the top, but a top fanbase. Those games would be sold out right away.”

It's very possible that NBA expansion could become a hot-button topic in the near future.

How exactly does the NBA's expansion process work? Well, we have a somewhat recent example to look back on, as the Charlotte Bobcats were added to the league as an expansion team 18 years ago.

The most-recent NBA Expansion Draft took place on June 22, 2004, and the Bobcats selected 19 players to construct a roster for their inaugural season. Here were the main rules in place:

Charlotte landed a future All-Star in their expansion draft, selecting Gerald Wallace after the Sacramento Kings failed to protect him.

If a similar draft happened now, which players would go unprotected? What kind of squad could be built via a present-day expansion draft? Let's find out!

This experiment will help determine whether there's enough talent to fill out an extra NBA roster. Each team will protect eight players from being selected. Here are the players we've protected:

That's 240 total players who were protected across the 30 NBA teams.

Which players were left unprotected? Here's the talent pool that the expansion team will be able to choose from:

Using the same rules and cap restrictions that the Bobcats had to follow, what is the best hypothetical expansion team that we can build (with the restricted salary cap and long-term outlook in mind)?

Seeing how Rubio has impacted teams in recent years — most recently with the Cleveland Cavaliers and Phoenix Suns — he was a must-have in the expansion draft. Rubio's calming presence and overall playmaking chops make him a perfect piece for the starting unit. Meanwhile, Morris and Pritchard provide some nice depth. Hopefully, Pritchard takes the baton from Rubio and Morris as our long-term answer down the road.

KCP has proven to be a very versatile wing over the years, so it made sense to add him out of all the intriguing veteran options. In addition to spacing the floor, Caldwell-Pope will draw the toughest defensive assignment each game. Snagging Martin away from Miami was a huge win as well, because he checks nearly identical boxes to KCP. Rounding out the position, the expansion squad needs a bonafide perimeter threat, so why not add a cheap one in Mathews? We're betting that he'll pick up right where he left off after his resurgent campaign in Houston, especially if given ample minutes within our rotation.

Will Warren return to Orlando Bubble form upon his arrival? Doubtful, especially with consecutive stress fractures causing him to play four total games over the last two seasons. However, if Warren checks out medically, there's no denying that he can score the basketball. He'd have the green light to shoot in our offense, so don't be stunned if Warren becomes the team's No. 1 option immediately. Porter is an ideal veteran wing to place upon any roster, as he showed last year with the Golden State Warriors. Porter is valuable insurance with Warren's checkered injury history. And why not roll the dice on Reddish? His NBA transition has been anything but smooth, but if the 22-year-old fits within the system, this could pay huge dividends down the road.

After developing with the Oklahoma City Thunder over the last few years, Bazley is one of our top selections in the expansion draft. Not only does Bazley have the necessary upside that we covet long-term, the 22-year-old fits well within our short-term plan as well. Immediately, Bazley will enter as a starter on the wing and he'll have an opportunity to show what he's got. Behind him, I love the addition of Green as a tough two-way presence who continues to fly under the radar in Chicago. Livers is another young addition who adds depth and two-way potential. (If you haven't already, check out Spencer Davies' excellent feature on Livers from last week).

Closing out the roster, we couldn't be happier with our committee approach. Looney and Nance instantly become key pillars to our expansion team and really blend together well for lineup purposes. Who knows, maybe we even see some minutes where this duo shares the court when opposing teams go big. Outside of our strong center duo, we needed to add one more player who brings a different overall flavor. Reid accomplishes exactly that with his blend of offensive talents that can be utilized extremely well within small-ball situations.

After looking at this roster, we'll let you be the judge: does the NBA have enough talent to add an additional franchise (or two)? What would your expansion team look like?

Perhaps the NBA could tweak their previous expansion-draft rules just a bit (especially if the league adds two expansion teams). For example, what if each team could only protect six players instead eight? The hypothetical expansion roster would be even better and might actually make a push for the play-in tournament, if everything fell perfectly into place.

Right now, expansion isn't on the forefront of NBA decision-makers' minds. With that said, it seems like a lock to happen at some point in the future, and it's something to monitor in the coming years.