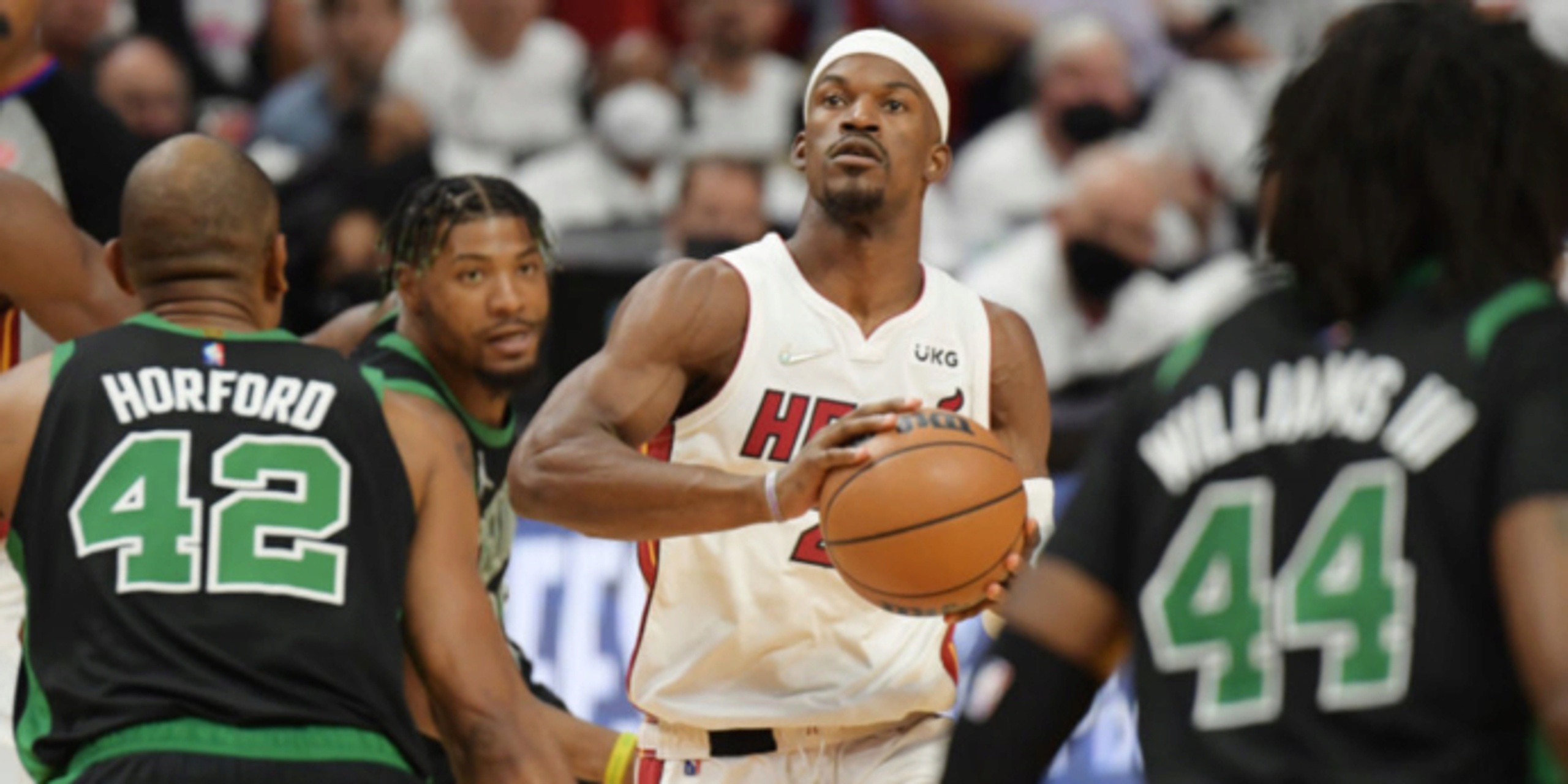 The Heat have a big-big problem on their hands

The core tenet of Spoelstra has been taking away shots at the rim. It's been done in multiple schemes, with their own unique twists.

It's been Dwyane Wade flying around as the league's smallest weak-side helper — the Heat ranked second behind the Dwight Howard-led Orlando Magic in opponent rim rate during the 2009-10 season, per Cleaning The Glass, with Wade averaging 1.1 blocks per contest.

The Heat bltized and trapped like crazy during the Big Three Era when LeBron James and Chris Bosh joined the party. The post-Big Three, pre-Jimmy Butler era was the heaviest dose of drop coverage we've seen under Spoelstra, headlined by Hassan Whiteside.

(The gust of wind you just felt was the collective shudder from Heat fans.)

The Heat are switching a ton these days, a shade below Boston's rate this season, but they're showing plenty of help from the strong-side corner and the free-throw line area whenever a mismatch is given. Again, it's the Heat saying one of two things: you're flat-out not getting shots here, or you're gonna have to work to get there.

And if all else fails — or even when it doesn't — Spoelstra has had various zone looks he can sprinkle in to force an offense to work more east-west than north-south.

That leads us to this series, where the Celtics are dictating terms on offense. More specifically, the Celtics with a healthy frontcourt are doing the job.

The playoffs are about poking and prodding for a weakness you can repeatedly exploit. At the very least, teams have to live with something while hoping they can create enough goodness elsewhere to compensate. With Al Horford and Robert Williams on the floor together, the Heat haven't been able to thread that needle.

There aren't many similarities between Horford and Williams.

There's an 11-year age gap, on top of a massive difference in athleticism (advantage Williams) and scoring ability (advantage Horford). The two traits they do share — an ability to facilitate offense above the break and their sense for cutting off windows defensively — make them a fun pairing. A versatile pairing. A nearly impenetrable pairing when they're upright.

The Heat, known for toggling schemes and assignments on the fly, are boxed in when Horford and Williams share the floor. Because of the threat Williams poses as a lob-catcher and putback merchant, Miami can't comfortably stash a wing on him to free Bam Adebayo, the team's Defensive Player of the Year candidate, to defend either of the Jays.

But because of Horford's ability to get busy on the block, wings aren't really safe on him either. PJ Tucker is the lone player aside from Adebayo who can defend bigs or forwards with the same confidence, if not effectiveness, altogether. The issue there, of course, is that Tucker has the Jayson Tatum assignment.

Letting Adebayo and Tucker handle the frontcourt means Butler can only take Tatum or Jaylen Brown. Whoever's left has his choice of a fine-but-flawed defender in Max Strus, or an undersized-and-hampered Kyle Lowry.

This is the conundrum the Heat are faced with before even getting into what the Celtics are actually running. Their spacing. Their improved tempo in the half-court over the last two games.

To that point, the Celtics have posted a 115.8 Offensive Rating — the equivalent of the NBA's second-best offense if extrapolated over the course of a season — with the Horford-Williams duo on the court over the last two games, per Second Spectrum.

In Game 4, you saw the issues Williams could cause if Adebayo wasn't attached to him. Adebayo drew the Horford assignment, which left a smaller player on Williams. There just wasn't a match for his blend of size and vertical pop.

In Game 5, the Heat were diligent about Adebayo getting the Williams assignment. Naturally, the Celtics parked him at the dunker spot (subscribe!) and went to work elsewhere.

Inverted ball-screens were a flavor the Celtics enjoyed last night. It was a way for Tatum to further pick out a favorable matchup, then dare the Heat to help their way out of trouble.

Lowry and Tucker botch the coverage, opening up a slip from Derrick White. Butler is one of the best helpers from the nail in the entire league, but he offers no support since he has the Brown matchup. Adebayo doesn't even fully help on the White drive; he simply lunges and retreats back to Williams, an admission that stopping the lob is of more importance than a White push shot.

Horford himself got involved as a screener. He set 11 screens while sharing the floor with Williams, and the Celtics scored well over 1.3 points per possession on those trips, per Second Spectrum.

Between Horford's skill set and the fear of Williams at the rim, the Heat were consistently in pick-your-poison situations. If Horford (or Williams) weren't open, driving lanes were clearer for their teammates.

And then, there's the defense.

Frankly, the Heat haven't had a good time. Dealing with Boston's quartet of high-level on-ball defenders — Marcus Smart, White, Tatum, Brown — is enough to keep you up at night. Add in the versatility of Horford and Williams, and it's easy to see why the Heat haven't scored in bunches.

(Oh, since they won't say it: Most of Miami's top scorers and shooters dealing with some sort of physical ailment makes the job even more difficult.)

Beck to the on-court product, the blend of elite personnel, scheme versatility and Miami's own shortcomings have made for tough sledding in the half-court. Most of Miami's pet actions can be switched on the perimeter.

There have been small pockets to attack when Boston's in drop coverage, but that's exactly the point. Aside from Game 1, the pockets have been small, man. It's been pull up or bust for the most part, and the Heat haven't made them pay.

The Heat have mostly tried to engage Horford on that front. I'd assume it's because Horford's drop has been a little steeper, giving ball-handlers more of a runway to drive or pull-up into. Unfortunately for the Heat, they haven't been able to take advantage of that space.

If a Heat ball-handler is able to gain an advantage, his options are to pull up against a solid contest or drive deep enough to force a peel switch with Horford. Running a high enough screen to shake the perimeter defender and beat Horford hasn't really been a thing, and all that does is engage Williams — often playing way off of Tucker — as the actual last line of defense.

I hope you're getting the points, because the Heat sure aren't.

How about this stat from Second Spectrum: Miami possessions featuring a pick-and-roll, while Horford and Williams share the floor, have generated 0.5 points per possession over the last two games. 50 points per 100 possessions. That is not a typo.

Trips featuring a dribble handoff haven't fared much better (0.74 points per possession), and collective size and active help have made Miami's split action from the post much less effective than it was in the regular season.

It should come as no surprise, then, that the Heat's half-court offense has been woeful over the last two games. A 61.9 would be a fantastic round of golf; a 61.9 ORTG in the half-court probably has Dr. James Naismith rolling over in his grave.

All isn't completely lost for the Heat. Spoelstra expressed optimism about Miami's half-court process after Game 5, saying a lot of the shots the team took (and missed) were more "in our wheelhouse." They've shown counters against Boston's drop, like this flip-it-and-reverse-it action for Duncan Robinson:

But ultimately, the margins are incredibly small. Though their shot quality improved in Game 5, they had to work so. freaking. hard. to. do. it.

It's a testament to how locked in Boston is defensively. They've pulled a Heat on the Heat, walling off the paint — only 26.3% of the Heat's shots have come at the rim over the past two games — and daring them to win from outside.

On the other side, Boston has slightly bumped up its rim rate — 30.9% over the past two games, and  31.6% overall in the series compared to 30.6% during the regular season.

That paint dominance begins with the Horford-Williams duo.