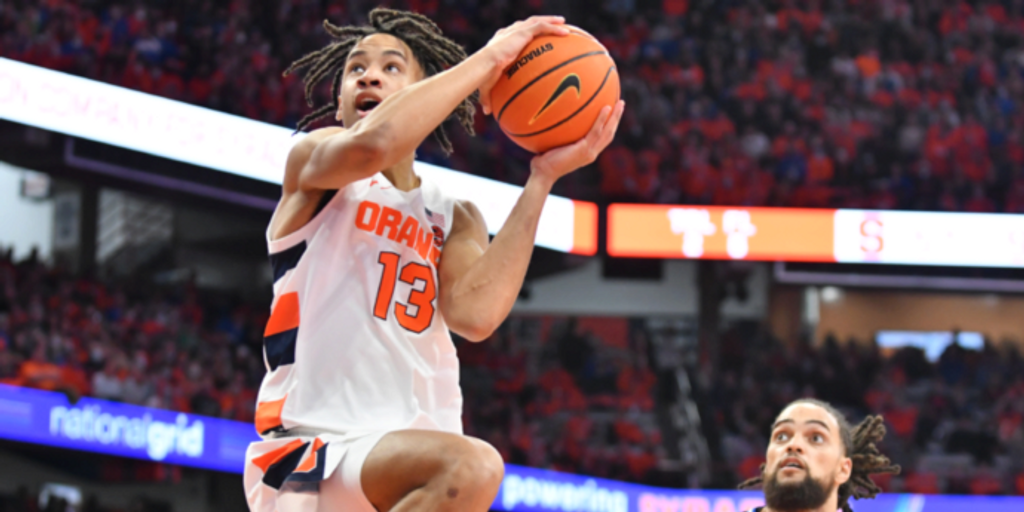 Derrick Coleman isn't confident Benny Williams will be back next year

Williams arrived at Syracuse as a five-star, top-25 prospect. In fact, he's the highest-rated recruit that Syracuse has landed in a long time. Fans couldn’t wait to see what a recruit of this caliber would do once he set foot inside the Carrier Dome.

However, this season didn’t go as planned.

Williams was relegated to the bench for the majority of the season, seeing inconsistent spot minutes and failing to live up to the expectations set for him. And while the majority of Syracuse fans were up in arms over Williams' lack of playing time, his status didn’t change.

It looked like things could possibly turn around for the freshman after a good showing in a lopsided loss to Duke (when he had 14 points and 6 rebounds on 71.4% shooting from the field). However, these hopes were crushed when it was announced that Williams would miss the rest of the season with a lower-body injury.

But what was strange was that he was not on the bench for the final game against Miami nor for the first game of the ACC Tournament against Florida State. This, of course, has led to more chatter and speculation from fans about the possibility of him not returning to Syracuse next season.

Syracuse legend Derrick Coleman was a guest on my podcast "The Rematch," and we discussed Benny Williams, his limited playing time and the likelihood of him returning next season. Below is an excerpt of our conversation.

Etan Thomas: "Let me ask you a question about the current team. It's been a tough season."

Thomas: "Cardiac 'Cuse! It's been a tough season. And there are a lot of aspects that are troublesome. One of them is: I saw what happened with Kadary [Richmond]. I saw his demeanor. I was watching him on the bench — watching him sitting there, not playing. Then, watching him when he played, he got in there and he did well, but there was no joy. There was no happiness. You know what I mean? He did what he did, and went back to the bench emotionless. So I knew he was going to leave. That's why I kept saying, 'He's going to leave if we don’t play him.' And I see the same thing with Benny Williams. And the thing about it, he’s from this area. PG County. I've seen him play. My son knows him and has seen him play for years.

"He is someone who is a special talent. And now it's setup to where it's like, 'I'm going to play you sparingly here, and then take you out, and then tell the media you're not ready.' Or, 'I'm not going to play you for four games, and then put you in for two minutes. After one mistake, I'm going to talk about that mistake publicly, and then tell the media again, 'That's why you're not ready.'' And that's the part that bothers me because I’ve seen this script before. Benny’s saying all the right things publicly. He's staying after the game, shooting, all that stuff, which is great because somebody's advising him very well, most likely his father."

Coleman: "Can you name anybody on our team the last two, three years that has been a top-30 prospect?"

Coleman: "So how you got a top-30 prospect sitting on the bench when nobody on our team is a top-30 prospect? That's sad. But the thing that I don't like about it [is]: You're playing with kids' lives, their livelihood, and just what you just said, he now has no enthusiasm. No joy. So now you’ve sucked the soul out of me so now the game of basketball, something that I love, is not fun anymore."

Coleman: "So when it's not fun, okay, I got to go somewhere where it's going to be fun for me again. And just like you say, I sit and... Every time Seton Hall plays, I'm watching because I'm rooting for [Kadary]."

Thomas: "He puts on a show too, every single time." 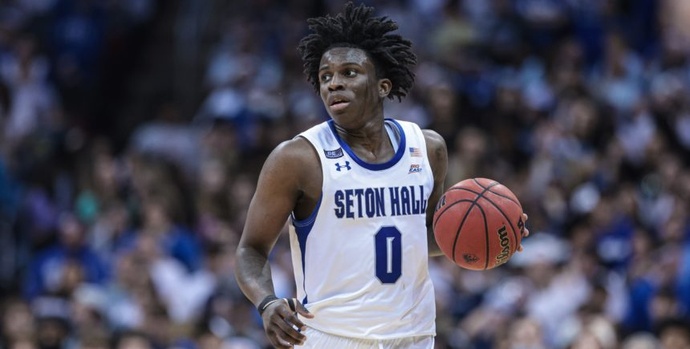 Coleman: "Because it doesn't make any sense what's going on at our university. And you cannot do that."

Coleman: "You’re taking the life out of a kid, man. He's no longer having any fun, and nothing that he's doing in the game of basketball is fun anymore and it’s not supposed to be like that. Basketball is supposed to be fun, man. Like you said, you're not even having fun with your teammates."

Coleman: "The demeanor is dry. Your smile is dry. You know what I'm saying?"

Coleman: "You're not really engaged and then you’re constantly looking over your shoulder because any mistake..."

Thomas: "You're coming out."

Coleman: "And you’re going crazy about me making a mistake? When I'm coming out of the game, you’re yelling and cursing at me. I expect a mistake, Coach. Went from a 2-3 to a 1-3-1, Coach. Where they do that at?"

Thomas: "Right. Where they do that at? "

Thomas: "And somebody throws me a bad pass and I don't catch it, and it's my fault. And I get snatched out and I get fussed at. And you’re yelling and snarling and spitting and carrying on ."

Thomas: "And it's interesting because I've been on the Free Jesse [Edwards] campaign and rooting for Jesse for some time now. And I saw the same thing happening with him. Me and Roosevelt Bouie, we've been talking to him. He was in the same predicament that Benny is currently in — not getting to play, you saw the demeanor changing. Put him in for a minute, take him out. Publicly saying, 'He's not ready. He's not this, he’s not that.' Now, this year, Jesse is ballin'! You know what I mean? It's amazing what you can do with time on the court, being allowed to play through mistakes." 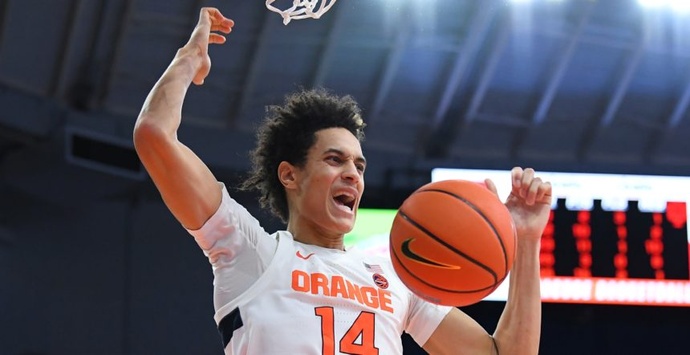 Thomas: "And then gaining confidence, and then you're able to produce because everybody's like, 'Well, oh, Jesse all of a suddenly learned how to play...' And I’m like, 'He could’ve done this last year!'"

Coleman: "Exactly. You gotta get a chance to have some type of rhythm out there on the court."

Thomas: "And that's where we, as Syracuse alumni, step in. I was talking to Jesse all the time, lifting his spirits and encouraging him — the same way that Roosevelt Bouie did with me when I was playing. You didn't go through any of that."

Thomas: "Come on DC, you know you don’t know nothing about that. Having the freshman blues where you’re sitting there in practice, looking at Coach Boeheim and you’re like, 'Let him say one thing to me today and this going to be the day! One thing, and it goin' down today!'" (Laughing)

Coleman: (Laughing) "But what you got to understand with me, man, everybody have a rock on their shoulder. I got a brick."

Coleman: "I got a brick on my shoulder. I'm raised by strong women, man. And I tell people that all the time: Man, the strongest person in my life has been my grandmother. Period. So I'm raised not to take no shit. I'm raised to be respectable and to have respect, regardless of what the situation is. You might not like me, don't like what I say or whatever I do, but you know what? You going to respect me. So I'm raised that way. And like I said, I used to go through my pitfalls and have my battles with Coach. But again, confidence, man. I would never let nobody take away my confidence from me."

Thomas: "Who were the older players, the vets, that came back and poured into you, while you was at Syracuse?"

Coleman: "Well, again, it started for me probably being up there, playing in camp. And I used to always play with Leo Rautins and those guys. So they used to always be up there. And then seeing Pearl [Washington], talking to Pearl a lot. Seeing Gene Waldron and Howard [Triche], you know what I mean? So as a freshman, I'm just trying to feel my way through everything. Like Derek Brower... I probably spent more time with Derek Brower [than anyone]... He was my ride, as a freshman, you know what I'm saying? He was my ride everywhere."

Thomas: "He's a character. He's so funny on Facebook."

Coleman: "A character, man! A great dude, but he is a character. But I spent a lot of times with him and Greg Monroe. Hhe actually gave me my nickname, Coast To Coast. Because people were always like, 'Why they call you Coast?' I say, 'Because I would grab the rebound and push it coast to coast. Greg Monroe gave me that nickname.' And it was always great having those guys motivate me just like I’m sure it’s great for Jesse to have you motivate him.

"But again, man, confidence is everything. And like you said, when I'm looking at Benny... Body language tells us everything. So when I'm sitting there watching the games, like we do, I see it. I see it in the kid’s face. The way he looks, his whole body language. He's just like, 'Man, I'm just here.'"

Coleman: "Exactly! So I’m like what’s going on? You know what I'm saying? And again, I don't see nobody better than him or with more upside."

Thomas: "And you better believe there are other programs, especially around the DMV, that would love to have him. I'm sure Maryland is on the horn... If they are smart, they're on the horn talking to his parents like, 'Hey, you’re not going to have to go through what you're going through there, over here.' I know it! Any coach should do that right now. So I'm a little bit doubtful [he returns]… I mean, he’s always saying all the right things. The media keeps asking him and putting him on the spot, but what is he supposed to say to the media? I hate it here and I can’t wait to get up outta here the first chance I get? But no, I don't have the confidence to say he's going to be back next year."

Coleman: "Me either. But why would he? Why would he come back to go through all of this stuff again that he did as a freshman? What’s really gonna change, Coach? How are you gonna convince me that anything will be different?"

Coleman: "It’s very unfortunate, because you’re playing with a kid’s life and he really has a chance to go to the next level. And now, you have this kid second-guessing himself out there and not even playing like himself anymore."

Thomas: "And like I said, I saw him in high school, the kid can play!"

Coleman: "I saw him too, he can go. Bounce, shoot, drive, defend, I saw him and said, 'Oh, he’s gonna be special.' So now, he may be special for another school and that’s terrible."