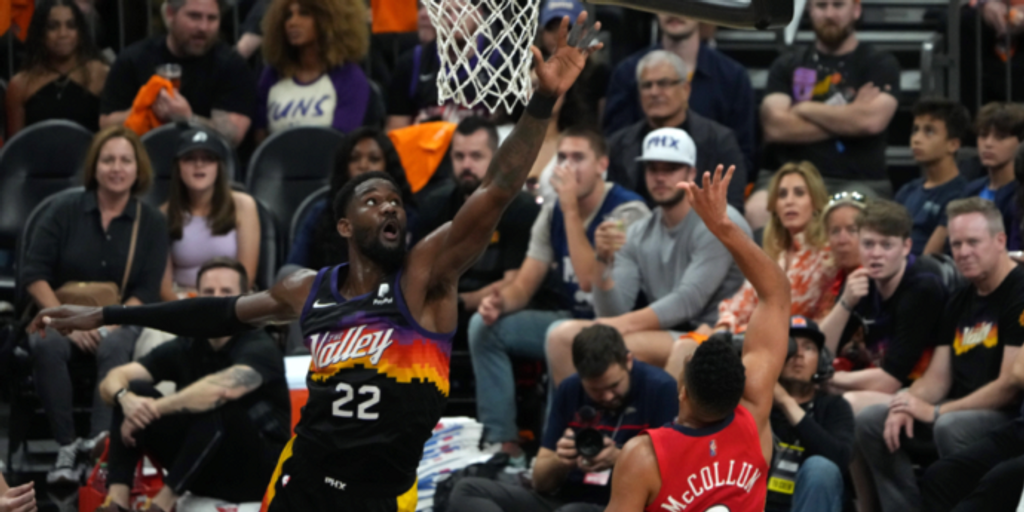 As has been the case all season long, the Phoenix Suns added another double-digit victory to their resume by defeating the New Orleans Pelicans 110-99 in Game 1 of the NBA Playoffs.

Many moments stood out, as the Valley once was ignited by Suns playoff basketball returning for the second straight postseason.

However, we can't forget about the defensive performance we all witnessed from 2018 No. 1 overall pick Deandre Ayton. Once again, Ayton’s play stepped up when the stakes raised. Finishing with 21 points, 9 rebounds and 4 blocks on 10 of 15 shooting, Ayton's two-way prowess on display was nothing short of fantastic. Sure, Jonas Valanciunas gobbled up an absurd 25 rebounds, but Ayton won the first round of a back-and-forth, big-man battle.

Ayton looked the part of a monster, literally taking over possessions around the rim with the ferocity that made many fall in love with him during his lone collegiate season at the University of Arizona. The playoff version of Ayton continues to be a resource that pays big-time dividends for the Suns on both ends of the court.

“Yeah, it was fun,” Ayton said of his defensive performance postgame. “Just being that coordinator, telling my guys where the screen is coming from. I like sliding my feet. Just being out there causing havoc, especially in the pick-and-rolls we’re in. It was fun, and just protecting the rim as well. Making sure I protect the rim, do my best. Just get back and put a body on Valanciunas.”

Ayton’s defensive versatility was not only showcased with elite rim-protection ability, but also in being a special athlete to contain guards easily on pick-and-roll opportunities. According to ESPN Stats & Info, the Pelicans shot a paltry 2 of 20 (10%) Ayton was the primary defender. When Ayton has these moments defensively, it’s fair to wonder how high his two-way ceiling truly is.

“I thought the ability to guard smaller guys and force tough shots, I think there was a couple where he was guarding a smaller guy, and they tried to get to the basket and he sent it out of bounds. That allowed for us to set our defense,” Suns head coach Monty Williams said of Ayton after Phoenix’s Game 1 victory.

“He’s a weapon for us. When you’re in a late clock situation, you put a 7-foot athletic guy on the ball and trust him not to foul and force a tough shot, you’ll take it every time.”

Ayton's defensive clinic on Easter Sunday brought back an immediate reminder as to why he’s more than deserving of a hefty payday this summer. This version of Ayton changes everything for the Suns’ long-term window, one where this level of team success can carry for years to come.

Take a gander at how Ayton defended certain Pelicans on Sunday, per NBA.com's matchup data:

Effectively taking New Orleans’ three best players out of rhythm when they were matched up with him, Ayton’s locked-in mindset helped ignite an incredible first-half performance on the defensive end, allowing only 34 points by halftime.

“It was supposed to be 5 blocks, but he just protected our paint, man. We tell him that every day,” Devin Booker said postgame. “If somebody gets beat, you rotate. We have to his back when Valanciunas is in offensive-rebounding position and those other guys are crashing. We’re telling him sell out and stop the ball.”

It was apparent throughout Phoenix’s Game 1 win over New Orleans that this will be a very short series. Although the Pelicans are a scrappy, resilient group — which showed through once more with their valiant third-quarter comeback — the Suns are simply a few tiers above them.

And when the weapon in Ayton is fully loaded as an All-Defense-level rim-protector, the possibilities are truly endless for how the Suns can pull off victories.

This version of Deandre Ayton is one you don’t hesitate paying rookie-scale max-level money to. As he showed during Game 1, ‘Playoff Ayton’ is a truly different experience.