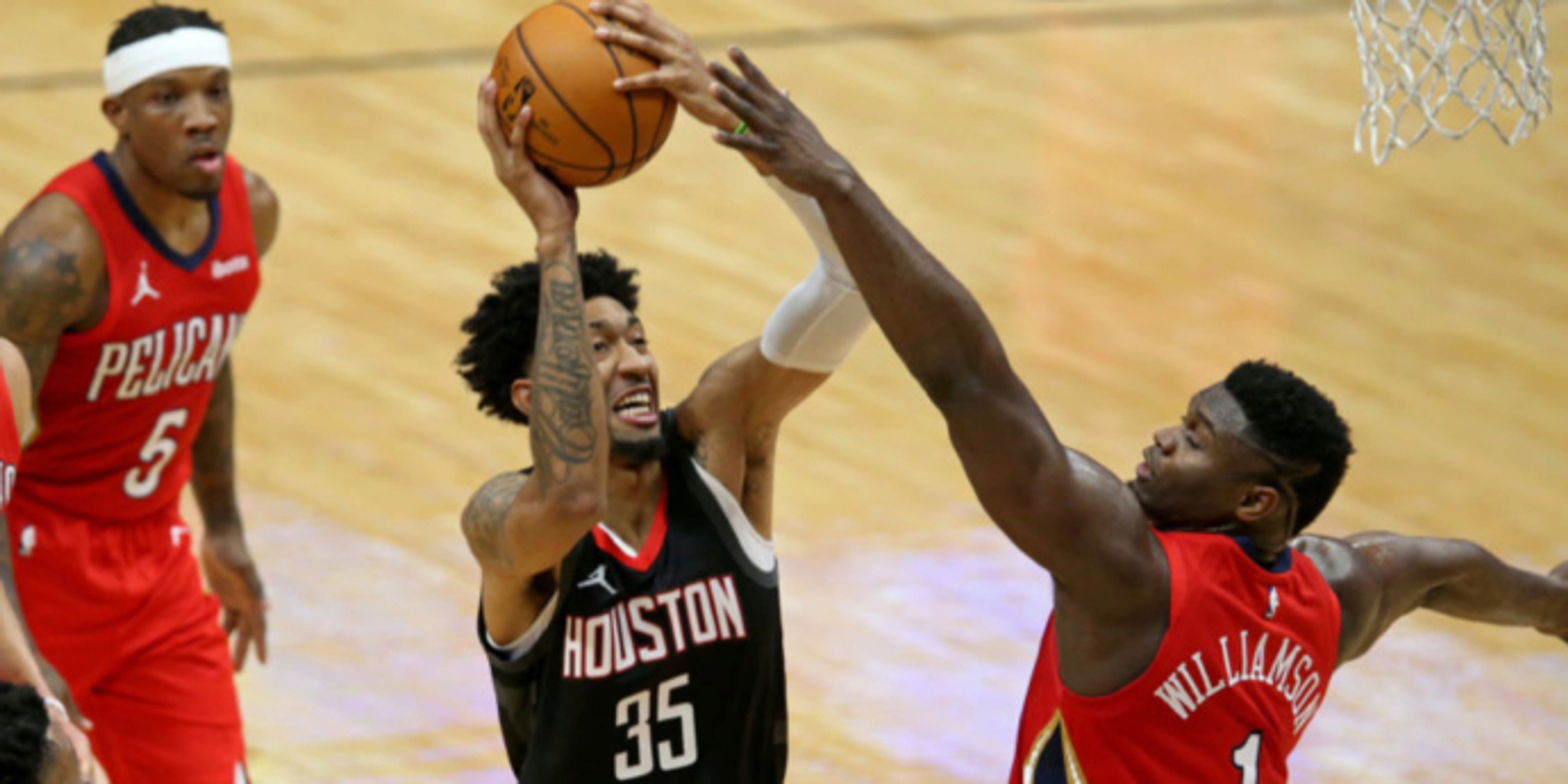 Closing the door on the NBA's 10 non-playoff teams

Before we look ahead to Lakers-Warriors (the most epic game of the week, one would think), the play-in tournament and all of the first-round playoff series that will begin next weekend, we need to take a closer look at the 10 teams that failed to make the expanded postseason and what to expect from them this offseason.

This will be play-in week for the eight NBA teams that qualified for the expanded postseason but did not finish top-six in their respective conferences. Two of them (the losers of the 9/10 games) will be finished with their seasons by Wednesday night, and two more by Friday, moving them into exit interviews and draft-prep mode.

But let’s start with a bottom-up look at the teams conducting exit interviews with their players today.

HOUSTON ROCKETS: The Rockets finished with the NBA’s worst overall record (17-55) and worst home record (9-27), and lost their season finale to Atlanta by 29. Since March 29, they lost 23 of 27 games. And let’s just say it wasn’t supposed to be this way when they opened the season with James Harden, John Wall and DeMarcus Cousins on their roster and immediately started getting huge production from Christian Wood. Not yielding to Harden’s trade demand in the preseason cost them; the deal that brought them Victor Oladipo actually didn’t turn out all that bad for them when they flipped Oladipo for a very productive Kelly Olynyk, but now there is talk of a buyout for Wall, who is owed $91.6 million over the next two years if he exercises his player option, as a long rebuild ensues. Olynyk will be an unrestricted free agent and will likely leave, which means the core they are building around includes Wood, Jae’Sean Tate, KJ Martin, Kevin Porter Jr. and whatever they can get for Eric Gordon, who injured his groin in early March and did not return. The next big date on their calendar is the June 22 draft lottery, and because they finished with one of the three worst records, they have an equal chance (with Detroit and Orlando) of winning the No. 1 overall pick, which is projected to be Cade Cunningham of Oklahoma State.

DETROIT PISTONS: A season that began with Derrick Rose and Blake Griffin on the roster ended with a 13-point loss to a Miami Heat team that rested most of its regulars, and Troy Weaver heads into the offseason with decisions to make on Cory Joseph (non-guaranteed $12.6 million), Rodney McGruder (non-guaranteed $5 million) and Dennis Smith Jr. (eligible for a $7.7 million qualifying offer). Assuming all of those are declined, but Hamidou Diallo’s $2.07 million qualifying offer is extended, the Pistons will have somewhere in the area of $20 million in cap room, depending on where the salary cap comes in following a season of vastly reduced revenues. Jerami Grant was a nice signing a year ago, and now the Pistons need to find some offense from the wing positions and hope Killian Hayes can have a full healthy season. Detroit had the league’s fourth-worst offense in terms of points per game. With Isaiah Stewart finishing the season so strongly, is there a market for the underrated Mason Plumlee?

ORLANDO MAGIC: A bottom-three finish seemed unlikely after they started 4-0 and had Nikola Vucevic playing at an All-Star level, and it never quite made sense that they offloaded Vucevic at the same time they got rid of Aaron Gordon and Evan Fournier. All-Stars do not grow on trees, and Wendell Carter Jr. (acquired from Chicago) was being outplayed by other bigs on the Bulls and now the same thing is happening on the Magic. They will have Markelle Fultz and Jonathan Isaac back next season, Otto Porter and his expiring $28 million contract now comes off their books, and the only contract decision they have to make soon is whether to pick up Dwayne Bacon’s $1.8 million non-guarantee. R.J. Hampton just won Rookie of the Month for May and Cole Anthony has shown plenty of promise as well. John Hammond, Jeff Weltman and Steve Clifford have roughly $28 million of cap space to work with, and the Magic have their own pick along with Chicago’s (top-4 protected). Choosing three of the top-33 draft picks will keep the scouting staff busy.

One of the most exciting rookies in the NBA!

OKLAHOMA CITY THUNDER: The only NBA team that never opened its arena to fans, the Thunder made the questionable decision to shelve Al Horford immediately after the trade deadline, after which they lost 26 of their final 29 games, and Shai Gilgeous-Alexander's injury was handled with extreme caution. Their victory over the Los Angeles Clippers on the final night of the season actually hurt them because it prevented a tiebreak situation with the Magic, who finished with a 21-51 record to OKC’s 22-50 record. Sam Presti is going to do what Sam Presti wants to do, and it will be interesting to see whether NBA commissioner Adam Silver addresses the unprecedented move that was made with Horford – something his predecessor, David Stern, never would have allowed. If the veteran big man and Gilgeous-Alexander had finished the season, we probably would not have the Spurs in the No. 10 spot. OKC was just five games under .500 in late March.

CLEVELAND CAVALIERS: Cleveland's trophy acquisition is Jarrett Allen, who was a superb pickup by Koby Altman. Still, they were unable to turn Andre Drummond into anything, and the loss of Darius Garland for most of the final three weeks of the season kept him from further developing chemistry with fellow backcourt speedster Collin Sexton. The Cavs still owe Kevin Love $60 million, and they must pay Taurean Prince $13 million next season unless they can find a taker on the trade market. He averaged only 10.1 points and 3.7 rebounds after coming over from Brooklyn, but Altman had to take him for salary-matching purposes. The Anderson Varejao re-signing was pretty cool, so we will give them that. Otherwise, the rebuild figures to be slow unless Love and Prince can be moved, which seems unlikely.

MINNESOTA TIMBERWOLVES: The A-Rod era will begin next season, and keeping Karl-Anthony Towns happy will be Project A, B and C. One of the league’s best people and best players, he has been in the NBA for six years after being the No. 1 overall pick of the 2015 draft, and he has a nice running mate now in Anthony Edwards along with his buddy, D’Angelo Russell. Ricky Rubio, entering the final season of a contract that will pay him $17.8 million, seems superfluous and could be moved if a pick was coming back in return. The Wolves’ pick in this year's draft will go to Golden State unless it is top-3, in which case Minnesota's 2022 pick becomes unprotected and will go to the Warriors. Chris Finch will have a training camp for the first time to work with whatever the roster looks like, and help will not come through free agency, as the Wolves are projected to be over the cap.

TORONTO RAPTORS: The future of team president Masai Ujiri seems very much up in the air. He is the director of Basketball Without Borders, and ESPN’s Adrian Wojnarowski has suggested Ujiri will look elsewhere for his next job and hand the reins over to general manager Bobby Webster. The Raptors get a pass for their failure of a season because they had to relocate to Tampa, Fla., which meant that they basically played 72 road games when not working on their tans and fighting off mosquitoes and alligators. Webster/Ujiri will likely look at all possible sign-and-trade scenarios for Kyle Lowry, who may feel it is time to move on. Decisions must be made on the non-guaranteed contracts of Rodney Hood, Aron Baynes, Chris Boucher, DeAndre' Bembry, Paul Watson Jr., Yuta Watanabe and Freddie Gillespie. If all are declined, the Raps would have about $30 million in cap space to play with.

SACRAMENTO KINGS: It would not be surprising to see the Kings lose Richaun Holmes, who has turned into a terrific NBA player and may want to play in a bigger market for a franchise that has not grown as accustomed to bad seasons as the Kings have. They have not won a playoff series since 2003-04 and have not played a playoff game since 2005-06. Does Vivek Ranadive keep head coach Luke Walton around? De'Aaron Fox, Harrison Barnes and Buddy Hield account for more than $70 million of next season’s payroll, and Marvin Bagley III adds an additional $11.3 million. General manager Monte McNair came up under Daryl Morey in Houston, so he has seen proactive roster turnovers when the situation called for it. What is in question is whether Bagley or Hield could bring anything of value in return on the trade market because both have not lived up to expectations. They seem likely to appear in a similar column approximately one year from now.

CHICAGO BULLS: The Bulls made so many deals at the deadline and did not have enough acclimation time following March 25. Getting Nikola Vucevic at such a small cost was a coup for executive vice president of basketball operations Arturas Karnisovas in his first season. Now he must decide on non-guarantees for Thaddeus Young ($14.1 million) and Tomas Satoransky ($10 million), and the franchise should expect to see Al-Farouq Aminu exercise his player option and thereby remain on the roster with a salary of $10.1 million. Lauri Markkanen should receive his qualifying offer of $9.026 million, and perhaps the biggest question is whether this team will stick with Coby White as the point guard of the future or try to find a way to get a player such as Kyle Lowry to be their primary playmaker.

NEW ORLEANS PELICANS: All in all, it was not a good season for David Griffin, Stan Van Gundy, Zion Williamson or Brandon Ingram after the previous campaign ended with so much promise. The JJ Redick episode did not make anyone happy. The season ended with four-consecutive losses and Ls in six of the final eight games, a $50,000 fine for Griffin for complaining that Williamson’s broken finger was the result of rough treatment of the former overall No. 1 pick that was being overlooked by the referees. Not one single player appeared in all 72 games – although Eric Bledsoe came up closest with 71. James Johnson and Willy Hernangomez are the only unrestricted free agents of note, and Lonzo Ball will be a restricted free agent who could solve some roster problems through a sign-and-trade. Griffin will have three extra second-round picks, and next year he gets the Lakers’ pick unprotected.