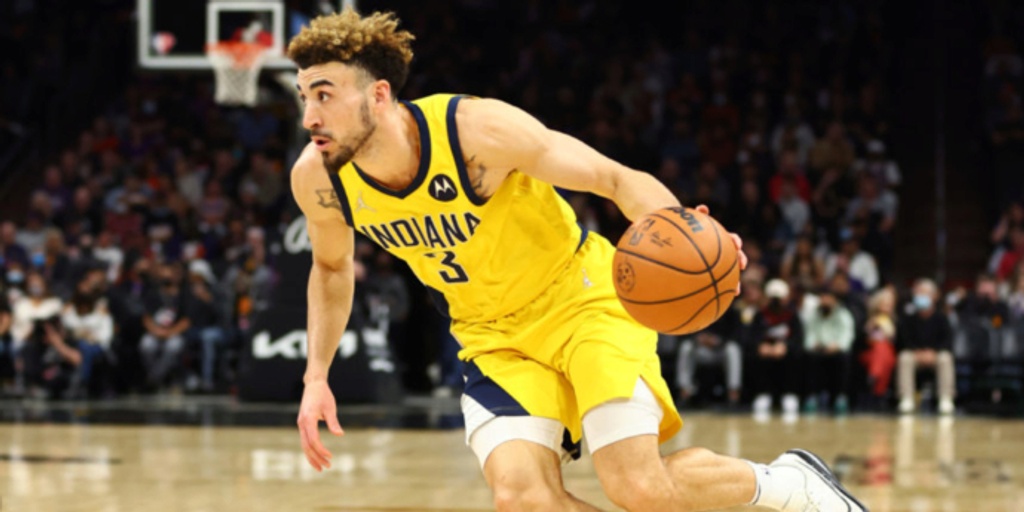 Chris Duarte and the case for drafting older players

Since the dawn of modern draft philosophy, NBA front offices have generally prioritized the untapped potential of younger prospects over the more apparent ceiling of an upperclassmen.

However, for every theory, there exists exceptions, and the league has fielded its fair share of outliers since the rise of the one-and-done era. Guys like Draymond Green, CJ McCollum, Jimmy Butler and — most recently, Desmond Bane — have massively outperformed their respective expectations and helped shed the stigma that comes with being an “older” draftee.

Enter Chris Duarte. The 24-year-old rookie has had an unconventional journey into the NBA, but now that he has arrived, he has proven to be one of the better players in a stacked 2021 class.

So is he the next link in the chain of draft anomalies?

To find out, let’s take a deep dive into the film to see what gives the Former Pac-12 Player of the Year a chance to be a high-level pro for a very long time.

Upon being selected with the No. 13 overall pick in the 2021 NBA Draft, Duarte was dubbed by ESPN's Jay Bilas as “a poor man’s Klay Thompson.” And while he’s right to some degree — Duarte’s 35.5% from beyond the arc is mincemeat to one of the greatest shooters that ever lived — he's mostly missing the mark on offense because Duarte's versatility as a scorer is an entirely different tax bracket.

This season, Duarte has been unassisted on 51.7% of his twos and 22.1% of his threes, a healthy margin above Thompon’s highest marks (44.4% and 9.2% respectively, per Basketball-Reference). Duarte’s volume on unassisted shots is in part due to the injuries of lead guards like Malcolm Brogdon and T.J. McConnell, but it also speaks volumes about his juice as an on-ball scorer.

Not a supreme athlete or ball-handling maestro, much of Duarte’s chops off-the-dribble can be attributed to his advanced footwork, which Indy Cornrows writer Caitlin Cooper (great Twitter follow) raved about during her December appearance on The Dunker Spot:

“I love his footwork. It’s so good. Like, the Pacers don’t have other guys that can shoot off of a hedge or off of a switch [to] that type of degree.”

And she’s one-hundred percent on the money. Duarte’s gracefulness adds another dimension to his game and the Indiana offense. Just look at this clip from a film thread Cooper did on a Duarte game in January, where he buries a nasty mid-range jumper with none other than Klay staring at him from under the basket:

2) Reverse pivoting out of a probe dribble without losing any balance or control on his jump shot. pic.twitter.com/h4tRTzYUFF

Overall, his ability to act as an on-ball/off-ball hybrid offensively enables him to handle a relatively high scoring load (fourth in usage and sixth in points per possession among rookies) while also maintaining solid efficiency (No. 6 in efficiency among rookies).

One development many of us didn’t see coming (myself included) is Duarte’s effectiveness as a part-time playmaker. He’s in the 55th percentile among pick and roll ball-handlers primarily because of his ability to navigate the floor and pinpoint the optimal play available.

In the next trio of clips, Duarte identifies two weak-side corner skips and one laydown dump-off at the rim (passes even Dejounte Murray himself struggles consistently making):

Now granted, he still has plenty of hiccups when saddled into the head creator role (evidenced by his 31st percentile turnover percentage). But the flashes he shows are exciting, particularly when factored in with his promising profile as a scorer.

When scouting perimeter players on defense, you normally want to ask yourself three questions:

1) Are they staunch at the point of attack?

2) Can they guard multiple positions?

3) Do they create events on defense?

For the first two questions, I’d probably lean towards "No." Duarte is solid at the point of attack, but he can’t really keep up with intense speed or overwhelming strength. And his versatility on that end of the floor grades second-last out of the 43 “wing stoppers” with at least 600 minutes (per BBall Index).

Where he does shine, though, is in his penchant for taking the ball away from the opposition. So far this year, his nearly 2% steal rate places him in the 72nd percentile at his position (per Cleaning the Glass).

His playmaking as a defender also exemplifies arguably the most important part of his long-term defensive value: team defense.

This is highly anecdotal, but when I went back and dove into the tape on Duarte, it seemed like every game, there was at least one instance where he’d make a play that compelled the opposing team’s broadcast to say something like “right place, right time, Chris Duarte.”

(Side note: Always watch the opposing team’s broadcast of the player you’re studying, unless you’re scouting a Charlotte Hornets player.)

What these commentators are trying to convey when they use that overworked sports cliche is Duarte’s knack for providing help at the nail, executing the one-pass closeout, zoning up two defenders on the weak side and intercepting passes for an electrifying pick-six.

The Pacers' defense is abysmal, but it improves by 4.5 points per 100 possessions when Duarte’s on the court (81st percentile) because of his instinctual play on that end of the floor. (Seriously, follow Caitlin!)

I realize that, up to this point, I haven’t focused too heavily on Duarte’s shortcomings as a player, and it’s not due to a lack thereof. His playmaking is fun, but spotty. He lacks the necessary burst/verticality to be an elite rim finisher (34th percentile), and his defense will always be solid — just never mega-impactful for the reasons highlighted earlier.

With that said, I’ve strayed away from harping on his limitations because those aren’t the reasons you draft a player like Duarte in the first place. In fact, a lower-potential ceiling comes with the territory. You select prospects like him for the certainty they provide. The certainty of having someone who can enhance high-usage offensive stars by effectively playing off them while also never compromising the defense thanks to a propensity for schematic punctuality.

Players like that start meaningful games on championship teams. And if Duarte can manage that, he makes one hell of an argument for why you should draft older players.