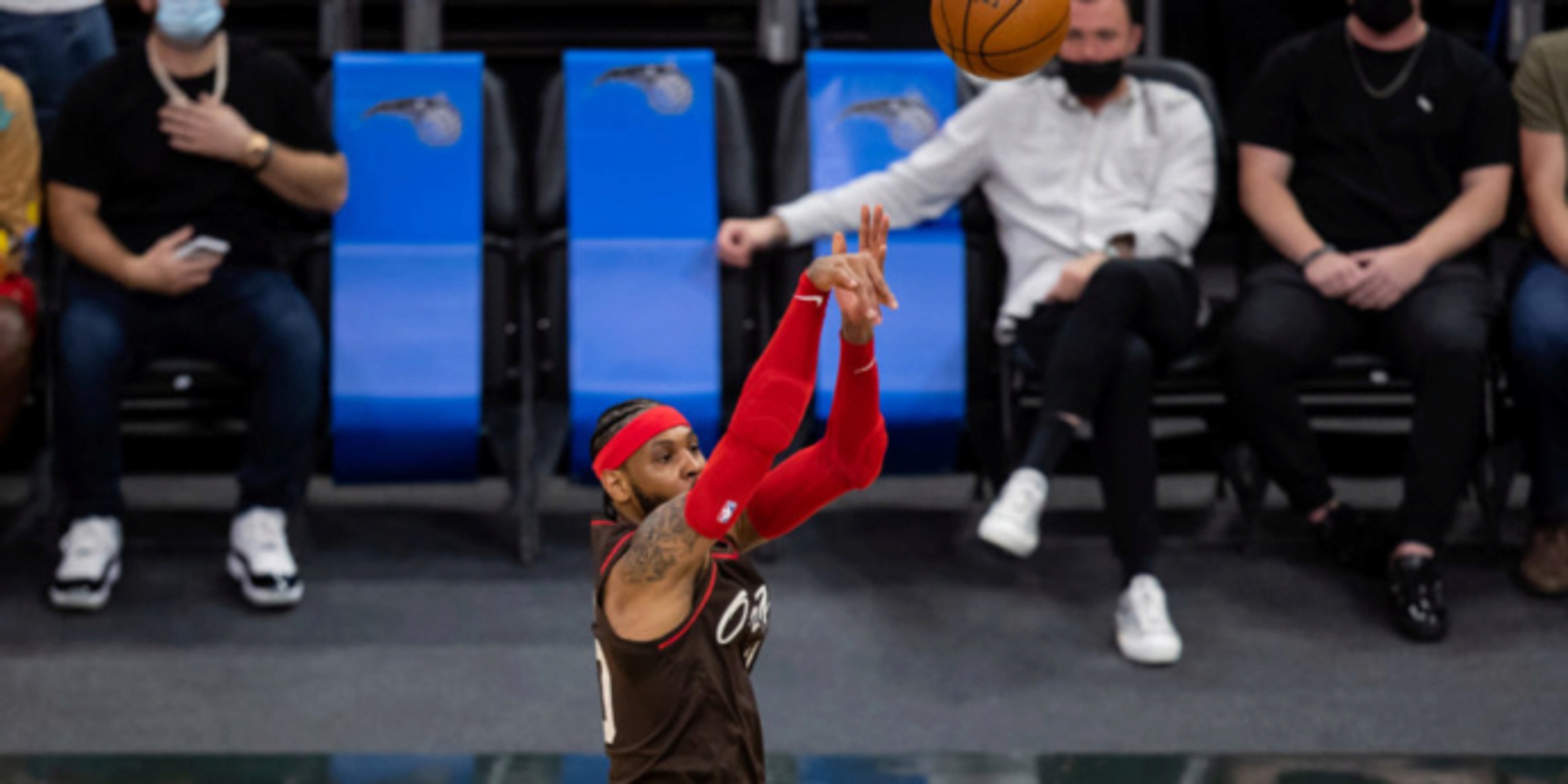 Carmelo Anthony moves up to No. 10 on NBA's all-time scoring list

Carmelo Anthony moved up to 10th on the NBA's all-time scoring list during Portland's game against the Atlanta Hawks on Monday night. Anthony moved past Hall of Famer Elvin Hayes (27,313 points) to crack the NBA's top 10 all-time scorers. Anthony also has a real chance to pass Moses Malone, who is ninth on the list with 27,409 points, before the season comes to a close.

Before Anthony signed with Portland, many people suggested he just hang 'em up and call it a career. But Carmelo has now cemented himself as a pivotal part of the Blazers' rotation in his second season with the team.

To read more on Carmelo and his success with the Blazers, Kenyon Martin of BasketballNews.com recently outlined why it's worked for 'Melo in Portland.

Here is the bucket that moved Anthony past Hayes:

4-point play for Melo moves him into 10th in all-time scoring! 👏 pic.twitter.com/vsF1scCy42

Here is the Associated Press' article on Melo's incredible accomplishment:

ATLANTA (AP) — Carmelo Anthony looked like he was all done just a couple of seasons ago.

Now, he's part of a truly exclusive club in the NBA.

Anthony scored 14 points Monday night in Portland's 123-114 loss to the Atlanta Hawks, moving him past Elvin Hayes for 10th place on the career scoring list with 27,318.

“If you’re in the top 10 of anything of all time, it’s a special moment,” said Anthony, who's in his 18th NBA season and turns 37 before the month is out.

Anthony cruised past Hayes early in the second quarter, hitting a 3-pointer while getting fouled by Danilo Gallinari and knocking down the free throw to complete a four-point play.

Anthony was fully aware of how many points he needed to surpass Hayes.

It appeared Anthony was headed for a forced retirement after he played just 10 games during the 2018-19 season.

He parted ways with Houston, was waived by Chicago and didn't hook up with Portland until the next season was several weeks old.

Even though he went more than a year without playing a game, Anthony found new life and a new role with the Trail Blazers.

A starter his entire career, he's now coming off the bench, playing a supporting role to younger stars, players who still look up to him, such as Damian Lillard.

“Being in the top 10 in a really special accomplishment,” Lillard said. “For him, it's probably a little more special. A lot of people counted him out and tried to finish him.”

During his time with the Trail Blazers, Anthony has passed nine players on the career scoring list.

Melo's got a good chance at catching him, too, by the end of the regular season.

“For Melo to be out a year and come back makes it even more remarkable,” Portland coach Terry Stotts said. “I always appreciate greatness, whether it's a player I'm coaching or coaching against. Melo is a great player. He's a Hall of Fame player.”

Lillard went on and on about what a pleasure it's been to have Anthony as a teammate, disputing those who have described him over the years as a selfish player who was never quite good enough to lead his teams — most notably, Denver and New York — to a championship.

Afterward, Stotts presented Anthony with a game ball in the locker room.

“We need to acknowledge milestones,” the coach said. “This is a big one. Top 10 of all time. That's big time.”

After his teammates finished clapping, Anthony said, "A couple of years ago, I didn't think I was gonna be in this moment right now. I was out the league for whatever reason. I’m back. I persevered. I stayed strong, I stayed true to myself and now I’m here in the top 10.”

He's not done yet.