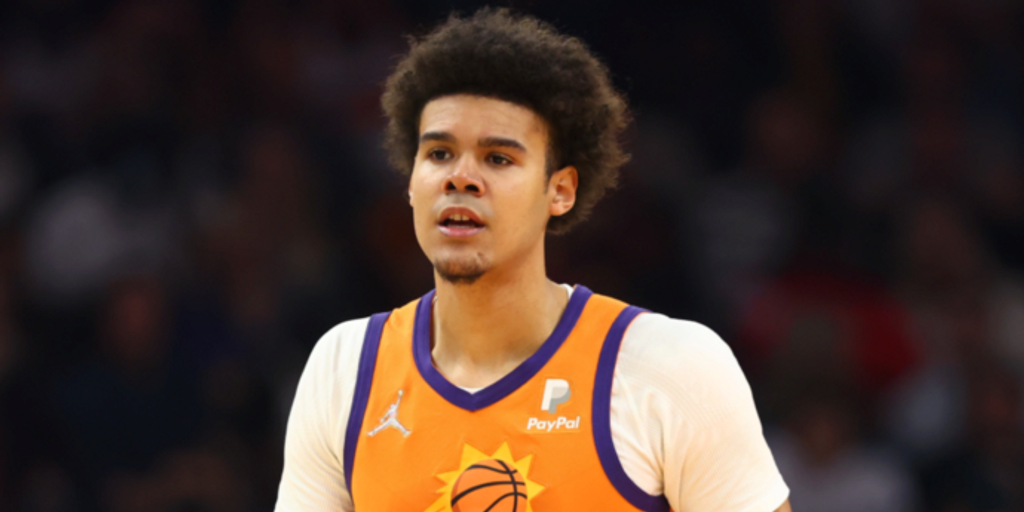 Cam Johnson, the art of staying solid and the Suns' stability

The Phoenix Suns are 49-12, hold the best Net Rating in the NBA (plus-8.6) and boast a top-three offense and defense (per Cleaning the Glass). They have a six-and-a-half game lead on the No. 2 seed Warriors and a seven-game lead on the fast-approaching Memphis Grizzlies — the second- and third-best teams in the NBA by record.

Chris Paul (get well soon) continues to orchestrate high-level offense like few have in the history of the league. Devin Booker is in the midst of perhaps his most complete season as a pro (this is Year 7?!).

Mikal Bridges is en route to an All-Defense nod, some dark-horse Defensive Player of the Year buzz and has made real strides as a scorer in 2022. In spite of contract weirdness in the offseason, Deandre Ayton continues on as a pillar of efficiency, a king of quick 10-footers and the central figure in Phoenix's defensive construct.

This team has the juice and a special air about them, arguably even more so than the charmed team that made the Finals last summer.

I've seen Star Wars Episode III at least 30 times in my life (it came out on my ninth birthday and has been a staple ever since; sue me). There's something extremely grounding and soothing about that movie for me that I don't find replicated often in media. I feel the same bewilderment and joy watching the Battle of Coruscant unfold every darn time, like I'm still that awestruck kid at Regal Cinema 15 years ago. Order 66 still breaks me each rewatch, we don't need to talk about it!

The Suns are my NBA comfort watch, much like that film. If I've gone through a particularly grimey stretch of Indiana Pacers play, I can flip on the Suns on League Pass once the West Coast tip-off starts and bask in the ambiance of fantastic basketball.

The offensive sets flow and pop. Defensive rotations are crisp and timely. The consistent stability of Phoenix draws me in, and it's third-year forward Cam Johnson who is central to that stability.

Paul is going to slice up the court with nifty passing, and Booker will dazzle with his shot-making. But Johnson is the kind of player who, if you watch a team casually, might not pop... at least not in the way a star might.

Yet, that quietness is what makes Johnson such an integral player. Once you get in tune with the Suns, the silence is audible when he's not on the court.

At its core, the term/archetype "3-and-D" loses the essence of what makes a player unique; Johnson's role certainly runs parallel.

He paints the corners, canning 48.0% of his attempts from the wings, per Cleaning the Glass (89th percentile).

Johnson is a legitimate shooter off of movement, and his gravitational pull is acknowledged in full by defenses; he rates in the bottom third of Basketball Index's openness-rating metric, tracking how open a player's attempts are on average.

Out of players taking 3 or more threes per game this season, Johnson is fifth in the NBA in three-point percentage (43.2%). We know about the shooting, but it's the foundation of his game! It's what he was most marketed for as a prospect, but it unlocks the remainder of his offensive skill set in a way that the box score cannot encapsulate.

Johnson isn't an adept ball-handler, but he's competent for his size. Along with his tremendous perception of advantages and court awareness, he's able to knife into lanes that are made available to him. Give him a step on the catch, and he might not beat you to the rim, but he's going to keep the initial push of the offense going and flowing.

Since he's entered the starting lineup post All-Star Break with Paul out, he's doubled his assists per game (1.5 to 3.7), but that's more of a highlight of what he's always been capable of — just exacerbated with higher usage.

Attacking off the second side, he's phenomenal at driving east and west, hitting cutters or bigs in the dunker spot or floating in the paint with a dump-off or drop-off pass.

Johnson flows in and out of secondary ball-screens and handoffs if a primary action is denied. He often has to kill his dribble before he can get to the rim, but his quick actions and relocation buoy his lack of burst and keep the offense in equilibrium.

He's also pretty darn good as a post-entry passer, and has developed some nice chemistry with JaVale McGee, finding him routinely (Shout out to JaVale, what a season from him).

Johnson's even flashed some eye manipulation, toying with the defense in a way that I certainly wasn't ready for; the defense was not either!

It sounds simplistic, but a player like Johnson who thrives operating off of others is essential to sn offense. Being able to put the ball on the floor and make positive decisions while maintaining the defense's attention as a shooter eases up life to a degree for Booker and Paul.

When he does his job, it's not always noticeable, as mentioned above. When backups with different skill sets fill in, there's an "Oh, yeah, I get it now!" type of realization. (And that's not Torrey Craig or Ish Wainwright slander, but rather "Cam Johnson is awesome" praise!)

Johnson was really solid defensively last year, but it's felt as though he's taken smaller steps this season and grown into a more consistent positive.

Johnson won't often lock down opposing wings as well as Mikal Bridges does, but he excels in a team scheme. He's been better at the point of attack and man-to-man than anticipated pre-draft.

There were pre-draft lateral quickness concerns, but being big and knowing how to play big has made him into a plus defender pic.twitter.com/5L8mKc4oEJ

While he doesn't have a massive wingspan (6-foot-10), you will rarely see Johnson with his arms down. He's so good at keeping himself square and angling, riding out drives on a ball-handlers hip, keeping vertical and using his length to contest and crowd.

This possession is a microcosm of why I enjoy Johnson as a defender.

He fights through the screen fairly well for someone with his size and frame, but my favorite part is that he never loses contact with DeMar DeRozan. Tony Bradley doesn't fully set the screen for contact (it feels somewhere between a slip and a legit screen), but that would be enough to deter many point-of-attack defenders, creating some separation.

Johnson has a hand on DeRozan at all times, making it extremely difficult for DeRozan to both feel comfortable and step into one of his patented pull-up twos after snaking into space. Johnson simply doesn't provide that space by maintaining contact and always being in pursuit.

He works in tandem with McGee, shading DeRozan to the baseline before he pivots out and then posts up.

Is Johnson flat-out stopping DeRozan on the perimeter? No, but he's simply being solid and continually getting the most out of his tools. Staying solid is an art, and Johnson is the artist, with timely rotations, good communication (a Phoenix staple) and apt activity on switches.

While Kevin Love and Tyler Herro will rightfully garner most of the votes and consideration for Sixth Man of the Year, Cameron Johnson deserves a mention and a down-ballot nomination (even if he starts the remainder of the year, he'll meet criteria).

As he likely remains in a larger role with Paul out for the foreseeable future, enjoy the Cam Johnson experience, appreciate the little things he does that deserve highlighting,and soak in the rays of a great Suns team.