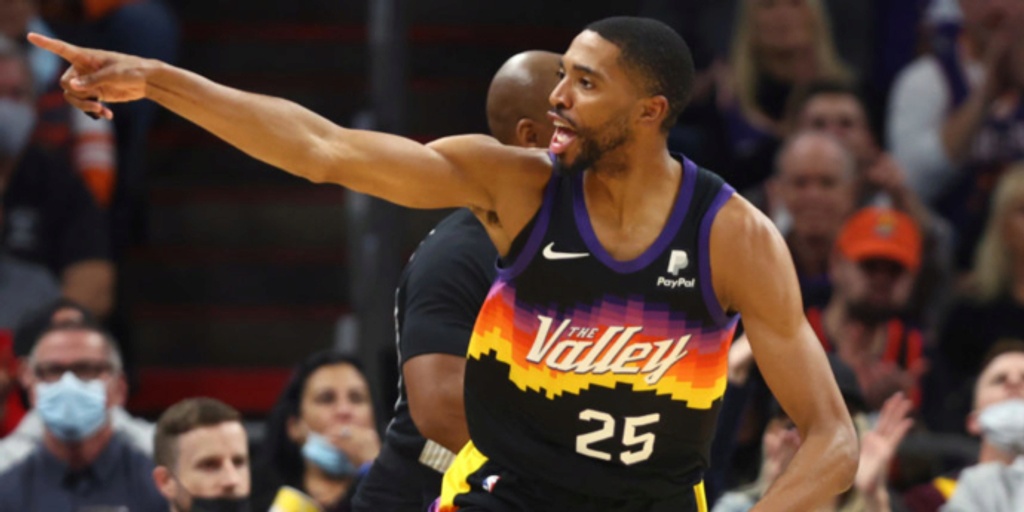 Mikal Bridges' leap offensively is vital for the Phoenix Suns

Midway through the third quarter of a February duel between the Phoenix Suns and Los Angeles Clippers, with the score knotted at 62, Deandre Ayton surveys his options from the top of the key.

His two primary ball-handlers, Chris Paul and Devin Booker, are stationed on opposite wings with their defenders close by. Feeding one of them the ball would require Ayton to enter the orbit of the Clippers' pesky, handsy forwards and risk a turnover.

Instead, Ayton turns his attention toward Mikal Bridges, who has the smaller, less defensively-inclined Reggie Jackson on him. The two connect for a dribble handoff. Bridges bounces two determined dribbles into the paint, pirouettes and buries a jumper over the 6-foot-3 Jackson.

It was one of Bridges’ 8 field goals on the evening en route to 19 points. A day later, he scored 17 in a win against the Houston Rockets.

Over his past 11 games, the fourth-year wing is logging 19.4 points on 70.6% True Shooting while averaging 12.5 field goal attempts per night. All of those marks are significant increases from the 12.3 points on 59.6% TS and 9.5 shots he averaged across his first 47 games this season. His free-throw rate has also skyrocketed from .126 to .268, which is an apt proxy for the difference in his amended scoring process.

Bridges is enjoying the most prolific offensive stretch of his career, both because he’s emerging more aggressive in seeking his shots and because that newfound aggression is paralleled by white-hot efficiency.

During this flurry, he’s shooting 94.1% at the rim (32 of 34) and 66.7% from mid-range (34 of 51), according to Cleaning The Glass. Neither of those clips is sustainable, but Phoenix doesn’t need him to be this good for his scoring development to be a difference-maker. Seizing three more shots per game and the manner in which he’s doing so are the most salient long-term storylines of this breakout.

He’s beginning to fully realize just how potent he can be in exploiting pockets of space on the floor. His mid-range touch, creativity as a finisher and 7-1 wingspan enable him to comfortably discover shots within a well-oiled offense that’s constantly forcing defenders to play catch up.

Recently, he’s been forcefully attacking off the catch and pressing the issue as a scorer more often. When he finds himself in a beneficial matchup, he’s not surrendering that advantage if an initial move doesn’t work.

Not only has Bridges earned a greater slice of the pie, but Phoenix is also putting him in more spots to thrive. Through 47 games this year, he's averaged 35 total touches, 2.4 paint touches and 1.5 elbow touches per game, according to NBA.com.

Over the past 11 outings, those numbers are up to 40.5, 3.7, and 2.5, respectively. Primarily through handoffs, Horns actions or pindowns, the Suns are emphasizing chances to send Bridges downhill, and he’s validating their credence.

Anecdotally, it also feels like they’re utilizing him more as an on-ball screener in half-court sets. He’s long linked up with Paul in early offense to slip screens and finish before the defense is organized. Lately, though, that action appears less confined to early offense environments.

Bridges is more loudly asserting himself, and doesn’t require a vacant runway to convert in the paint as much as he used to in these instances. Whether he’s expertly sealing off a switch as he rolls inside or further showcasing bubbling confidence as a scorer, his screening capabilities have certainly factored into the three-week heater.

Two of Bridges’ highest-scoring games amid this streak have included him getting busy in the post. He repeatedly torched Trae Young when he dropped 24 against the Atlanta Hawks on Feb. 3. Two days earlier, when he scored 27, targeting the Brooklyn Nets’ slew of limited defenders on the block was prominently featured.

He’s got a slick turnaround on lock, and Phoenix’s willingness to up the tempo this year (seventh in pace, 24th last season) sparks cross-matches in transition. And, again, he benefits from Paul and Booker drawing the stiffest of perimeter defenders, leaving him to punish ill-equipped options.

Bridges maintaining this retooled approach throughout Phoenix's presumably deep playoff run (get well soon, CP) is critical. During their four Finals losses last season, the Suns' Offensive Rating was 108.2 (114.3 in 18 postseason games before that), and they couldn’t keep up on either end.

Bridges participated in that inability. Mercurial offensive production helped define his first playoff appearance. In 22 total postseason games, he scored 13 or more points nine times, and 7 or fewer seven times. Steadiness is a hallmark of his services, but that wasn’t the case last postseason.

As the Bucks rattled off four straight wins to secure the title, Bridges averaged just 7.8 points on 5.3 shots. Record-scratches and diminished conviction plagued him, so much so that his minutes were cut at times too.

Bridges being someone whose 15-point games are the norm, not the outlier, can help amplify both the Chris Paul Era and post-Chris Paul Era in Phoenix. He, Booker and Ayton are all 25 or younger. Prosperity in The Valley will exist with and without Paul around.

How much prosperity depends, to some degree, on whether Bridges’ recent flashes of something more offensively are merely flashes or the start of a sustained rise.

There’s absolutely reason to believe it’s the latter. The process and the results are better. When those two coalesce, hope gives way to tangible evidence. And tangible evidence is central to Bridges’ February game film.

The rise is real. These next several months are his chance to confirm that.