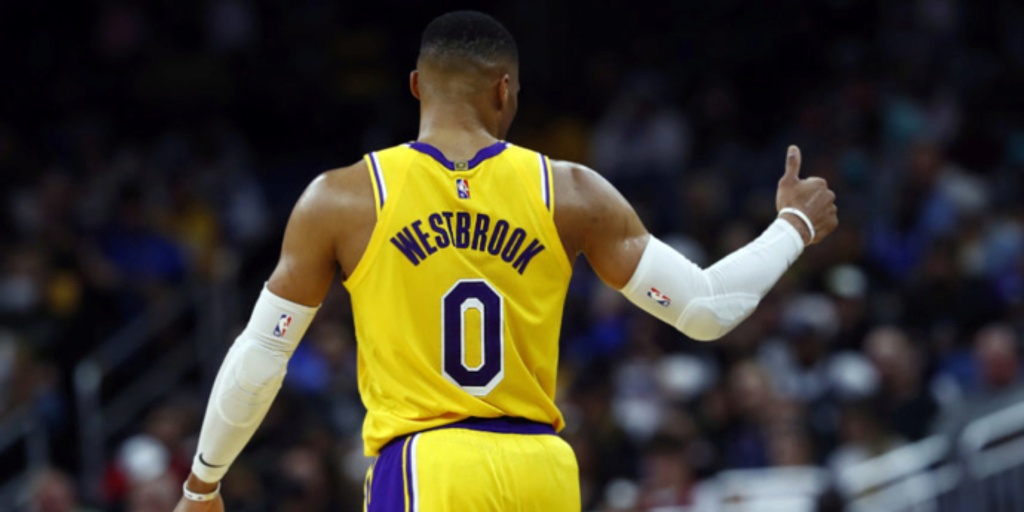 Call me crazy, but I still believe in the Westbrook-Lakers marriage

When I first heard that Russell Westbrook got traded to the Lakers, I’ll admit, I was surprised.

More than anything, I didn’t expect the Lakers to be able to work out the trade from a financial standpoint nor did I think they’d want to be so top-heavy and commit so much money to their top-three players. But they did.

What didn't surprise me was that the organization was willing to take the kind of risk they did by bringing Westbrook in.

They say where there’s a will, there’s a way, and that holds true on the basketball court. You can’t teach effort, but with Russ, you’d never have to. Everyone knows this, and so did the Lakers.

So it made sense in that regard.

Obviously, though, from a basketball standpoint, there were bound to be some growing pains. LeBron James needs the ball in his hands to be most effective, and so does Russ. But we once said the same thing about LeBron and Dwyane Wade in Miami.

The lesson there is if you have players who are motivated and willing to sacrifice, then everything can be figured out. Especially with LeBron and AD — they’re so talented and versatile that it was easy to believe that the three would be able to mesh.

And you know what?

I still feel that way, even if a lot of people don’t.

As the season has gone on, Westbrook has been getting a lot of attention, and his name has been getting dragged through the mud. He hasn’t been efficient, he’s been pressing and he’s looked at times like he’s lost a step. I’ve even seen one or two news stories and rumors saying that the Lakers are open to trading him.

While I do think it’s crazy that we’re still talking about the Lakers “figuring things out,” a lot of people have been unrealistic with their expectations. And that, I think, is the real story.

Aside from being from L.A. and going back home to play for the team he grew up watching (which comes with its own kind of pressure), Russ is now on a team with LeBron James. ‘Bron has high expectations of everyone around him, whether it be the coaching staff, his teammates or the equipment managers.

The biggest problem — and it’s something that a lot of players have been afraid of — is that everyone else expects a lot from you too. And if you don’t play up to a certain standard, you’re going to hear about it. Just ask Kevin Love.

The pro to playing with LeBron is that you know you have a good chance of making it to the Finals, if not winning it all. The con is that you live and play under a microscope. You’re scrutinized in a way you’ve never been before. It was like that in Cleveland, where I coached him, and the spotlight is a lot brighter in Los Angeles.

Going from an underdog in Oklahoma City to a sidekick in Houston to a non-contender in D.C… None of those experiences prepared Russ for the pressure he would face playing with someone like ‘Bron… and especially not in Russ’ hometown of all places.

Has it gotten to him a bit? Probably. But I guess I’m in the minority. I think Russ will find his way, and I also don’t think he’s to blame for all the Lakers’ problems.

Russ didn’t just start missing midrange shots or turning the ball over. That’s who he’s been for a long time; he just has to find his way with ‘Bron and AD. And that has become a challenge all by itself.

Believe it or not, the Lakers’ Big Three has only played 14 games together.

It’s easy to forget because LeBron has been so great this season, but he only played nine of the Lakers’ first 20 games. Then, shortly after he got up to speed, AD had some health issues of his own.

On Thursday night, AD played his fourth game since Dec. 10, and guess what? LeBron wasn’t even in uniform for that one. Knee soreness kept him out of the lineup and the Lakers fell to 24-25 after losing to the Philadelphia 76ers.

If you’re looking for an explanation for the Lakers struggling, it’s easy to point to Westbrook, but it’s not all on him. My advice to him would be simple: be yourself, but keep sight of what this team needs from you to succeed.

At the end of the day, you still want Westbrook to be Westbrook. He only knows how to play the way he’s been playing. But when he has other teammates who are as talented as him or more talented than him, he doesn’t need to play every possession as if he’s the only one who can score the basket or make the difference. Maybe it was like that in OKC, and maybe at times in Houston and D.C… But that’s not the case now.

But the other parts… The lack of chemistry with ‘Bron and AD and the expectations that seem to be getting in his head a bit… Those are factors in his struggles, as well, and they’re not entirely his fault. Not after only 14 games, anyway.

Fortunately for the Lakers, there’s a lot of season left. And veteran teams that think they’re gonna be there in the end, they typically use the first half of the season as a trial period. When you have a team that has a “championship-or-bust” mentality, the main goal is to be healthy and be playing their best basketball after the All-Star break and heading into the playoffs.

At one game under .500, the Lakers obviously want to be better… But they shouldn’t be counted out.

And honestly, neither should Westbrook’s ability to be a positive difference-maker for them.