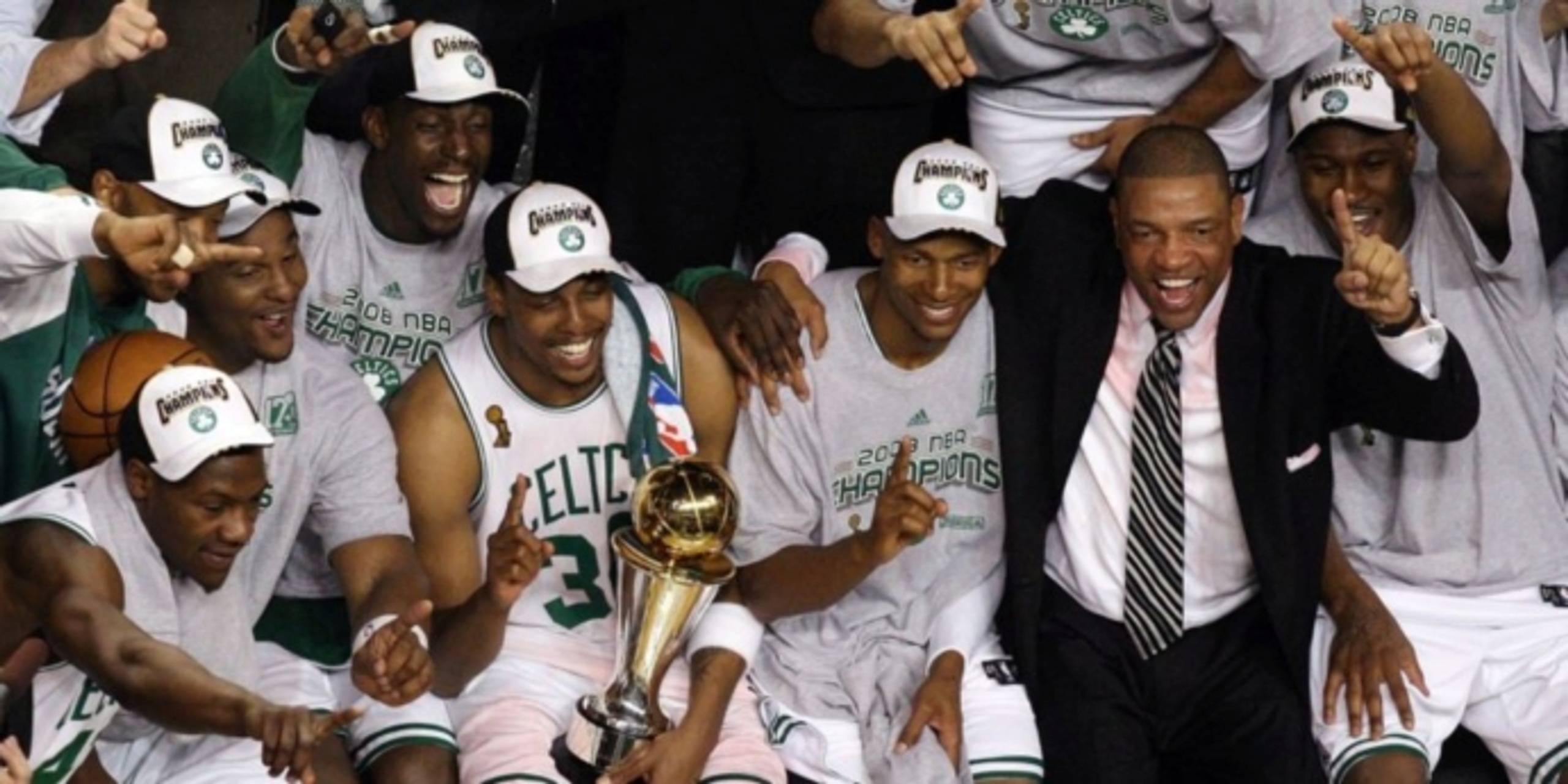 Championship or bust: Here's what it takes to win an NBA title

Coming into an NBA season as the favorite to win it all isn't easy. Not only is there a target on your back, there's a ton of pressure on the team to live up to the championship-or-bust expectations.

When I got to the Boston Celtics in 2007, all eyes were on us. Every night. Off the rip, once all those moves were made and the Big Three was assembled, we knew we had a great chance at a title. There was that little window for KG, Ray Allen and Paul Pierce — it was their time to do it. You felt it. The time was now. We knew what we were in for that season.

We all heard the talk. People were picking us to win it all and labeling us the favorite.

Behind the scenes, everybody was trying to get a story. Big-time media, local media, people that you’ve never seen in the building before — they’re all trying to get something. They’re waiting for somebody to say the wrong thing, so they can blow it out of proportion. You have to keep that in mind and be careful what you say, especially if you're a young player or someone who hasn't done many interviews.

As a team, you can't let the headlines and manufactured drama distract from the ultimate goal, and that's where having great leaders is really important.

That year, the expectations were just... different. Everyone wanted to know how we were gonna go out and perform. We started the season 8-0 and by early January, we were 29-3. We were dominating on the floor. The Big Three was the main attraction across the league. They were discussing our team on TV, on the radio and in the newspapers. We were under the microscope. I wasn’t getting interviewed a lot, but every day, KG, Paul and Ray would get annoyed by the media. They’d be like, “Yo man, is that the best question you could come up with? You’re wasting our time. I could be at home already.”

Remember, we were doing this in Boston, which only added to the craziness. There's a lot of pressure to win in that city because of the tradition of the Celtics, Patriots, Bruins and Red Sox. They’re just used to championships. The Pats won the Super Bowl in 2001, 2003 and 2004, and the Red Sox won the World Series in 2004 and 2007. I remember thinking, “Damn! We really gotta win now. We can’t be the only ones who aren't winning.” At home games, the fans did their part and gave us an extra advantage.

Because we were the frontrunner to win it all, we had a target on our back all year. Teams came in and badly wanted to beat us. It was extra meaningful; for some teams, that game was their championship. 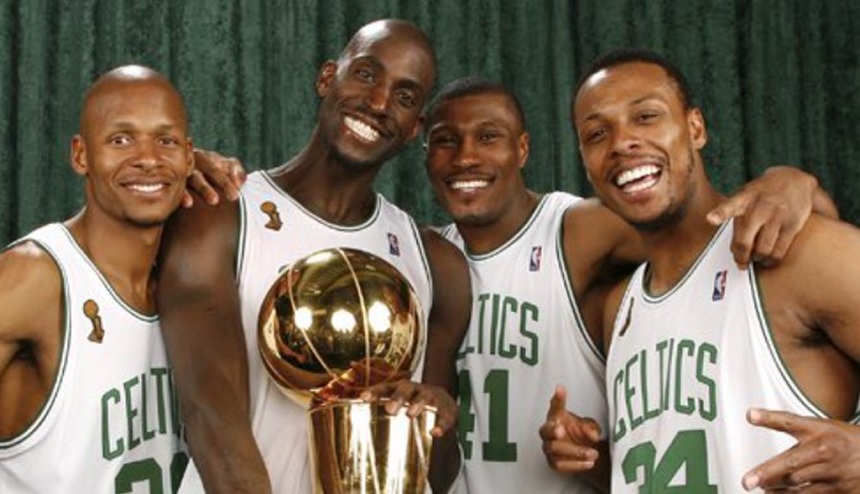 But we had great leadership on that team. Doc Rivers had a message for us: "If we want to go all the way, you can’t get bored or tired of the process." At the time, I was the only one who had won a ‘chip, so I echoed that message, too. We had to worry about our own business and control what we could control. And Paul, Ray and KG, they were all ears. Since that message was delivered, they stepped up and led the way as far as how we prepared. The practices were different. The competition level was different. They just raised the level for our whole team. Our eyes were on the big picture. There were certain points of the season where I said, “Man, we really do have a chance to do this.”

One of those points was our road trip through Texas, when swept the Dallas Mavericks, Houston Rockets and San Antonio Spurs. When that happened, I felt like we had a damn good chance to win it all. We just had that focus, that leadership.

And once we made it to the 2008 NBA Finals, now we had to win. We knew we couldn't come up short. Fortunately, we managed to beat the Los Angeles Lakers in six games, bringing the Larry O'Brien trophy back to Boston. When we won, it was almost a sigh of relief.

When I won my third ring with the Cleveland Cavaliers in 2016, it was a slightly different story.

LeBron James came back to the city in 2014, and it was my first year as an assistant coach with the Cavs (after working with their G League affiliate). In 2014-15, we had a Euroleague champion in David Blatt coming in from overseas as a first-time NBA head coach. We all had to get on the same page fast. He did a good job, but we came up short that first year.

In 2015-16, our team had to win. Even with a winning record, Blatt was let go that winter and Ty Lue got the head coaching job. But this was on ‘Bron’s shoulders. When you have the best player in the league, every station you turn to on TV, he’s gonna be on there and his team’s gonna be on there. It’s a circus, but it’s a good circus. Wherever ‘Bron goes, he wins. Wherever he goes, the media follows. They wanna be able to say they covered the team, even before the wins start coming, just to say they did it. 'Bron expects to contend every year, which creates those championship expectations.

T-Lue did a great job with our team. Being a former player, he’d been there and done that. He was a champion, and as a coach, he kept everybody engaged. He led us the right way. He knew the process. It was only a matter of keeping guys who had never won from getting distracted. He did it by instilling confidence in Kyrie and K-Love. If you look at those two and what they had done in their careers, the spotlight was on them ‘cause they were in a better situation to win now. They’d have a good game, then they’d have a bad game and now the media’s on them.

Lucky for us, ‘Bron didn’t let any of that negativity affect him or the team. He took all that attention and accepted it. He and T-Lue really stayed calm and took everything on. Shit, I remember when we were down and going back to Golden State, trailing 3-1 in the NBA Finals. We were like, "We okay. We just gotta do what we need to do to win one game. One game at a time." We never wavered.

We had great games from ‘Bron, Kyrie and K-Love, and T-Lue was doing his thing. To come back and do it the way we did it... it just shows that we did it together. In Game 7, we had the Block, the Shot and K-Love’s defense on Steph Curry down the stretch. Those moments made it even more special for us. And ‘Bron showed his maturity and made sure everything stayed intact as that mega-superstar. Him being the great power that he is, he was able to get it done in Cleveland. 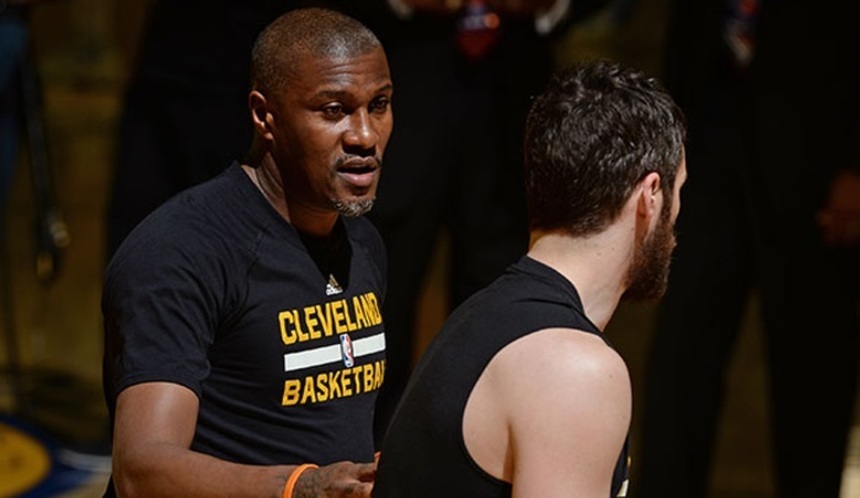 When I won my first championship with the Miami Heat, we didn’t even have crazy outside expectations, but we did have Pat Riley and Shaquille O’Neal. You listen extra hard to proven guys like them. You don’t want to mess anything up or be the reason they lost.

There were a lot of moving pieces that year, so we had to accept our own roles and jell in order to play well together. Early on, we were a little shaky. Then, we had a losing streak. At that point, Stan Van Gundy got fired and Pat came down to be our head coach, so that turned up the heat a lot. It was my first rodeo. The talent was there, but I just wasn’t sure if we could win the title because we weren’t clicking.

The outside perception was, "Okay, well they’re an old team anyway." Nobody was really talking about us as a possible championship team except for Pat and Shaq because they had experience with it. Even after Riles came down, it was no sure thing.

However, we got hot at the right time and we were able to advance to the NBA Finals. Even though we hadn't been talked about as a top contender, we were suddenly the main attraction. We were facing Dirk Nowitzki and the Dallas Mavericks, who had won 60 games that season.

Dallas won Game 1 and Game 2 of the series, and people were talking about a possible sweep. But we leaned on Shaq and Riles for confidence and leadership, and they kept stressing that we just had to win the next game. We ended up winning four-straight!

That one was special — not only was it my first championship, it was also the Heat's first-ever title.

Riles did a good job of managing us at the time, preparing us for the distractions. It’s those little things that put doubt in your head; you gotta put your headphones on and not pay attention to any of the noise.

There are more distractions these days than when I was playing. We had the newspaper and ESPN, but it was easier to block that stuff out because you could just put down the paper or turn off the TV. Today, social media can be brutal. You can see everything now. And many of today's players spend a lot of time on their phone, so they aren't blocking that stuff out. When they're not with the team, they're at the crib, and they're probably on that phone.

If you’re not mentally strong enough and you listen to the noise — whether it's praises or disses — that can be tough. You don’t wanna get too high or too low. You gotta find that medium where you can push forward, keep your eye on the prize and not let it bog you down. It really takes a mindset of knowing when it’s too much and when to stay away from it for a little bit.

‘Bron calls it Zero Dark Thirty-23. Once you get to the playoffs, you black everything out and lock in. His dedication to doing that shows how important each championship is to him. In Cleveland, he was willing to sacrifice and commit in order to make that championship run happen. And that approach was contagious, showing the value of championship experience and having veterans who have been there before. Not everybody has that mindset though, and they’ll stay on social media and get distracted when they shouldn’t be on there at all.

Somebody asked me what advice I’d give to a team with championship expectations. Every situation is a bit different, but you gotta have a mentally strong group and great leaders to weather that storm. When you have championship-or-bust expectations, there's a ton of pressure and a circus-like environment. The more experience your team has, the better you'll fare. And everyone needs to stay focused and understand what's going to be asked of them.

Do all of that, and maybe you'll be able to start a ring collection of your own.