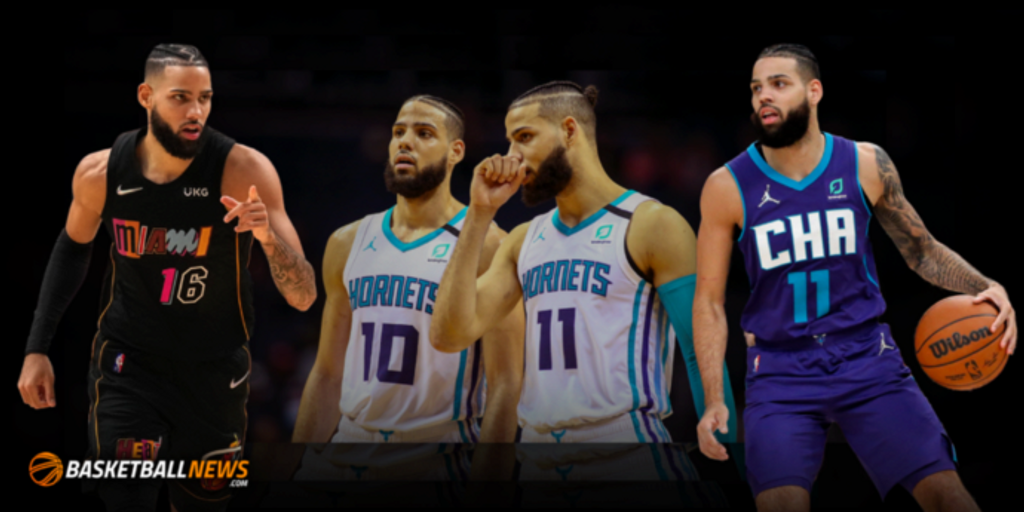 Growing apart together: Caleb and Cody Martin flourishing on their own

For the first time in their lives, twin brothers and NBA pros Caleb and Cody Martin are going to play against each other in a regular-season game. And while they're ecstatic for one another, they're both coming for bragging rights and the win this Saturday night in Charlotte.

"My brother [Caleb] is gonna be amped, but at the same time it's like, he approaches the game like he's playing me every game," Cody told BasketballNews.com over the phone.

Caleb is excited to return to Charlotte, back where his NBA career began and where he grew up.

"Getting to be back home and play where it all started will be fun," Caleb told BasketballNews.com. "To get play against all the others that were on my past team. There's always bragging rights... and getting to leave with the dub."

The Martins have been playing and practicing against one another their whole lives, even when they played on the same team. They've constantly driven each other and motivated each other. 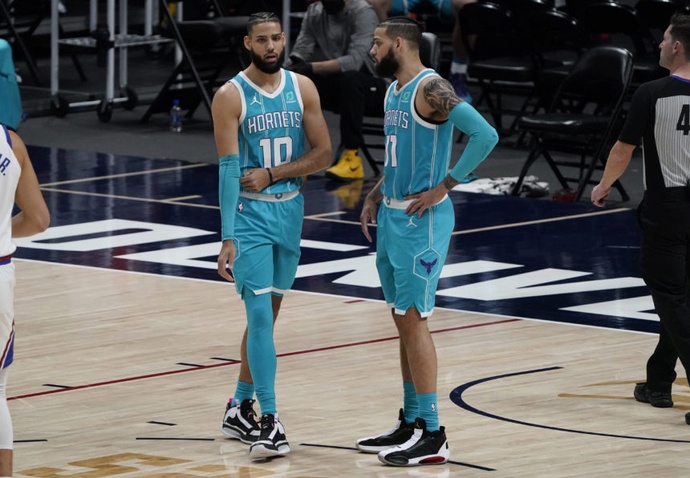 In fact, Caleb and Cody have always been together.

Whether it be basketball, fishing, grabbing a bite to eat or working at their local Walmart in Mocksville, North Carolina as cart pushers growing up, you'd find the pair together.

From Davie County High School, to a senior year at prep powerhouse Oak Hill Academy, two seasons at North Carolina State and transferring to the University of Nevada — together.

They played a significant part in back-to-back NCAA Tournament appearances, including a 2017-18 run to the Sweet 16, the Wolf Pack's deepest run since 2004. Both made All-Mountain West Conference squads each season and were heavily decorated, with Cody winning MWC Defensive Player of the Year and Caleb winning MWC Player of the Year.

Graduation and the NBA Draft brought the reality of separation to the forefront.

Cody would hear his named called on draft night, with the Charlotte Hornets taking him with the 36th pick on June 20, 2019, while his brother didn't hear his name called. However, Caleb would later sign an Exhibit 10 with the Hornets a month after, eventually earning a converted two-way contract and ultimately upgrading to a standard multi-year deal. Both factored in heavily in the Hornets' rotation by the end of their rookie season after spending time in the G-League with the Greensboro Swarm, further cementing themselves the following year.

But, in the 2021 offseason, Charlotte waived Caleb.

Caleb had prepared himself heading into the summer knowing it was a possibility, but mentioned it still caught him by surprise.

"It was just very eye-opening, in terms of just putting yourself in perspective to say, 'Alright well I haven't done enough, guys don't believe that you're an NBA player.' I think a lot of that was emphasized whenever I didn't get picked up off waivers," Caleb said.

He signed a two-way deal with the Miami Heat a month-and-a-half later, focused on proving himself and showing he belonged in the league.

"The Heat gave [Caleb] an opportunity and I don't think he's looked back since... his mindset, what he brings to them and the dynamic he brings to them, and just how hard he works. That's the culture there. So, I think he's fitting right in." Cody said.

And fit right in Caleb has, securing a high-leverage spot in the rotation for a team that's tangoed with the top seed in the Eastern Conference. He's put together career-highs across the board with respect to production and efficiency; that includes a renewed focus on the defensive end, as he's boasting his highest ratings in Defensive-Estimated Plus-Minus — emphasized by crisp rotations and honed-in tenacity.

He's played a significant part in the surprising emergence of Miami's bench unit, comprised mainly of undrafted and two-way players. The fourth most-played lineup by the Heat this season per Cleaning the Glass is an all-bench group of Gabe Vincent, Tyler Herro, Max Strus, Caleb Martin and Dewayne Dedmon. The group has been remarkably effective (plus-6.2 point differential), and played a key part in the Heat rallying back in the fourth quarter to take the Toronto Raptors to overtime in a recent game. (Editor's Note: It took three extra OTs to decide that contest, with the Raptors outlasting Miami 124-120.)

It's not often that a full, five-man bench lineup will play, let alone have a positive impact. Mostly coming from similar backgrounds (being undrafted) has factored into their ability to play together.

"I think a lot of that has to do with mentality man, the fact that we want each other to win so bad," Caleb said of the unit's success."

Many will and have looked at Caleb and Cody side by side and struggled to tell the difference. Often on opposing broadcasts in prior years, there'd be confusion over which brother was which when they were in game. But make no mistake: They're fraternal twins and will be the first to tell you.

"We've been trying to tell people, you know, we look the same, we do a lot of the same stuff, and we're together all the time, but our games are totally different. It's night and day." said Cody.

That's perhaps been the beauty of this season. Finally apart, each brother's game has blossomed, and as Cody mentioned, they're quite different. They bring a similar energy and hustle to the court that "might rub you the wrong way," as Cody made light of a recent event with Russell Westbrook when Charlotte played the Los Angeles Lakers. (He'd block Westbrook's lay-up attempt into the abyss about a minute later.)

Caleb has fashioned himself into a top-notch slasher, taking advantage of hard closeouts and attacking the rim with authority, where he converts at a high rate (70% per Cleaning the Glass) and has put opposing shot-blockers on notice.

(Caleb's favorite dunk is the first one.)

Meanwhile, Cody has flashed his ball-handling and playmaking chops more than ever at the NBA level due to defenses respecting his shooting, providing him driving lanes he didn't routinely garner his first two seasons.

If you've watched closely their whole careers, that dynamic has been there between them throughout — Caleb often leading their teams in scoring and shooting at a high clip, with Cody facilitating and filling in the gaps.

"It's kind of like refreshing too, that (playing apart) allows him to be him and that allowed me to be me," Cody said.

Both brothers spoke on the oddity of being apart on the court, but off the court has been an entirely different transition.

"The house is way more quiet," said Cody, who had lived with Caleb during his two years in Charlotte. "The transition has been not as bad as I thought it was gonna be just in terms of like, how different it would be. Because you're so busy, and you're on the road all the time."

Caleb emphatically remarked how much he loved living with his brother, and that it was an awkward adjustment at first, but "it's been cool to get to just be yourself." It really hit him one of the first times he went to get food by himself.

Despite being the furthest apart in their lives, the brothers' relationship is as strong as ever. They FaceTime every night and play video games with each other constantly in their off time, especially Call of Duty.

Do the Martins keep up with one another's play? Follow each other's stats and production?

"Oh yeah, man. Yeah every game, every game," promptly said Caleb, who was preparing to watch Cody and the Hornets take on the L.A. Clippers in a matinee before his flight out of Miami last Sunday.

Cody gloated over his Caleb's play and fit with the Heat.

To no one's surprise, you can just tell that this is genuine. The pride they brim with when talking about one another's career breakouts was an emotion filled with warmth. 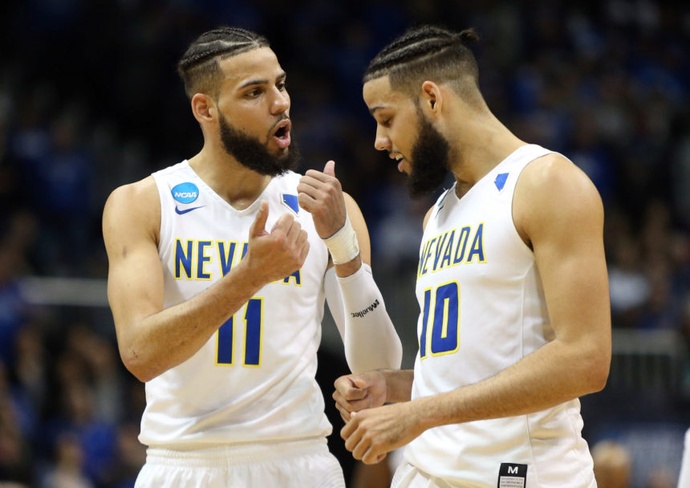 Though Saturday will be the first non-exhibition game Caleb and Cody will play against one another (Caleb was inactive when Charlotte and Miami first played this season), things aren't as different as they might appear on the surface. The jerseys may not be the same, but their mentalities and energy remain resolute.

Maintaining significant roles on opposing teams with playoff aspirations, the fraternal nature of their twindom can finally be seen abroad by a demarcation in their playing styles. Being apart has allowed them to flourish as individuals, but all their time together helped them get here.