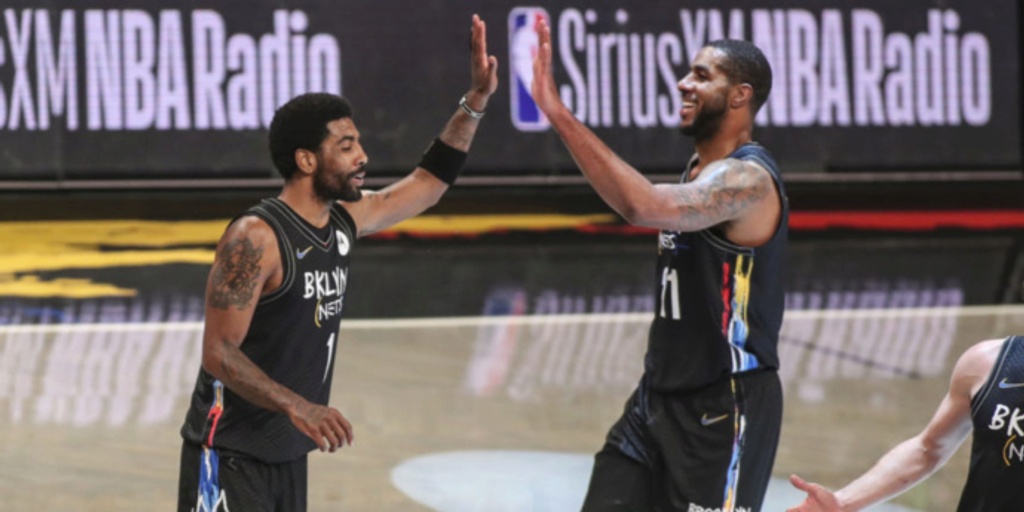 Naturally, the focus on the Brooklyn Nets in the upcoming season will be their superstar trio of Kevin Durant, James Harden and Kyrie Irving. But when it comes to achieving their ultimate goal, there are four new 30-something-year-old players who will give Brooklyn a level of experience greater than any team in the Eastern Conference.

Patty Mills, Paul Millsap, LaMarcus Aldridge and James Johnson have joined the Nets, who were ousted by the eventual-NBA-champion Milwaukee Bucks in the second round of the playoffs last season. (Brooklyn dropped Games 6 and 7 after holding a 3-2 lead.)

Aldridge and Millsap are both 36, Johnson is 34 and Mills is 33. Put them together along with Durant (32), Harden (32), Blake Griffin (32), Joe Harris (30) and Irving, who will turn 30 in March, and the Nets have one of the most experienced rosters ever to compete for an NBA title.

And make no mistake, a title is what the Nets are after – something they made clear in no uncertain terms Tuesday as coach Steve Nash and general manager Sean Marks met with the media in advance of the opening of training camp later this month.

“Our goal is to be the last team standing,” said Marks, adding that a couple of the Nets players – he would not name exactly which ones – are not yet in compliance with new NBA COVID protocols that will impact teams in New York and California.

The NBA reportedly informed teams in early September that new laws in both New York and San Francisco regarding vaccine requirements will be enforced for members of the Knicks, Nets and Golden State Warriors unless there is an approved medical or religious exemption. The NBPA has refused to budge on its demand that players not be required to take the vaccine, and any proposal that mandates vaccination remains a "non-starter,” according to ESPN.

Marks, without getting into specifics, says he expects to have all 19 players available when camp opens, and a decision will be made over the next week on whether to bring in a 20th player to compete for a roster spot or to sign a two-way contract.

Marks also said he is engaged with representatives for Irving and Harden on contract extensions, which would allow the Nets to have their superstar trio signed for the long-term after Durant signed a four-year, $198 million extension over the summer.

What will make the Nets different this season — aside from health issues, which impacted the team considerably last regular season and postseason — is the veteran depth they have added through the signings of the four seasoned free agents; arguably the most notable is Aldridge, who joined the Nets last season before issues with an irregular heartbeat forced him to retire and miss the team's playoff run.

Aldridge has now been cleared by a cardiologist and is gung-ho to resume his career. “I tried to talk him out of it,” Marks said. “He stated, like several of our guys, that there was unfinished business here. He was fighting to be back to be on the last team standing, and he wants to be a part of it.”

As a practical matter, Nash will have to seek ways to find a rotation that both incorporates all of the new players (along with the returning players) and keeps everyone satisfied with their roles. The Nets already had three ball-dominant players in Harden, Irving and Durant. Mills has the capability of being a microwave type as well, as he showed with the Australian national team's bronze-medal run; he averaged 23.3 points and 6.3 assists per contest, and scored 42 points in the Aussies’ final game of the Tokyo Olympics.

The presence of all of those veterans will make it difficult for Nash to find playing time for his rookies, which include first-round picks Cam Thomas and Day’Ron Shape and second-round picks Kessler Edwards, RaiQuan Gray and Marcus Zegarowski.

It is the type of “abundance of riches” problem that other coaches would love to have. For Nash, it is a matter of managing those players’ expectations. To illustrate that, Nash explained when he was a first-round pick (15th overall by the Phoenix Suns in 1996), he played only 10-and-a-half minutes per game before going on to a Hall-of-Fame career.

“We’ve added a lot to our collective IQ and experience,” Nash said.