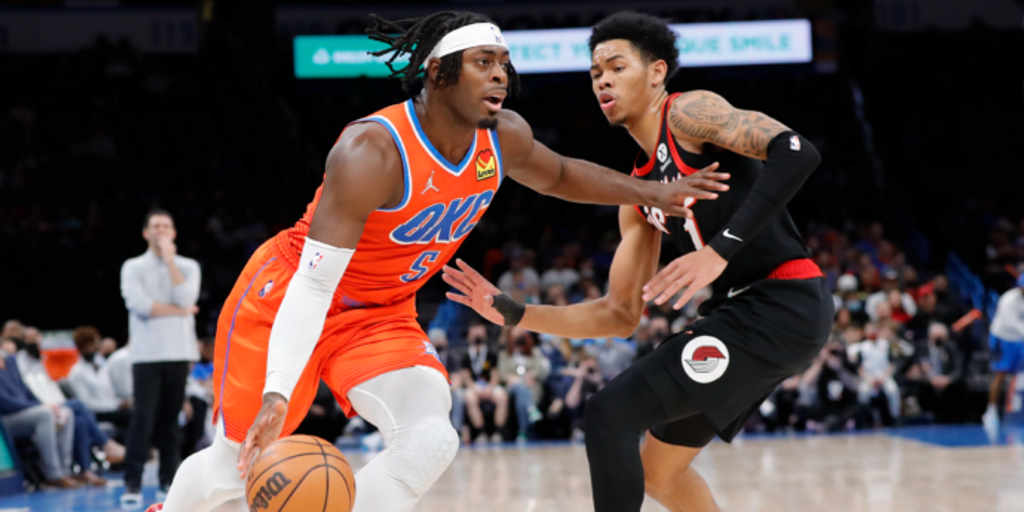 Analyzing 4 hypothetical trades for the Blazers' No. 7 draft pick

Last week, after reports surfaced that the Sacramento Kings were willing to deal the fourth overall pick in the right deal, we examined several potential trade scenarios.

On Tuesday, plugged-in reporter Jake Fischer of Bleacher Report relayed that the Portland Trail Blazers "remain widely expected to pursue trade scenarios with the No. 7 pick in order to add a complementary veteran alongside All-NBA guard Damian Lillard."

In addition, The Athletic's John Hollinger and Sam Vecenie reported the Blazers lottery pick "seems even more certain to be on the move," adding that Portland "will push to immediately put a competitive team around Damian Lillard rather than start over."

So, let's analyze several potential trade scenarios that might make sense for both Blazers and possible partners.

Detroit Pistons trade Jerami Grant to the Blazers in exchange for the No. 7 overall pick and the rights to Milwaukee's first-round pick in 2025

Although Jerami Grant hasn't received much national attention while playing for the Pistons, he has posted solid numbers and is respected league-wide as a valuable, versatile, two-way contributor. During his two years in Detroit, he's averaged 20.9 points, 4.4 rebounds, 2.6 assists, 2.0 made treys and 1.1 blocks per game. Only three other players have averaged at least 2.5 dimes, 2 treys and a block per contest over the past two seasons: LeBron James, Karl-Anthony Towns and Kevin Durant.

Grant, who was a teammate with Lillard on Team USA last summer, just turned 28 and is in the heart of his prime. However, Grant has just one season left on the three-year, $60 million deal he signed in 2020. Yet, if the Blazers acquired Grant before Aug. 9, he would be eligible to sign an extension for up to $112 million over four years. If the Blazers are looking to "win now," Grant would be a superb addition. In February, it was reported that Portland and Detroit had discussed a deal for Grant before the trade deadline.

The Blazers gained a $20.9 million trade exception in the deal that sent CJ McCollum to New Orleans, and Grant's $20 million salary in 2022-23 would fit snugly into that exception.

From the Pistons' perspective, the seventh pick would allow them to add another young prospect alongside Cade Cunningham, Saddiq Bey, Isaiah Stewart and Killian Hayes. According to Fischer, Detroit's "known asking price" for Grant is "two first-round picks or a first and a promising rookie-scale prospect."

Toronto Raptors trade OG Anunoby to the Blazers in exchange for Nassir Little, the No. 7 and No. 36 picks and a 2024 first-round pick

Fischer notes in his latest post that "word has circulated among rival front offices that OG Anunoby grew dissatisfied at times with his role in Toronto." And although Portland is one of the potential landing spots OG has been linked to in trade chatter, "league personnel believe Toronto would require far more than [Josh] Hart and the seventh pick to part with Anunoby, considered to be a darling of Raptors lead executive Masai Ujiri."

So, would the No. 7 selection paired with Nas Little, an early second-rounder and a future first be enough to entice Ujiri? Little is coming off what looked to be the best season of his young career before going down with a shoulder injury. In the 23 games he started for Portland, he averaged 11.1 points, 5.8 rebounds, 1.7 assists, 1.4 made three-pointers and 1.1 blocks, while posting the second-best Net Rating among all of the Blazers' rotation regulars. He won't celebrate his 23rd birthday until next February and is locked into his rookie contract, which will pay him just $4.1 million next season.

Like Grant, Anunoby's salary would fit into the Blazers trade exception.

It's also worth noting that the Raptors met with G League Ignite prospect Dyson Daniels, a highly-touted prospect who will almost assuredly be a top-10 pick in the upcoming draft. Because the Raptors don't have a first-rounder in this year's draft (having traded the No. 20 selection to the San Antonio Spurs), "news of Daniels' interview with the Raptors seemed to raise some questions about Toronto's plan for the future."

Oklahoma City Thunder send Luguentz Dort and the No. 12 pick to the Blazers in exchange for the No. 7 pick, Justise Winslow and Drew Eubanks

Lu Dort established himself as one of the best young defenders in the NBA this past season and is a highly-valued, two-way contributor for OKC. Not only did he excel on the defensive end, but he also showed significant improvement offensively. Over the final nine games Dort appeared in (before tearing his left labrum), he averaged 22.3 points and 3.2 made three-pointers while shooting over 37% from downtown and 82% from the free-throw stripe. However, Thunder general manager Sam Presti has to ask himself how much he is willing to pay to keep Dort in Oklahoma City for the long term.

Dort has one year left on the minimum salary contract he signed back in 2020, but if OKC exercises his $1.9 million team option for 2022-23, they risk losing him in free agency next summer. If OKC picks up the option, Dort would be eligible to sign an extension worth nearly $60 million over four years, starting with an annual salary of approximately $13 million. (Dort's team option for the 2022-23 season would need to be exercised in order to be traded. Otherwise, he would not be eligible.)

If Presti has reservations about committing major money to Dort (for context, Shai Gilgeous-Alexander is the only player currently on the OKC roster with more than $6 million in guaranteed salary over each of the next two seasons), would he consider trading away Dort to move up into the top seven?

While the Blazers have plenty of offensive firepower in their backcourt with Lillard and Anfernee Simons, they need to bolster their defense. Consequently, they may be willing to pony up and do what it takes to lock Dort up and ink him to a lucrative, long-term contract.

(FWIW, Lillard recently liked a tweet suggesting Portland trade the No. 7 pick for either Dort or Jerami Grant.)

New York Knicks send Julius Randle and the No. 11 pick to the Blazers in exchange for Eric Bledsoe, Justise Winslow, the No. 7 and No. 36 picks

Which Julius Randle would the Blazers be trading for?

The dude that earned a second-team All-NBA nod in 2020-21 after becoming just the seventh player in NBA history to average at least 24 points, 10 rebounds and 6 assists over an entire season? (Joining ​​Wilt Chamberlain, Nikola Jokić, Larry Bird, Russell Westbrook and Oscar Robertson.) Or the guy who was wildly inefficient in 2021-22, when he became the first player in league history to attempt more than 300 three-pointers and 300 free throws, yet shot below 42% from the floor, below 31% from downtown and below 76% from the charity stripe?

For a Blazers team with limited options due to Lillard's hefty salary and the prohibitive cost of re-signing both Simons and Jusuf Nurkic, it may make sense to add Randle in the hopes that he regains his All-Star form. Randle is in prime and, like Lillard, is signed through the 2024-25 season. A starting lineup of Dame, Simons, Hart, Randle and Nurk, with Little in the sixth-man role, could be a dangerous team. And to add Randle, the Blazers would only have to move back four spots in the first round and part with a second-rounder. In a draft in which there is little consensus after the top four picks, the prospect Portland is targeting at seven might still be on the board at 11.

As for the Knicks, if they want a crack at Dyson Daniels, Shaedon Sharpe or Bennedict Mathurin, they will likely have to jump up a few slots. And parting ways with Randle could be viewed as addition by subtraction, as it would clear his contract from New York's cap and open up a spot in the starting lineup for Obi Toppin (who averaged 27.2 points, 6.2 rebounds and 3.8 made three-pointers per game in April). Bledsoe has just one year left on his contract, and that one season is only partially guaranteed for $3.9 million.