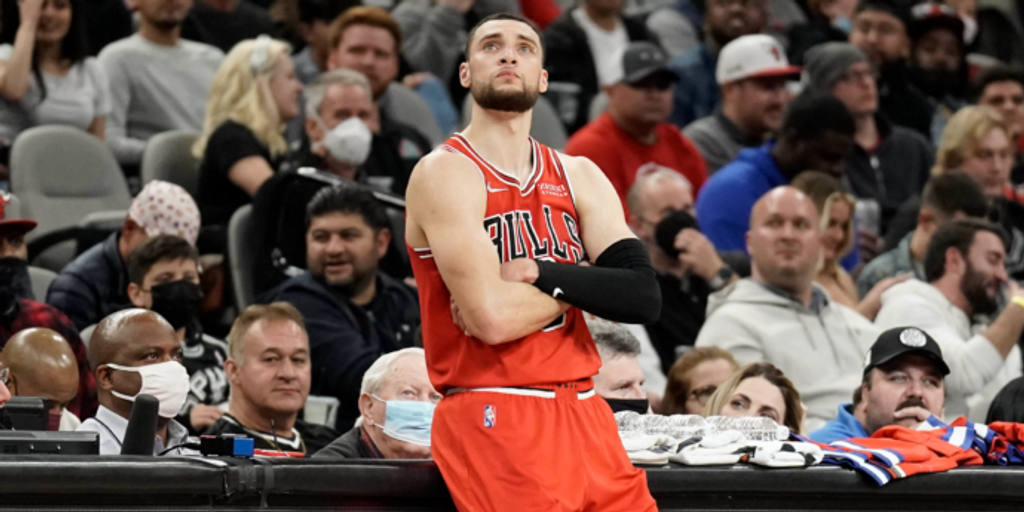 At the beginning of the 2021-22 season, it was a foregone conclusion Zach LaVine would eventually re-sign with the Chicago Bulls on a max contract. However, over the last month or so, there’s been buzz about LaVine potentially taking his talents elsewhere.

Does it actually make sense for LaVine to leave the Bulls, an infrastructure well built to accentuate his strengths? If LaVine bolts the Windy City for greener pastures, the fit, not market size, should be of the upmost importance.

The market will be robust for LaVine as an upcoming unrestricted free agent, slotted at No. 1 overall on BasketballNews.com's Free Agent Rankings page. LaVine joining a contender would instantly vault its status amongst the Association’s elite.

Without further ado, let’s go ahead and try to figure out the best logical fits for LaVine away from Chicago via sign-and-trade.

Miami’s dire need for another aggressive scorer to pair alongside Jimmy Butler was showcased on the biggest possible stage. The usage on Butler’s plate is simply too much, and Kyle Lowry has proven to taken a step back on the offensive end as well.

LaVine alongside Butler, Lowry and Bam Adebayo would be a dream scenario to unfold for the Heat. This offseason feels like the perfect time to make that all-in move with this core, especially with future draft picks available in deals.

Herro is the crown jewel of this deal for the Bulls, so it all depends how they view him. Tucker going back to Chicago also adds even more toughness on the defensive end with Lonzo Ball and Alex Caruso.

For contenders, pulling off a sign-and-trade to acquire LaVine is a little tricky. A third team would need to be involved to make salaries work; in this instance, that franchise takes on the bloated salary of Robinson and is rewarded with draft compensation for its participation. Look for teams with cap space that are rebuilding (Indiana Pacers, Oklahoma City Thunder, etc.) as potential dance partners under any sign-and-trade involving LaVine to a Finals contender.

Could you imagine the fireworks on the scoreboard with Trae Young and LaVine sharing a backcourt? That’s more than worth the price of admission for Hawks games, and it helps elevate their core to being a legitimate contender immediately. LaVine and Young being flanked by endless amounts of defensive versatility and length is a recipe for success.

What makes the Hawks’ sign-and-trade more realistic is Gallinari’s contract, which only has $5 million guaranteed. Atlanta would surely cooperate for draft compensation in order to bring LaVine aboard.

Chicago receives a promising three-level scorer in Huerter, plus a much-needed rim protector with Okongwu. This feels like a strong return for the Bulls under this scenario.

For Atlanta to make this work, a third team has to get involved that can absorb Gallinari's $21 million salary. Luckily, again, only $5 million is guaranteed, so the third team can easily get off his contract. The Pacers are mentioned here once more because I expect them to operate in a Thunder-like manner this offseason, as they really kick off their full-scale rebuild. Expect to see Indiana take on contracts for future draft capital, which would help project the rebuild timeline more clearly.

Luka Doncic needs help in Dallas for championships to be a realistic aspiration. Doncic is already one of the best players in the league at 23 years old, but how will the Mavericks further construct the roster around him? If Dallas is indeed going to make a splash, going for LaVine compared to a big man like Rudy Gobert is the smarter play. Doncic and LaVine would be a deadly backcourt duo that could go toe-to-toe with any team in a more perimeter-oriented NBA.

The Bulls receiving Brunson back in a double sign-and-trade would be a huge win, allowing his game to further blossom alongside an elite wing scorer like DeMar DeRozan. Brunson helps keep Chicago afloat in the Eastern Conference, while also presenting an enticing long-term piece to its core.

While Brunson would need to sign off on this, as would LaVine, I think he would gladly pursue this idea. Operating as the No. 2 scoring option alongside DeRozan, Brunson will be able to further blossom his all-around game for a win-now contender in the East. Adding Brunson alongside Ball and Caruso also takes playmaking pressure off Brunson, which allows him to continue mismatch hunting in 1-on-1 situations.

If the Bulls are on track to lose LaVine, finding an even more motivated Brunson as the return compensation is a massive win for them.

The third team getting involved to take on Hardaway's remaining salary is Portland, who needs to find any sort of scoring help it can alongside Lillard. Hardaway certainly wouldn't be a splashy transaction for the Blazers, but his added offensive punch in the starting unit or off the bench would be a welcome sight. Trying to find a taker for THJ will be tough, so offering a future lightly protected first-round pick probably is the going cost.

We’ve now reached the portion where a team can outright sign LaVine without having to maneuver a sign-and-trade. How ironic would it be for LaVine to go join DeRozan’s former team alongside fellow Pacific Northwest resident Dejounte Murray? That’s a very strong complementary backcourt, but is it enough in the Western Conference to make a serious jump forward? We all know Spurs head coach Gregg Popovich would be all aboard a win-now idea at this stage of his career as well. 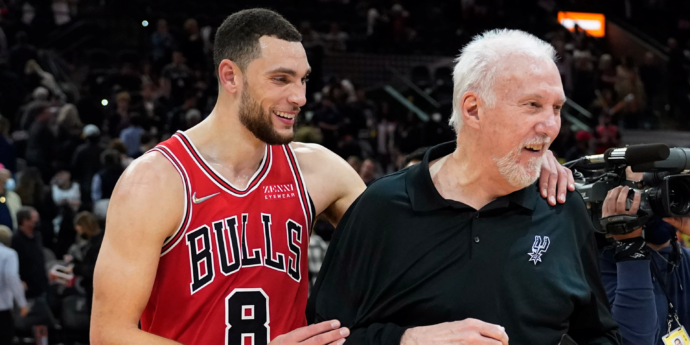 For the Spurs, they need to find that final piece to an already intriguing core. Murray and LaVine leading the Spurs' youth movement forward towards realistic playoff contention each year would be a much-needed step forward. LaVine's arrival would take ample pressure off Murray, plus the latter's defensive presence helps further optimize the former.

Portland could be under new ownership, and the frontrunners as of Thursday indicate it could be a huge win for the organization. Nike founder Phil Knight and Los Angeles Dodgers co-owner Alan Smolinisky are leading the charge, so we’ll see if that occurs soon.

On the court, Damian Lillard would love having a player like LaVine. A modern three-guard starting unit consisting of Lillard, LaVine and Anfernee Simons would simply be unfair trying to contain for all 48 minutes.

The Blazers would still need to make more roster moves — maybe shipping off their No. 7 overall pick for Detroit Pistons wing Jerami Grant — but adding LaVine would signal they’re finally ready to go for it. In order to keep Lillard around past next season, making an all-in move for LaVine wouldn’t be surprising one bit.

Let's say Portland pulls the trigger for an aggressive draft-night move involving Grant or Raptors wing OG Anunoby. If that occurs, it's the Blazers signaling to the NBA that they're ready to have a very aggressive offseason. Retooling on the fly and forming a deadly backcourt combination would quickly put Portland back on the map in the West.

Portland would need to gut their entire roster outside of Lillard and Simons to make an Anunoby/LaVine scenario possible under the salary cap. It's a lot of transactional work, but the end result for the Blazers would be an instant threat to make a deep postseason push with Lillard, LaVine, Simons and Anunoby.

Less than a month away from the NBA’s legal tampering period opening, LaVine will become one of the hottest commodities available. Unless LaVine believes the Bulls are not real contenders, it would make the most sense for him to return on a new long-term deal. If it gets to the point we’ve discussed, the Bulls will be okay extracting heavy amounts of value for a player on the way out.

NBA free agency was expected to be quiet, but, as we all know, the game never sleeps. Anything can happen, and this offseason is shaping up to be another wild one with star movement soon on the horizon once more.