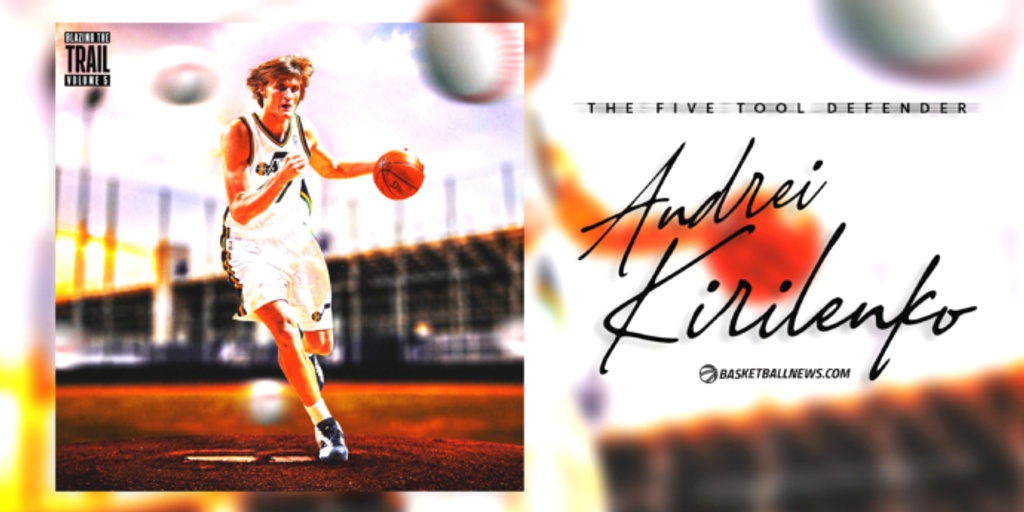 In this fifth installment, Mat goes in-depth on one of the most versatile defenders of all-time: Andrei Kirilenko. He explains what made him different from other off-ball rovers who came before him, with insights from his former coaches, teammates and more.

No player in this series has garnered more anticipation than Andrei Kirilenko. A quick survey of the internet yields countless articles and YouTube videos that are all centered around the same premise:

Kirilenko would be a perfect fit in today’s era.

Did Kirilenko serve as the prototype for the modern-day defender? During his prime, was he a revolutionary and a superstar?

WHAT MADE KIRILENKO SPECIAL?

In baseball, a "five-tool player" is bestowed this label if they display excellence in five categories: hitting for average, hitting for power, fielding, speed and throwing. 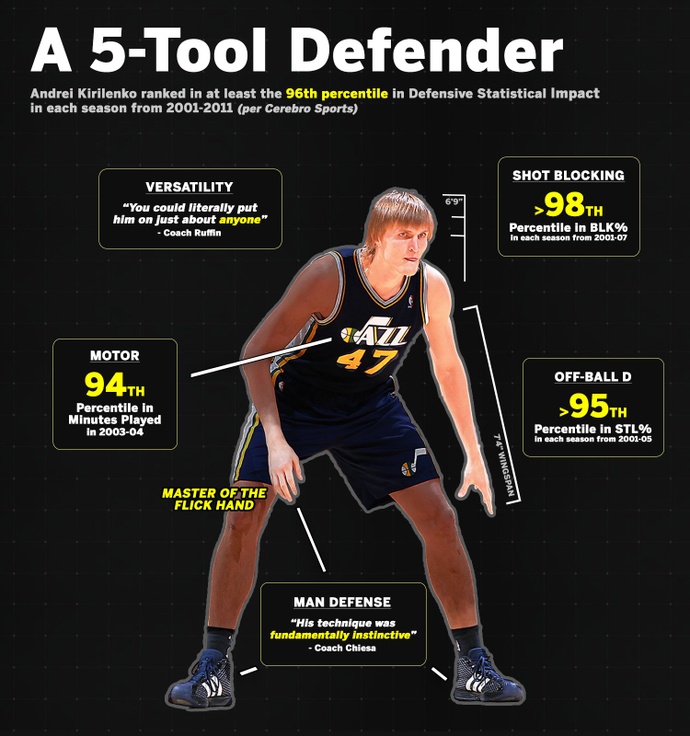 Kirilenko touted great length, reflexes and an active ‘tap-dancing’ stance (see clips below) that enabled him to keep the ball in his line of sight at all times.

On top of that, he mastered the ‘flick-hand technique,’ which aims to force ball-handlers to dribble East to West rather than North to South (since it's harder to get in the paint when you can’t move forward).

"[Your] defensive hand is on the ball side, and [you're] flicking [your] hand up towards the ball – without losing [your] balance – to make their dribble lateral, so that it's more protective [rather than] more downhill," Chiesa explained to Basketball News.

While Kirilenko’s primary assignments were forwards, he was capable of guarding shiftier speedsters and gargantuan bruisers as well.

“You could literally put him on just about anyone,” recalled Michael Ruffin, Kirilenko’s former teammate who is now an assistant coach with the Phoenix Suns. "[He] had the speed, quickness, length to keep up with guards… on the perimeter. That’s who he would end up guarding a lot [of the time].”

Kirilenko even developed antidotes to deploy when going up against the more powerful, low-post big men of the time.

“Even on the post with a bigger, banging guy… he could make it difficult for them to get the ball deep by fronting them,” said Charlotte Hornets assistant Tyrone Corbin, who coached Kirilenko in Utah. "What he would do is put the work in early [in the post] to make the catch a little further out, so they wouldn’t catch it so deep in the paint.”

And if the big man somehow managed to receive the entry pass?

“He would go after the ball and keep them off balance that way,” Corbin explained.

“The thing I remember about him most is that he [was] a defensive playmaker,” Chiesa said.

Each season from 2001 to 2011, Kirilenko finished in the 96th percentile or higher in Cerebro Sports’ Defensive Statistical Impact metric (which measures defensive playmaking).

“What made Kirilenko brilliant, I call it early eyes,” Chiesa explained. “He could read plays before [they] happened… and he was able to be cat-quick and jump in the passing lanes to steal the ball, block a shot or pickpocket somebody.”

Among other things, Kirilenko was adept at doubling down from the perimeter – the concept of rotating over from the perimeter to double a player on the low block (which was particularly important during that era considering the high volume of post-ups).

“People never understood how long he really was,” Corbin said. “He could be at the nail/elbow, and a guy could get the ball in the post and turn to dribble or make a move, and he’s on top of them knocking the ball out.”

Legendary Jazz coach Jerry Sloan was known for stressing the importance of conditioning in all his practices.

“That’s one of the biggest sticklers with Coach Sloan: you had to be in great shape,” Corbin emphasized. “Most of the things that we did every day involved some kind of drill [with] conditioning as part of the drill.”

Upon reflecting on his experiences, Ruffin agreed with Corbin’s assessment.

“The philosophy of the team… was that every time you stepped on the court, you go hard,” Ruffin said.

Kirilenko did not deviate from this mission statement. During his iconic run in the 2003-04 NBA season (more on that in a bit), he finished in the 94th percentile in minutes played. And he spent every second of those nearly 2,900 minutes stalking the terrain at a frenetic pace.

Kirilenko was a human eraser of the highest order, and his acumen as a shot-blocker is what separated him from the likes of Shawn Marion – the other multi-faceted forward of that time.

During his career, Kirilenko posted a whopping seven seasons with a block percentage of 4% or higher. Marion, on the other hand, never surpassed 3%.

With his condor arms, impeccable timing and recovery speed, Kirilenko was terrific at swatting away attempts.

“Super timing. Super, super timing," Corbin said. "And his ability to recover – to get from point A to point B – especially off the ball when he could be on the weakside. A guy could drive thinking he was open; [Kirilenko] would get from where he was to the ball quickly before the guy could alter his shot or see him coming.

“As good as he was on the ball, he was better coming off the ball because guys couldn’t see where he was coming from.”

Prior to the 2003-04 NBA season, ESPN writer Frank Hughes predicted that the Utah Jazz would lose more games than any team in NBA history.

Not only did Utah outperform these not-so-lofty expectations, they came within one game of the playoffs in the loaded Western Conference.

“When things like that usually happen, you look back, and you’re like, ‘Oh, we missed on three or four of those players. They were way better than we thought,'” said David Locke, who has been the radio voice of the Jazz for 13 years.

“I don’t think that exists on [the Jazz’s] roster. I think the only one we missed on was a 22-year-old Andrei Kirilenko [who] was just a way better player and more important than people realized.”

Advanced data helps us understand Kirilenko's impact that season. Basketball Reference’s Box Plus-Minus paints Kirilenko as a top-three player in the league that year, with the next-best Jazz player ranking 75th. While top-three may be unlikely, he was pretty darn close.

In 2003-04, Utah's defense was 2.2 points stingier per 100 possessions with their Swiss-army-knife defender on the floor (which ranked in the 72nd percentile, per Cleaning the Glass).

What’s more, AK-47's value extended beyond his defense. He also boasted a progressive offensive game – one that improved Utah’s attack by 9.5 points per 100 possessions (ranking in the 97th percentile, per Cleaning the Glass).

Along with being a revolutionary defender, Kirilenko had an incredibly modern (and underrated) offensive game.

He was a decisive passer, an eager cutter, a fearless driver, and a FT drawing machine.

He would have been the perfect player in today's read-and-react react game. pic.twitter.com/dvEZTxxWDJ

Put those two outputs together, and the Jazz had a +11.8 efficiency differential per 100 possessions when Kirilenko was on the court. That year, the only other All-Stars to achieve that mark were Kevin Garnett (the 2003-04 MVP), Shaquille O’Neal, Jason Kidd and Brad Miller.

(Note: On the Blazing the Trail podcast, historian Cody Houdek and I broke down where Kirilenko ranked in the league that season, and we ultimately landed on him falling somewhere in the 8-12 range).

Chiesa’s Jazz spent the late 1990s being vanquished by a team that rostered a player in Kirilenko’s likeness: Scottie Pippen.

“Defensively, [Pippen] was a defensive playmaker who could guard all five positions, and that was Kirilenko,” Chiesa compared.

Like Kirilenko, the Secretary of Defense touted the illustrious five defensive tools and, as a result, left a significant mark on that end of the floor – quarterbacking five top-5 defenses during his 10-year tenure in the NBA.

Both defensive roamers by nature, Kirilenko was able to become arguably more impactful than his predecessor thanks to the abolition of illegal defense rules in 2001. Before this rule change, zone defense was banned, and if teams/players wanted to execute these exotic coverages, they had to do so covertly, which greatly mitigated the value of off-ball roamers such as Jones.

In the era of pace and space, the logical defensive counter to this increased surface area is to obtain personnel who can cover this space efficiently.

As alluded to in the previous section, rule changes enabled Kirilenko to operate unrestricted in a manner his forefathers never could. And this confluence of events, combined with his unique physical tools and instincts, made him the prototype for the space-ball defender.

Today, the NBA landscape is littered with players who resemble Kirilenko's robust defensive palate. Nearly every prominent defender in the Association has shades of Kirilenko’s design in their own game.

“I think that [Kirilenko] is actually a lot like Mikal,” said Ruffin, who coaches Bridges on the Suns. “They are both extremely long, they move really well [when] negotiating screens, both have good motors, and they both take pride in defending.”

As for reigning Defensive Player of the Year Marcus Smart, Ruffin said that he inherited Kirilenko’s versatility. Like Kirilenko, Smart regularly faces off against defenders far larger than him in stature, and he holds them off using the same fronting techniques Corbin alluded to earlier.

Draymond Green, arguably the best defender of his generation, may share the most similarities with Kirilenko — possessing all five of his fancy utensils. And similar to how Kirilenko surpassed Jones, Green one-upped AK-47 by adding a rim-deterrence component to his game.

The best paint protectors deter opponents from taking shots in the restricted area entirely, and Green is no exception. This past season, opponent rim frequency decreased by 5.4% when he was on the court (which ranked in the 99th percentile, per Cleaning the Glass). Unfortunately, Kirilenko's presence didn’t have the same effect, as the opponent's rim frequency oftentimes increased when he was on the floor.

Thanks to the movement initiated by Kirilenko (and capitalized on by Green), every team is looking for the next torchbearer to the space-ball-defender lineage.

In fact, Utah may have just stumbled upon its second iteration of the archetype in recently acquired Jarred Vanderbilt. When asked about their parallels, Chiesa pulled out his notes from when the Jazz and Timberwolves faced off on December 31, 2021, and read them aloud:

“Lengthy frame, long arms, pretzel legs… wily defensive ball-retriever, glides in from perimeter to block shots, active back-tipper into transition, early-eyes anticipator, in and out of the passing lanes, steal maker… around the ball consistently.”

Meanwhile, in Toronto, the Raptors believe they hold the key to the next link in the five-tool chain in reigning Rookie of the Year Scottie Barnes.

“I think Scottie is overall a better talent [than Kirilenko]," Raptors assistant coach Adrian Griffin told Basketball News. “I’m not taking anything away from Kirilenko… but I think there is something special about Scottie.”

Seeing the direction the league is going, it makes sense why people always ponder how Kirilenko would fare in today’s game.

But don’t let his status as a revolutionary fool you; he was a damn good player during his time too. 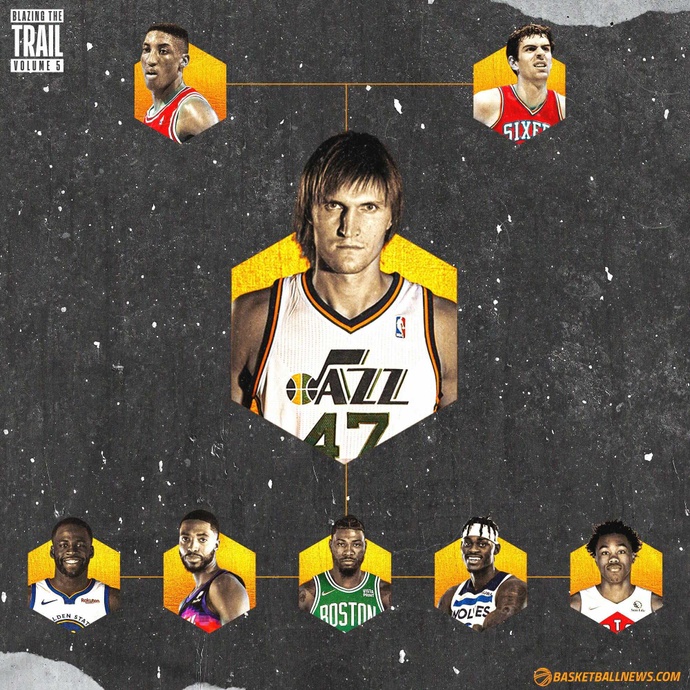 Check back next week for Part VI of Blazing the Trail, which focuses on Shawn Kemp, the aerial artist.

Click here to read Part I: Steve Nash, the magician who danced in the paint