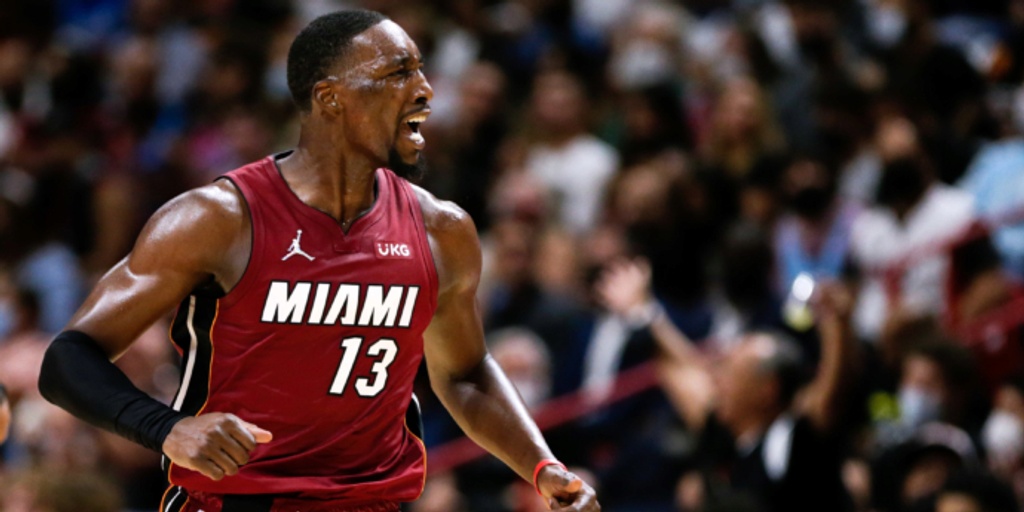 Earlier this offseason, Miami Heat star Bam Adebayo vowed to win the Defensive Player of the Year award this season, adding that he should have won it the previous two years.

Despite Adebayo's defensive impact, he has never been selected as a Defensive-Player-of-the-Year finalist (meaning he has never finished top-three in voting) or earned a spot on the All-Defensive First Team. He's hoping to change that this season.

When asked what he would consider a successful 2022-23 season, he listed off some lofty goals.

"DPOY. All-Star. All-NBA," Adebayo told Heat.com's Couper Moorhead. "I feel like I have that type of ability, that type of blessed talent to do that in a season. It’s not going to be easy. Because nobody is watching us. Nobody wants to talk about us."

While Adebayo has been selected to the All-Defensive Second Team three years in a row, he believes that he doesn't get enough credit for his defensive versatility.

"I feel like I’m damn near the only guy [who can guard every position]. Me, and I give Draymond [Green] and probably Giannis [Antetokounmpo], three guys who can literally guard 1-through-5 and be effective," Adebayo told Heat.com. "Switch onto a Kyrie [Irving]. Switch onto KD. Switch onto Joel Embiid. The thing about guards winning it is they don’t be down there. They don’t be in that semi-circle...

"It’s extraordinary because nobody else is doing it. You don’t see a lot of guys [where] they’ll switch, they’ll guard the guard, then you throw the lob and they run back and get the block. That’s not normal. It’s just because I’m god gifted and he’s blessed me with this ability to do it every so often and make it look easy. But my goal is to win it. One of these days, [they’re] going to look and be like well, ‘He’s been doing this over here for far too long, this is your chance now.’"

When asked why the Defensive-Player-of-the-Year award matters so much to Adebayo, he explains that he's always been (and always will be) a defense-first player.

"Just because I came into the league as a defensive guy. That’s how I got onto the court. That’s how I made my name," Adebayo told Heat.com. "It started with that first clip of me defending Steph [Curry] and it just took off from there. To the point where Spo (Erik Spoelstra) would put me on the primary scorer – one game he would say, ‘We’re playing Houston, you’re starting on Russell [Westbrook]’. Next game in L.A. he’d put me on Kawhi Leonard or PG (Paul George). It was just building that trust to where I could, in my mind, be Defensive Player of the Year. In my mind, I’ve proved that."

The 25-year-old is frustrated that his defense continues to fly under the radar. He pointed out that his Heat teammate Udonis Haslem "never got any credit for how great he was on defense" either.

"It’s whatever at this point... I just mean from a politics standpoint," Adebayo told Heat.com. "I’m going to always go for the award. I’m never going to give up on anything that I set my mind to. It’s set in stone... From my point of view, I’m going to make them watch me. You have to see me. When we get on these national-television games, that’s the point of having them. You want to see young talent...

"Imma win this s***. Last year, they said it was because of my missed games. But if you look at the stats. My stats are up there with everyone else. I missed X amount of games but my stats are damn near everyone else’s, and you’re going to tell me I can’t win it? And then I’m not a finalist, or First-Team [All-Defense]?"

Entering the 2022-23 season, Adebayo has the second-best odds to win the Defensive Player of the Year award (+650) behind only Rudy Gobert (+425), who was traded to the Minnesota Timberwolves this offseason.