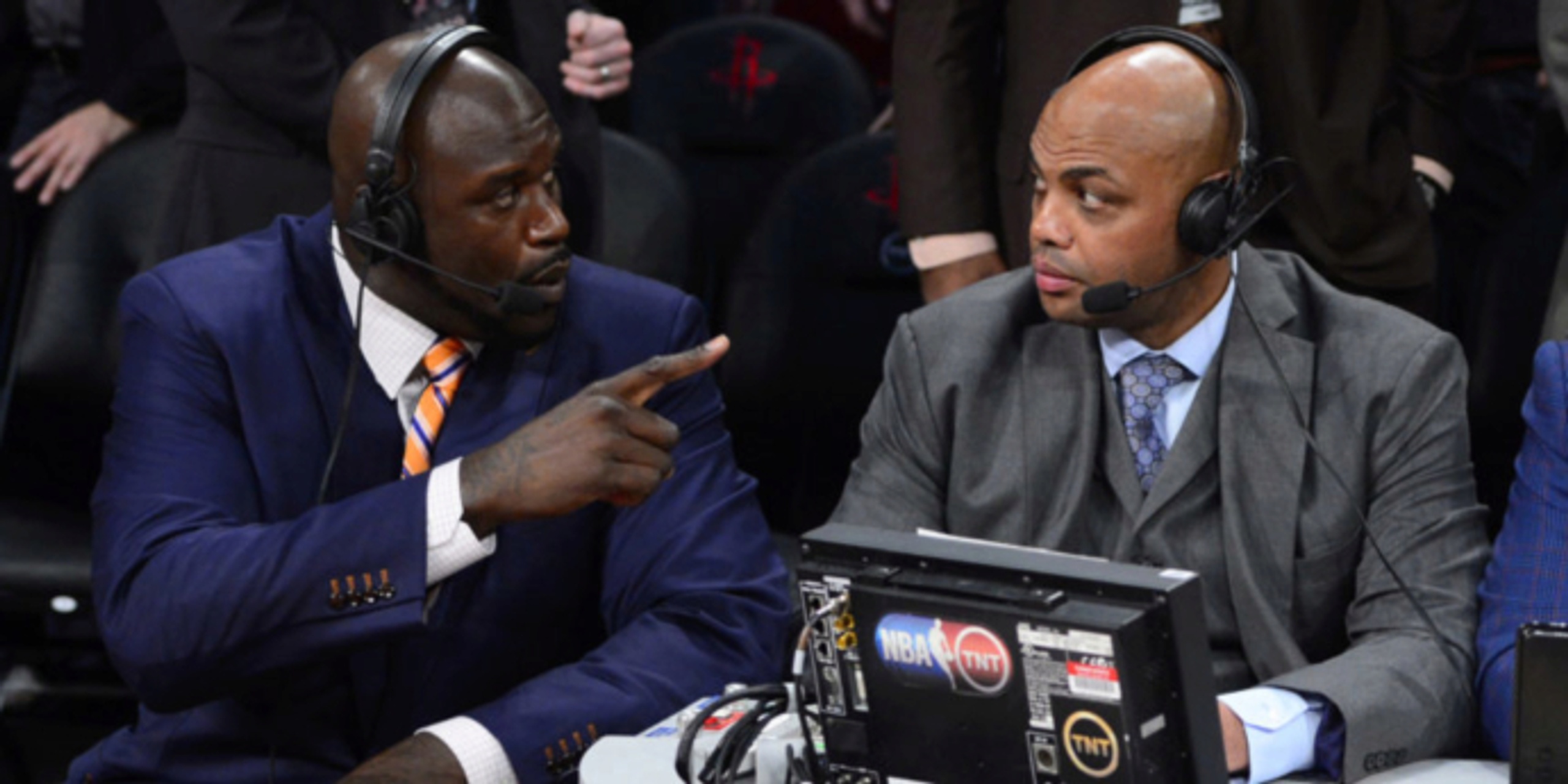 Shaquille O’Neal and Charles Barkley have been two of the biggest critics of Ben Simmons since the start of the season.

“One, he’s not showing up. As a player, you have to be able to be real with yourself,” O’Neal said on CBS Sports Network's Tiki and Tierney. “You need to be aggressive and he definitely got exposed last year in the playoffs, he didn’t want to shoot.

“You have to look in the mirror and say, ‘Am I as good as I can be?’ He’s going about it all wrong. He could have gone into the office, say ‘Hey, my feelings are hurt. You guys didn’t stick up for me. I’d like to professionally ask for a trade.’ The question is, does anyone want him? I’m not paying $200 million for a guy who will not be aggressive and will not shoot in playoff time.”

Tuesday night on Inside the NBA, Shaq and Barkley continued their public criticism of Ben Simmons before the Milwaukee Bucks and Philadelphia 76ers tipped off. Barkley has sided with the 76ers and upper management, and feels they are doing everything possible to resolve the standoff. In Barkley’s words:

"This dude has done everything he can not to be re-recruited."

Chuck talks about Ben Simmons and how the Sixers should move going forward. pic.twitter.com/hVvxHDDRJZ

“This dude has done everything he can not to be re-recruited," Barkley said. "Thеy started off the season begging him to come back. They have maѕѕaged him, Shaq. They’ve bеnt over backward to kiѕѕ this dudе’ѕ ass. Now, it’s timе thеy start kicking his ass. There’s only two: You kiѕѕ ѕomebody’s aѕѕ, or yоu kick their ass.”

I sat down with Gilbert Arenas for "The Rematch," and he didn’t mince words regarding Shaq and Barkley’s consistent criticism of Ben Simmons.

Here is an excerpt from our discussion:

Etan Thomas: I want to ask you about this Ben Simmons situation. Now, there's a lot. It's interesting. I wrote an open letter to Ben Simmons. And a lot of the feedback from people was that I was being too nice to Ben Simmons. And although I pointed out all of his missteps through this whole process, I didn't go just on full attack bashing him. And that's what a lot of people wanted. They wanted to have other people bash him. "He's terrible, he's weak, he's soft." And I didn't do any of that. I did the opposite of encouraging him that. "I hope that when you come out of this, that you come out with a Mamba Mentality and don't let nothing affect you," and everything like that, "But these were your missteps here all along this way." But it's interesting that so many people don't understand or can't sympathize, or even imagine how he feels.

Gilbert Arenas: Because they're looking at the basketball player, Ben Simmons. So I don't think people separate the basketball player from the human. Right? And once a Shaq or Charles Barkley say it, it becomes law. In fact, they were the same. If they want to call him a prima donna, you were the same prima donna when you were the man. It's crazy because [Simmons] is a quiet kid. He's not this rah-rah type of guy. He's a quiet kid who just wants to just play, and then if you don't [want] him, just trade me. If you want me just... He just goes with the flow.

Etan Thomas: Let's talk about when he came back and addressed the team and said that he wasn't mentally ready to play. And I know what you're thinking, but I felt that honestly, and this was my opinion. I felt that was him being honest with them and saying not that he had mental health issues, but he basically said: Mentally, I'm not ready to come back and mess with y'all. And I thought that was a very smart move on his part because of a lot of reasons; because he could have came back and you don't know what he would've done. If he would've came back, and I'm really still beefing with you, like I'm still thinking in my mind that you threw me under the bus over here after the game and I'm looking at you — I might just crack you across your head with a chair.

So he's telling you, Listen, I'm telling y'all right now I'm not mentally ready to come back here with y'all. You know what I mean? And now, everybody else jumped to, "Oh, he is using mental health issues and excuse." ...But he didn't say mental health. He said he's not mentally ready to come back. And the part that I do have to say — because I'm critical of the media a lot — I did see where Shaq was on a few nights ago, and he said he had to backtrack some of the criticism that he had and educate himself on mental health issues. Even though that's not what Ben Simmons said [or meant]. But [Shaq] said, "I had to backtrack, and I am not going to bash him or anybody else that are dealing with different things and getting their mental health issues correct on the same line."

And that's what Shaq said, "So I'm backing all the way off." I got to respect that, you know what I mean? Because it means that he's going back and saying, "Okay, I was wrong for what I said earlier." I wish Stephen A. Smith would do that because when he got on — everybody remembers right after it happened — it was reported that that Ben Simmons said that he couldn't come back because he wasn't mentally ready to come back. Stephen A. Smith went right on, and he went on this big rant like he always does. [Smith] said, "Why didn't he say anything about mental health before? Why didn't he say this before? Why all now?"

And so he's questioning publicly, on the biggest platform in the basketball world, the validity of what Ben Simmons was saying. So that, in turn, made a lot of people then start repeating what Stephen A. Smith said. And they were literally quoting him. And I think that's where the media has a responsibility to not attempt to sway the public against players. And that, again, going back to what Kwame Brown's point was and his issue was. It was not just Stephen A. Smith, but the media in general, when they do that. So what was your take on when [Simmons] said he was mentally not ready to play?

Gilbert Arenas: Okay, so you got to understand where the ESPNs and all these guys stand. That's their job to sway the public. You got to remember: They don't need the athlete. They don't need us to report about us.

Gilbert Arenas: Right? So they don't need us. So it's like, "I can say you're good. I can say you're bad. But I don't need to have a conversation with you to do that." So these guys in the media don't need the athletes. So they don't need to talk to Kyrie [Irving] and Kevin Durant, but they get to report on them all the time. Half of these reporters couldn't even get a sit-down with these players at this point in their careers. You have bashed these guys for so long that they don't want nothing to do with you, but it's still going to make your point against them. Charles Barkley go up there and Shaq and talk about prima donnas: "Y'all are too soft on these guys."

Etan Thomas: Yeah, I hate that.

Gilbert Arenas: First of all, Shaquille, didn't you push to get a trade from Orlando because a guy got more popular than you? That's prima donna. I want to move because he got a Penny [Hardaway] doll? I've seen your commercials back in the day where the Penny doll was on the couch and you slapped it off. Now, you guys are bickering. I was a Penny fan. That is bickering. That is babying. So the things that some of the older guys go at the young guys, I'm like, you did the same exact thing, so you know how he feels. So since you know how he feels, you should be able to help him through this process because you know what's going to actually happen at the end of this.