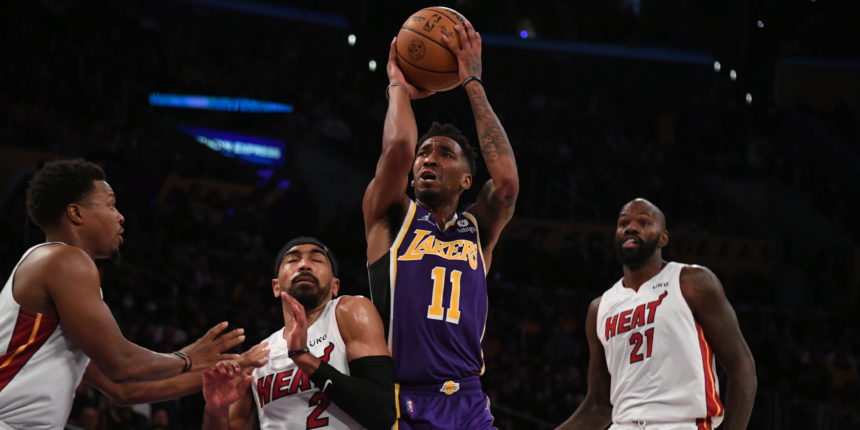 Lakers rally late in regulation, hold off Heat 120-117 in OT

LOS ANGELES (AP) — Malik Monk scored five of his season-high 27 points in overtime, and the Los Angeles Lakers rallied from a big deficit in the final minutes of regulation before surging in overtime for a 120-117 victory over the Miami Heat on Wednesday night.

Russell Westbrook had 25 points, 14 assists and 12 rebounds for the Lakers, who improved to 2-2 while LeBron James is sidelined by a strained abdominal muscle.

Monk put on an impressive shooting display with four 3-pointers, and Anthony Davis had 24 points and 13 rebounds for Los Angeles. The Lakers trailed by nine in the fourth quarter before rallying to beat the Heat, who had won six of eight.

Bam Adebayo scored 28 points before fouling out and Kyle Lowry had 18 points and 11 assists for the Heat, who lost Jimmy Butler to a sprained right ankle in the first half. Butler scored seven points while playing the entire first quarter, but didn't return for the second.

Herro also missed a 3 with 23 seconds left in regulation, but P.J. Tucker threw down a tying rebound dunk. Westbrook missed a jumper and Davis missed the tip at the buzzer, sending the Lakers to overtime for the second straight game.

Los Angeles jumped to a five-point lead in OT while Miami missed six of seven shots. Adebayo trimmed the lead to 119-117 with 23 seconds left before fouling out, and the Heat forced a five-second violation by the Lakers on the ensuing inbounds play — but Herro missed an off-balance 3-pointer.

Carmelo Anthony hit one of two free throws with 6.5 seconds left, and Herro missed again to end it.

Avery Bradley scored 17 points with a season-high five 3s for the Lakers.

Roughly 13 months after the Lakers beat the Heat in the 2020 NBA Finals in the Florida bubble, the Heat showed much more cohesion than the former champs until LA's stirring late rally. The Lakers have jettisoned all but three players from their title team — and of those three, only Davis was healthy for this meeting.

Miami’s Markieff Morris sat out against his former team with whiplash stemming from his altercation with Denver’s Nikola Jokic on Monday.

Heat: Adebayo, Tucker and Herro all played despite nagging injuries. ... The Lakers played a video tribute to Morris and his role in their 2020 championship run during the first timeout.

Lakers: Dwight Howard fouled out with 8:50 to play. He didn't take a shot in 11 minutes. ... Kendrick Nunn spent his first two NBA seasons in Miami before signing with Los Angeles in August, but he has yet to debut for his new team while dealing with a bone bruise in his right knee. ... Austin Reaves and Rajon Rondo both sat out with hamstring strains.

Westbrook had his second straight triple-double and his third with his hometown team. He extended his NBA record to 187 triple-doubles and scored two huge baskets in the final minute of regulation, but also committed eight turnovers and missed the probable game-winner in regulation.

Thanks to foul trouble for Adebayo and Dewayne Dedmon in the first half, Udonis Haslem played a season-high five minutes in the 41-year-old big man’s third appearance of the season for Miami. Turkish big man Ömer Yurtseven also got four minutes in his most significant action of the year.

Haslem had played only five minutes this season, and Yurtseven had played just 22.

Heat: At the Los Angeles Clippers on Thursday.