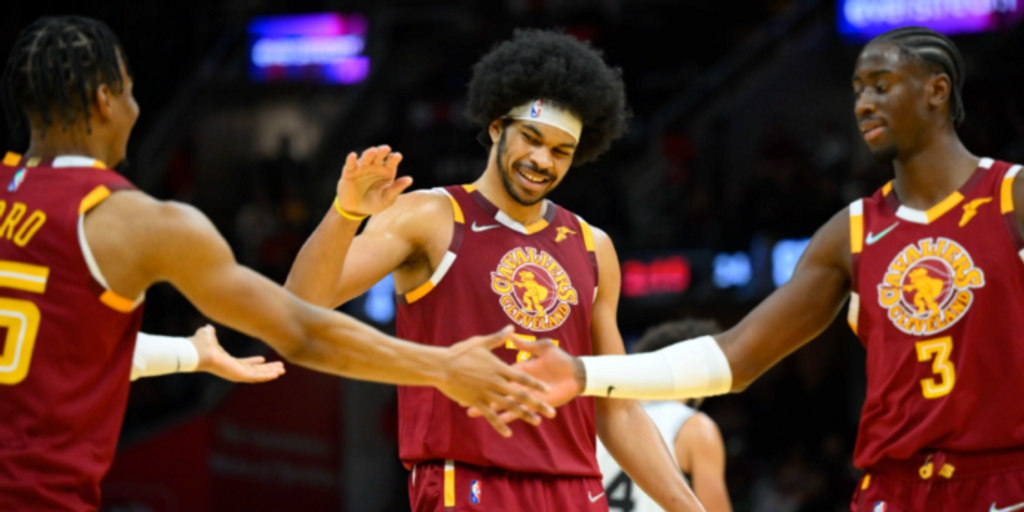 Recognizing the Cavs for who they were, could've been and may soon be

This year has been a great reinforcer of the enjoyment of the process. The NBA season is 82 games, far more than many fans and observers alike would like there to be, and I can't blame them. (For the sake of player health and longevity, I'd love to see the season shortened.)

After a close loss to the Atlanta Hawks on Friday night in the Play-In Tournament, the Cleveland Cavaliers were ousted from the playoffs entirely, meaning their season had come to an end.

"End? No, the journey doesn't end here. Death is just another path, one that we all must take."

- Me watching the Cavs

Pull up Basketball-Reference, and you'll find the Cavs with a 44-38 record and the No. 8 seed in the Eastern Conference. A solid record at the end of the season. A good one even, if taking the past year into account. I was of the opinion that the Cavs might jockey with Play-In positioning at points this year, but ultimately would fall short of being a playoff team and take a meaningful few steps as a young squad.

That's what makes the regular season so precious to me. Watching the game-to-game, week-to-week evolution of this group was a special endeavor this year. I relish growth, persistence and consistency; the Cavs met all three needs with gumption. This is not a "watch the games bro" take, but rather an "I'm so thankful I got to watch the games bro" exclamation. Deducing what this team was this season down to its final record is a disservice.

Just 11 games in, the Cavs lost Collin Sexton for the season. A month-and-a-half later, they lost sixth man and backup point guard Ricky Rubio as well. You might look at his efficiency or lack thereof and question his impact, but Rubio gave the Cavs' bench a verve that they were never able to replicate.

All three frontcourt starters missed significant stretches of time, with Jarrett Allen's finger fracture throwing the team into a tailspin shortly after the All-Star Break

None of the primary starters this season played 70 games.

This was a team that was 35-21 a week before the break festivities in Cleveland, legitimately fighting for (and maintaining) home-court advantage in the playoffs for a significant stretch of the regular season.

The way the Cavs got there was even more enticing.

The first time I saw that J.B. Bickerstaff was starting Lauri Markkanen at the 3, I was vexed. I understood why, but thoroughly questioned its viability. Even prior to that, I was extremely critical of the Markkanen sign-and-trade in the offseason. Well, I was just flat-out wrong!

Big
to
Big
to
Big pic.twitter.com/5WlMaBYmoe

The three-7-footer lineup the Cavs started and leaned upon as their bread and butter all year was a delight. The big-to-big-to-big passing was joyous and impactful. It will be interesting to find out whether teams try to replicate a jumbo lineup without capturing the essence of why it worked. Having three players who all have size, mobility and skill is not an easy combination to find.

Markkanen's offense was up and down at times this year, but his defense should be lauded. He was a very rough defender his whole time in Chicago, and I was taken aback early this season by his effort and attentiveness — which never really waned by my eye. His game against Atlanta was phenomenal, even if marred by a late game turnover. Again, process, process, process.

Jarrett Allen earned an All-Star nod through his all-around improvements, becoming a legitimately switchable big man and the anchor of the Cavs' defense in the paint as their primary rim-protector. The offense really suffered without his gravity as a roller and his screening ability when he was out. He found new levels of aggression that he flashed late last year, and made it a consistent staple this year.

Allen's presence and Markkanen's strides allowed Evan Mobley to assert himself. His ground coverage is breathtaking, and it enabled a ridiculously aggressive, effective and quirky 3-2 zone to bend the court dimensions to the the Cavs' will.

It should not be possible to cover the rim to the arc the way he does, but Mobley just does.

The flashes he showcased throughout the year as a face-up scorer and passer were wild, and lend credence to his exciting future as one of the brightest young stars in basketball.

I won't quibble with anyone who voted for another first-year player as Rookie of the Year; there are so many different ways to view, appreciate and evaluate the game. This rookie class is incredible. I am still there with Mobley winning it.

Darius Garland quite literally was Cleveland's offense at points this year when the team was depleted. His off-the-dribble ease and marksmanship open up his game as one of the best passers in the sport. In spite of the finish to the year, he and Allen were rightful All-Stars at the time. Garland's growth over the past two years, along with Mobley's ascension, provides the foundation of one of the more intriguing young cores in the NBA. There's still a great deal for the pair to grow both individually and together!

Kevin Love had an awesome bounce-back season, warranting Sixth Man of the Year buzz before the Cavs (and he) tailed off down the stretch. Cedi Osman is still an absolute bundle of chaos, but Cleveland was better because of him, putting together his most efficient season since his rookie year.

The Cavs will keep their first-round pick in the 2022 NBA Draft (14th-best odds), as the pick will not convey to Indiana due to lottery protections (part of the Caris LeVert trade). Given how the season ended, this is a silver lining. Cleveland needs wing depth and more shot creation.

I wrote about Isaac Okoro and his impact earlier this season, highlighting the little things he honed in on to imprint himself on both ends. He played 34 minutes combined in the two Play-In matchups and took 6 shots. I don't have an answer now — it's something I want to dive into further in the offseason — but the Cavs really need Okoro to make significant strides as an offensive player.

I do think some have been too quick to cast off the positive things he has done and what he can provide, but Okoro's current limitations were put on display in those contests. If he runs ball-screens, the defense goes under and forces a pass-out-and-reset or a shot off the dribble. If he's spaced off the ball, he's left open in the corner. The defense is really, really good, but the offense needs to come along.

Speaking of offense, the Caris LeVert trade was made with the purpose of bringing in another shot-creator and offensive engine. I am so interested to see what happens between LeVert and the Cavs this off-season.

I understood why the Cavs made the trade at the time, going in on this season to try and make a real playoff run without fully hindering their intermediate future and flexibility. I just really struggled to be into the move from a personnel perspective, and I'll have even more questions once/if Collin Sexton returns next year.

I have no idea what to think about Sexton's future in Cleveland. He is a really good player with some flaws that can be a bit exacerbated playing alongside another small guard. His numbers were down and his shot wasn't right to start the year, but he was playing some of the best team basketball of his career to start the year. I don't know what the answer is for Cavs president Koby Altman, general manager Mike Gansey and the front-office brain trust, but they have a lot of decisions to make over the next few months as they continue to shape this team.

Hard decisions are a good thing! To look at where the Cavs were two years ago at 19-46 with questions about their infrastructure to where they're at now... that's pretty good!

The way they handle those head-scratching conundrums over the summer will ultimately mold their future playoff aspirations and viability. The 2021-22 Cleveland campaign was one of the more unexpected and exciting runs that had some unfortunate road bumps.

But the point remains that the future of the Cavs is much brighter today than it was eight months ago, and where this team is at by this time next year will have been set up by the trials and tribulations of this year.