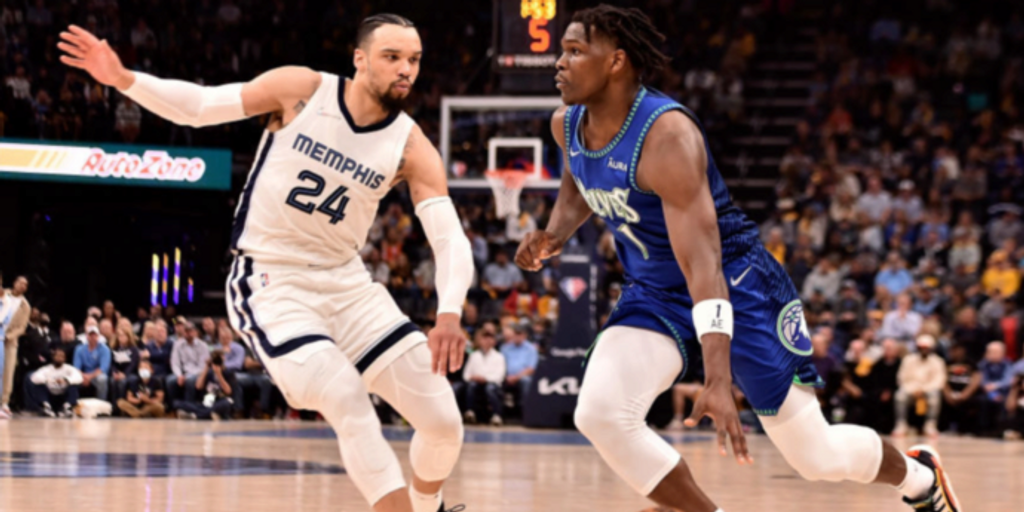 Anthony Edwards scored 36 points in his postseason debut, and the seventh-seeded Minnesota Timberwolves stunned the No. 2 seed Memphis Grizzlies 130-117 on Saturday to grab home-court advantage in the opener of their first-round Western Conference series.

The Timberwolves, fresh off beating the Los Angeles Clippers in the play-in game, won their first playoff opener since 2004. That's when they beat Sacramento in the first round on their way to the Western Conference finals.

Game 2 is Tuesday night in Memphis.

Memphis tied the franchise record by winning 56 games in the regular season and earning its highest seed ever. The Grizzlies had a packed FedExForum for only their third Game 1 in Memphis. But they struggled early after a week off and led only twice by two, the last midway through the second quarter.

In this matchup of the NBA's top-scoring offenses and two of the league's youngest teams this season, the Timberwolves set franchise records for points in both the first quarter and the game. They also stymied Memphis with their 3-point shooting, rebounding and defense.

The Timberwolves looked like a team that played Tuesday night needing a win to clinch its seeding. They opened with a 9-2 run and led by as much as 13 before a 41-33 lead for the franchise’s highest-scoring first quarter in the playoffs.

Timberwolves: They topped the 121 points scored April 21, 2018, against Houston in the only game they won that series. Their first quarter topped the 32 points scored May 23, 2004, in Game 2 of the Western Conference finals. ... Towns had his 43rd double-double of the season. ... Russell had five assists in the third quarter. But he was 2 of 11 shooting for eight points after having 37 in his last game against Memphis in February.

Grizzlies: Jackson set a franchise playoff record with seven blocks through the first three quarters. That topped the six blocks by Marc Gasol on May 13, 2013, against Oklahoma City. ... Clarke had his fifth double-double of the season. ... Jackson and Steven Adams combined for seven rebounds.

A woman chained herself to the basket stanchion and stopped play with 4:44 left in the second quarter. The woman wore a blue shirt, making clear she was with the animal rights group protesting a Minnesota co-owner’s factory farms, the same situation as the woman who glued herself to the floor in the Timberwolves' play-in game earlier this week.

The woman, who was not from the Memphis area, had a chain and attached herself to the back of the basket closets to the Timberwolves’ bench. She was taken to the back and removed from the arena after security personnel removed the chain from around her neck.

Game 2 is Tuesday night in Memphis.