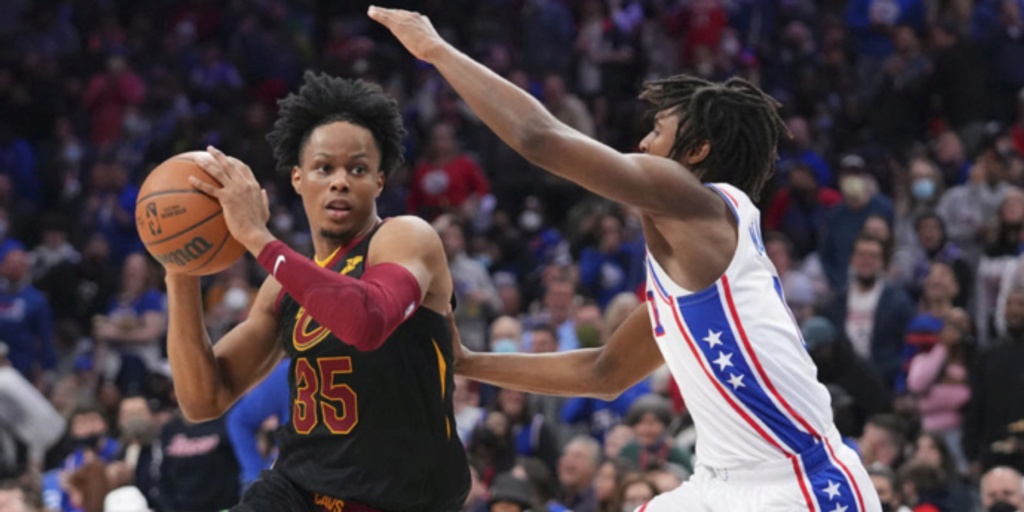 Enjoying the NBA's little things so far this season

The 2021-22 season is entering the homestretch, with roughly 20 games to go per team and the playoffs slated to start in less than two months (What?!).

Maybe it's just from the extended break, but the last few weeks have felt particularly rife with frustration and criticism from all parties in the league. It's important, for instance, to be critical, think in-depth and discuss the ins and outs of award voting. That's part of the media job and part of talking about the NBA! However, I've felt routinely bogged down by some of the discussions lately.

When it comes down to it, I just want to enjoy the league, get myself down into the minutiae, bask in the fleeting moments of this season and appreciate some of the things that have consistently brought a smile to my face or warmth to my heart this season.

So, without further ado, here are some things I've really enjoyed throughout the season that I want to give some shine!

The Cleveland Cavaliers have been one of the darlings of the NBA this season, stunning the majority of analysts and league personnel with their stellar play. Evan Mobley is going to be a star. Jarrett Allen rightfully earned an All-Star nod after some massive improvements across the board. Darius Garland stirs the drank like few in the league. Kevin Love has a claim to Sixth Man of the Year!

This team just jibes in so many ways. They've kept their heads above water through rough stretches with injury and difficult patches in their schedule. A good team!

Isaac Okoro, the fifth overall pick in the 2020 draft, does not grab the headlines. His box score is roughly the same as last season.

Yet he is central to what the Cavs do. He papers over so much for Cleveland in a way that isn't always palpable, but when he's not on court, it's just kind of like "ohhh ok, I get it now."

Okoro isn't treated like a shooter, and rightfully so — he's shooting 30.2% from deep in his young career. Earlier in the season, he tried to gun his way through it at times, hoisting up open threes. At other times, he'd immediately drive an open look from the perimeter towards the rim. The balance never felt right. However, in 2022, he seems to have found that groove — becoming more comfortable toggling between driving and keeping defenses guessing. He's hitting 33% of his threes in 2022, on slightly over two per game. For where he's at right now, it's good enough.

To supplement that, he's been incredibly assertive as an off-ball player, timing cuts well when the defense helps off of him.

He's a menace floating baseline, either off 45 cuts when the nail defender ball-watches, or flying in from the key to snag offensive rebounds.

Isaac Okoro is so good at just being in the right place at the right time. He's really found his place in Cleveland's offense in spite of some limitations he has rn

Okoro has such a great nose for the ball. He never seems to pause once the ball goes into action, and uses that advantageous extra split-second against the defense.

He's pushed the issue more in transition off of defensive rebounds to bring a different dynamic to the Cavs' offense (21st in transition frequency per Cleaning the Glass) and self-create easier baskets.

He's found ways to meaningfully impact winning as a second-year player in a way that most upper lottery picks aren't asked to do so early. I don't know what to think about his trajectory (a future article!), but it's clear that right now he's a vital cog in Cleveland's present and future. The playoffs will be a huge test for him and the Cavaliers, but I see it going well for him, as a guy who just makes it work.

I really didn't enjoy watching the Dallas Mavericks play early in the season. I found their offense pretty drab, the defense was blah, and execution all-around felt off.

I was way too unfair and overly critical. Jason Kidd has really impressed me this season — the Mavs are a top notch defensive unit, and Luka continues to be one of the brightest stars in basketball. Jalen Brunson has taken another step and remains an absolute joy with his footwork and craft.

Often, it seems as though that's where the conversation ends (especially with Kristaps Porzingis now gone), and that's a shame!

Dallas does lack a true second star, but man, they have some incredibly effective and endearing role players — Dorian Finney-Smith is having a fantastic season! He's a very solid defender, both on and off the ball, but I've been more impressed with his offensive growth this season.

When he came out of Florida, he was a relatively shaky shooter and didn't shoot around league average until his fourth NBA season (38.1% on around 5 per game over the last three seasons). He started to put together more drives last season, attacking off the catch. Possessions could occasionally die if he was closed out on and then forced to put the ball on the deck.

Not the case anymore!

He can hit the corner if the tagger comes, or find the dunker spot if the defender steps up. He's not going to ignite the offense, but he can keep it circulating.

Meanwhile, Maxi Kleber is always a delight as a defensive player — probably the best individual defender on the Mavs and a fringe All-Defense candidate.

He just defends everyone, and he does it with conviction. Per Basketball Index, he rates in the top 5% of their defensive role versatility metric and top 7% in positional versatility, a testament to his utility.

He possesses great lateral quickness for his size, but his timing stands out even more. Kleber is adept at contesting shots, disrupting windows with gumption. He's solid on rotations and as a help side shot-blocker.

Jason Kidd has utilized Josh Green as a screener and more of a turnkey in the team's offense, letting him thrive on the margins rather than forcing him into a smaller role as a theoretical spacer just for the sake of theoretical spacing. He's brought a vertical element the team really lacks and his rugby background pops with his physicality. Small screeners can still screen effectively, and Green is living proof!

He has good court vision and ability to get off passes on the short-roll. He has decent touch on floaters, and while his jumpshot is mostly a pipe dream at the moment, I see the vision. Buy Green stock!

Dwight Powell has found some of the lift he lost and has been more serviceable in Dallas' revamped defensive system.

Reggie Bullock is such a quality defender and, after one of the worst shooting slumps I've witnessed in some time, he's shot 43% from deep in 2022.

The Mavs are certainly built around Luka Doncic, but the players around him are more than they tend to get credit for.

There are few players in the league I enjoy watching operate more than Oshae Brissett of the Indiana Pacers.

This one play may be the best 14 second summarization you'll ever find of a player.

Brissett is a tremendous opportunistic scorer, always opening himself up to easy looks and as an outlet for teammates (The Haliburton-Brissett combo is ENTICING).

He times the cut as soon as help is committed, but Patrick Beverley makes a late rotation and recovers to tip the ball.

Brissett tosses himself out of bounds to secure the ball and throw a mid-air pass back to Buddy Hield, who's wide open in the corner. Many a player makes this play and then floats under the rim, but Oshae immediately relocates to the corner.

The ball keeps moving around the perimeter. Swing-swing, and Oshae hits a wide-open three on a possession that wouldn't have already been over if he hadn't made an extra effort.

Keep him in mind when thinking about Indiana's future.

An appreciation of facial wear

Lu Dort is already one of the most revered point of attack defenders in basketball. Add on the mask and I'd like to think he gets a +4 to all defensive attributes, like when you put on new armor in a Bethesda game.

Dort can never take the mask off ever again man, this is freakin sick pic.twitter.com/08zAiZA3IA

Wendell Carter Jr. donned the goggles and hasn't looked back, ascending like the hybrid combo big that was promised.

“I was born in it, molded by it. I didn't see the light until I was already a man, by then it was nothing to me but BLINDING! The shadows betray you, because they belong to me!”

Wendell is now the chief member of goggle gang. pic.twitter.com/YEVXzmOUYt

I don't care what his true-shooting percentage is, he has literally never missed a jumper when he has glasses on.

Clippers foil the Lakers comeback with a 1-point WIN 💯pic.twitter.com/9NhHrvHBaK

I'm all in on eyewear, and players who feel the same have profited heavily this year!

Jeff Green is in the midst of his 14th NBA season, which is an absolute trip to type. Fun fact: he has never played less than 20 minutes per game in a season, and that doesn't look like it'll change this year. He's started the majority of the season with the Nuggets, and has continued to be a pretty darn solid pro.

His defense has ... uhh ... been lacking, but he continues to do what made me fall in love with his game as a kid: ripping the rim with dunks.

He's second on the Nuggets this season in dunks with 48, his highest total mark since the 2017-18 season with the Cavs. His career dunk reel is insanely underrated if you have 10 minutes to kill.

Green has thrived in Denver's offense, playing off of Nikola Jokic as a cutter and roller.

The bounce he still has, the consistency with which he exhibits it, and some of the contact finishes he continues to put on tape are just absurd at this point. I've really enjoyed his season and the stability he's found as a role player later in his career.

I really liked Quentin Grimes at Houston and thought he had a real place in the NBA. That being said, I am routinely taken aback by his on-court impact in this, his rookie year.

On a team that's struggled to meet expectations, he's surpassed all of mine. The shot from deep has been money. He's intrigued attacking off the catch with some interesting flashes of live-dribble passing.

The defense, oh man the defense.

There just are not many players in the world who can move their feet the way Quentin Grimes does when he's sliding at the point of attack.

He sheds screens like mad, seemingly refusing to let the ball leave his area of effect. The way his feet move is rhythmic, a controlled-yet-maniacal pace that I find mesmerizing.

One of my favorite things to do at night is take a few minutes to tune into a Knicks game just to watch Grimes muck it up on the perimeter.

Fun and awesome things are happening all around us in the NBA. Sometimes, I really need to take a step back and go "hey, it's pretty cool the way Ziaire Williams just sprints to the corner," acknowledge the absurdity that is DeMar DeRozan's season without taking stock of his MVP odds, and appreciate the other great things that may have become commonplace. Basketball is a special sport. Reminding myself why I love it everyday makes me appreciate it even more.