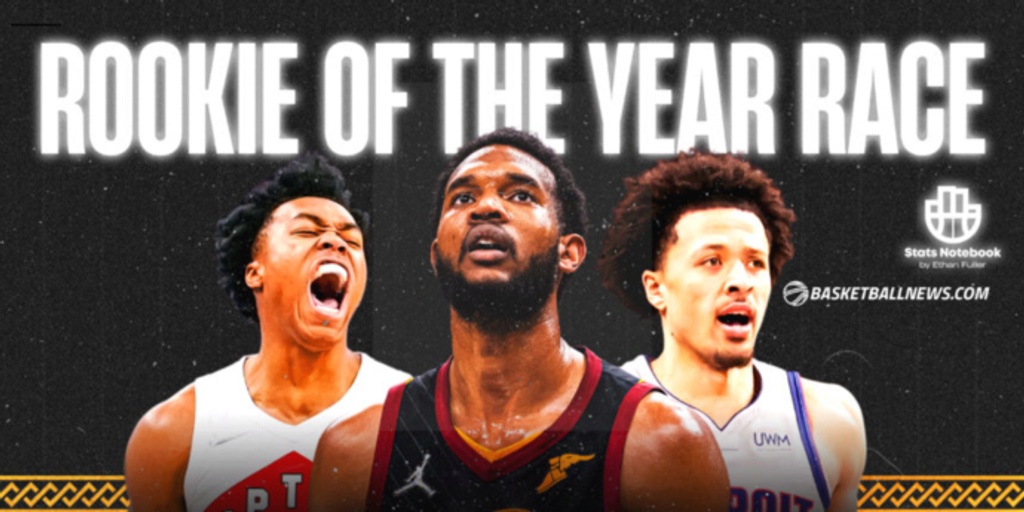 NBA Stats Notebook: Fighting narratives in the Rookie of the Year race

Is every NBA individual award still up for grabs?

Nikola Jokic, Joel Embiid and Giannis Antetokounmpo seem to one-up each other every single night in the MVP hunt. Suns head coach Monty Williams might be the front-runner for Coach of the Year, but Taylor Jenkins, Erik Spoelstra and Ime Udoka surely have cases. The battle for Most Improved Player is as wide-open as the criteria for the award itself. Perhaps the only trophy settled is Sixth Man of the Year, with Tyler Herro's latest 35-point outburst on Tuesday hammering another nail in the coffin.

Then, there's the Rookie of the Year race. The general consensus is that Scottie Barnes, Evan Mobley and Cade Cunningham have separated themselves from the pack. Yet, the factions for and against each rookie are building their walls as the three continue to raise their games in the spring.

If you find yourself facing some overblown talking points about your favorite Rookie of the Year candidate, I've rounded up some numbers to help you oust and dispel some discourse circling around NBA conversations.

The narrative: Is his role big enough?

This is some garbage of a narrative anyway, but it feels like Barnes' case gets dimished because fans view him as a cog of the Toronto Raptors rather than a pillar. No, Barnes is not a one-way engine like his award competitors, and yes, he plays on a team with a superstar in Pascal Siakam, an All-Star in Fred VanVleet and a rising star in OG Anunoby. But Barnes' role in Toronto's surge to the Eastern Conference's top-six has been instrumental.

Since the All-Star break, Toronto has a clear Big Three in terms of passes per game: VanVleet (57.2), Siakam (55.6) and Barnes (54.2). Barnes ranks third among all rookies in passes per game on the season and first since the break — even ahead of Cunningham.

Though Barnes has a comparatively low usage rate (18.8%) to his peers, this metric doesn't fully capture his involvement in the offense because it only incorporates play-ending events: shots, assists and turnovers. Furthermore, Evan Mobley is the only other rookie in a similarly-significant role for a playoff contender.

Then, on defense, Barnes takes on some of the heaviest loads of any player in basketball. In fact, he has the single-highest positional defensive versatility score of any player in BBall Index's database for this season.

The No. 4 pick contests over 37% of opponents' at-rim shot attempts when he's on the court; that ranks in the 89th percentile at his positional group. BBall Index lists his most frequent opposing matchups as "versatile bigs," "off-screen shooters," and "slashers." Barnes is integral to a Raptors defense that is top-10 on the season, and per Cleaning the Glass, it's No. 1 over the past two weeks.

Has he been as good of an individual defender as Mobley? No, but he's been pretty darn good for a rookie with a serious burden.

Barnes'  impressive counting stats — including 17.8 points, 8.0 rebounds and 3.8 assists per game with six double-doubles since the All-Star break — and Toronto's team success have put him in the race. His high-level finishing and rebounding rates give him another boost. Don't paint his success as a product of Toronto's balanced lineup, because that tosses aside the huge responsibility on the young forward's shoulders.

I wish we had this from the bench view but COMPLETELY moves Brunson out of the way to get Stew an easy dunk #Pistons pic.twitter.com/aggrjsYtlY

The narrative: Does he impact winning enough?

Well, the Pistons are 10-12 since the All-Star break, and 8-11 in those games when Cunningham plays with a young, poor-shooting, inexperienced roster, but let's add some more proof.

I'm generally not a huge impact-estimator fan, so we're going to skip the PERs, VORPs and Win Share stats of the world. What I do trust as noteworthy is that the Pistons are 5.5 points per 100 possessions better with Cunningham on the floor this season, per Cleaning the Glass.

Cunningham has created 27.8% of his team's assists, which is in the 99th percentile at his position. Approximately 13.3% of his passes have become assists; this ratio is 44th among 282 NBA players and in the ballpark of guys like LeBron James, Marcus Smart, Fred VanVleet and Nikola Jokic. That assist-to-pass ratio is up to 15.0% post-break, putting Cunningham 31st out of 331 qualifying players. Both rates are second among rookies behind only Davion Mitchell.

The top pick carries a ridiculous amount of weight as a creator in Detroit's offense. Cunningham is averaging 16.2 drives per game this season. Only 23% of his made field goals have come via assists, and only 37% of his total shots were assisted — both in the 97th percentile or higher at his position.

Even with his efficiency peaks and valleys, Cunningham has massively catalyzed one of the worst-shooting squads in the NBA and helped them reached competitive play. And if folks are still hung up on Detroit's overall record, remember that 2 of the last 12 ROTY winners have been on teams over .500.

The narrative: Was his second half good enough?

Mobley was the a clear-cut best rookie through the first half of the season, so critics have resorted to focusing on his second half. And we don't need to sugarcoat that Mobley has struggled relative to his first half, plus he's missed the last five games with an ankle injury. However, he's still been a phenomenal rookie and overall player without his partner in crime, Jarrett Allen, for a large portion.

Since the All-Star break, Mobley has contested a whopping 9.2 shots within 6 feet of the rim, second only to Nikola Jokic. Opponents are shooting 61.8% against him — tied for 34th among 68 players (and second among rookies, behind Cunningham) — contesting at least five such shots per game. Is it a downturn from his 49.1% opponent clip (second in the NBA) from before the break? Sure, but it's still a very solid number for a rookie, and again, Mobley has had to take on different roles without Allen.

His post-break per-game counting stats include 15.1 points, 8.8 rebounds and 1.6 blocks per game. Mobley is receiving 8.4 paint touches per game, good for ninth in the league, and shooting 68.8% in the paint. These numbers aren't like the massive improvements we've seen from Cunningham and Barnes, but they're still very healthy totals.

To say that Mobley's late-season challenges have taken him out of the race is both untrue and lacking context. He's been tasked with so much more on a Cavaliers team that has struggled on the whole, and Mobley's still treaded water. Plus, it makes little sense from a philosophical standpoint to apply more weight to his "second half" (which isn't truly a half of the season) more than his dominant first half.

We gotta talk about how Keon Johnson is hitting half of his pull-up threes post-ASB and 38.2% of his total threes with the Blazers.