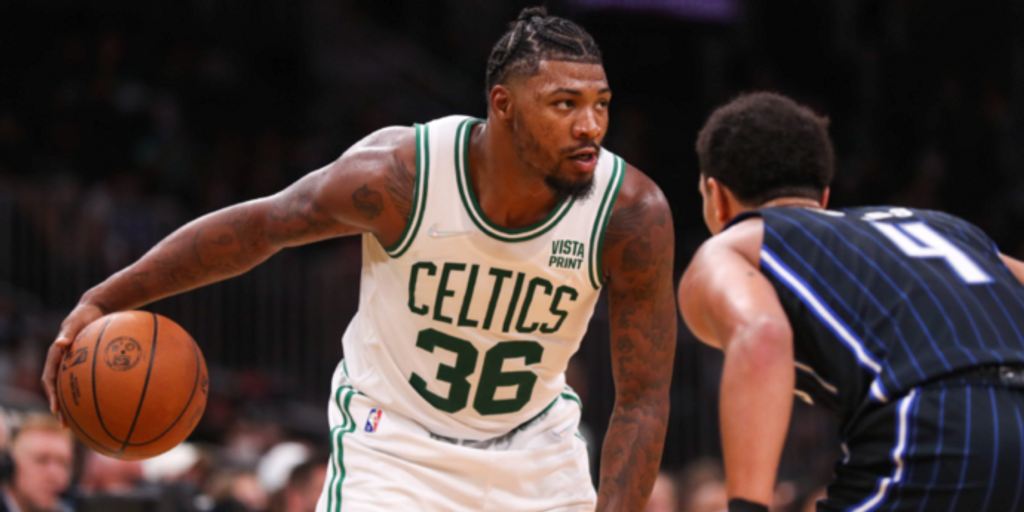 What does Marcus Smart at point guard look like for the Celtics?

Perhaps the most significant change with this year's Boston Celtics comes from the team's one constant.

Marcus Smart is Boston's longest-tenured active player. Since joining the franchise as the No. 6 pick in 2014, Smart has watched the lead-guard torch pass from Rajon Rondo, to Isaiah Thomas, to Kyrie Irving and to Kemba Walker, while he settled in primarily as an off-ball guard.

Now, in his eighth season, Smart is poised to take that mantle. Sure, Jayson Tatum and Jaylen Brown will drive the offense and the team as a whole. But Boston's heart and soul appears to now be its primary table-setter, a role Smart hasn't been entrenched in since his college days at Oklahoma State.

This means Smart assumes new responsibilities as a communicator, playmaker and creator. It's an interesting fit for one of the best all-around defenders and streakiest shot-makers in the NBA.

After a practice this past Wednesday, new Celtics head coach Ime Udoka said that he doesn't want to micromanage an entire game, and specifically mentioned Smart as someone who has done a great job arranging the offense in training camp.

"I like to give the players freedom to be coaches out there, and I feel Dennis [Schröder] and Marcus have done a great job throughout camp," Udoka said. "I try to come down and call plays since they know the package we have off of makes and misses. But I'll get up and mention a coverage or call out a play if I have to."

Udoka also mentioned that he specifically brought assistant coach Damon Stoudamire aboard to work with Smart this season. Stoudamire played 13 seasons as a point guard in the NBA and was previously the head coach at Pacific University.

Evidently, Udoka and the Celtics are investing in Smart's development as a floor general. Positional data from Cleaning the Glass estimates that Smart has played at least 60% of his seasonal minutes at shooting guard in each of the last six years. Futhermore, 2020-21 was the only season in his career that the 27-year-old spent more than 20% of the time at point guard, and that was likely boosted with Kemba Walker's injuries.

So this is new professional territory. What can the team and the fans expect on the offensive end?

While Smart's responsibilities might change, his total usage likely won't. Jayson Tatum and Jaylen Brown exist, and Al Horford's return — coupled with Schröder's acquisition — adds some new ball-movers to the mix. Make no mistake, though: Smart is assuredly the best passer on Boston's roster.

BBall Index has developed advanced metrics for all sorts of passing attributes using tracking data. In seven of their 11 "playmaking" categories, Smart placed in the 80th percentile or above. That includes measurements such as Passing Creation Quality (whose passes lead to the best quality of shot), Passing Versatility (who has the greatest range of passing types), Points from Assists per 75 possessions and the site's overall "Playmaking Talent" grade, in which Smart was in the 90th percentile.

In essence, these stats claim Smart is a malleable playmaker who can hit teammates in all sorts of situations. He averaged a career-high 5.7 assists per game last season. The tape backs up the statement:

In the footage, we see: an on-target bounce pass, a one-arm toss to the weak-side corner, two beautiful alley-oops and an aggressive hit in transition. Smart's court vision is apparent. He has a vet's knowledge of the playbook and can also push the pace.

That buzzword, "pace," has become a preseason theme for Boston. We saw the Celtics speed things up in their preseason opener against the Orlando Magic and again versus the Toronto Raptors. Though the pace led to some sloppy turnovers, there were a few moments I liked with Smart, including this play:

It's nothing crazy. Smart flips the ball up to Brown and follows the pass as he and Robert Williams set up a double screen. It gets Brown running on the perimeter, and with Wendell Carter Jr. defending in drop coverage, opens up a three-point attempt. This is how Boston should intend to play with pace: by catching the defense off guard and putting Brown and Tatum downhill in advantageous spots.

The Celtics also frequently used Smart as a screener against Orlando, which makes sense given his physical 6-foot-4 frame. He typically returned to his traditional off-ball role whenever Schröder or Payton Pritchard shared the floor. I'd expect this to continue into the regular season.

Now, let's get to the scoring, which has drawn the ire of Boston fans since Smart entered the league. He's a wild card of a shooter, and while I think it's an overblown concern, the fact remains that his 32.2% career clip on catch-and-shoot threes is... dead last among active players (min. 800 attempts). It is what it is at this point.

But the real concern, and the ultimate swing skill to me, is his rim pressure. Smart has struggled throughout his career getting to and finishing at the basket. According to Cleaning the Glass, 21% of the guard's field goal and free-throw attempts last season came from attacking the rim (29th percentile at his position), and he made only 49% of his field goal attempts (15th percentile).

Part of the problem was his role; Smart wasn't in position to attack with a ball-dominant guard beside him. But the 27-year-old relies heavily on brute force and touch to muscle his way to the hoop. He doesn't lean on a floater, and lacks explosiveness and leaping ability.

The silver lining is that Smart made solid playmaking decisions when he attacked. Per BBall Index, he passed out of drives 41% of the time, and 30% of those passes became assists — both healthy numbers. But will Smart intimidate enough to collapse the defense? Boston doesn't have many at-rim terrors on paper, so he'll need to step up (as do Tatum and Brown).

Saturday night showed promise. Smart posted 7 assists against just 2 turnovers in the Celtics' win over the Toronto Raptors, drawing praise from teammates for his aggressive play. He finished just 2-of-7 from the field, with many of those being missed shots at the basket. But he also showed what happens when he does pressure the defense.

"Tonight, he quickly realized that if he puts pressure on the rim, the way that we're playing, the defense is collapsing, so it was opening up shots for all of us." Horford said. "He did a really good job recognizing. The thing about Smart is, he justs adjusts to how they're playing; he just figures it out."

In many facets, we know what we're getting with Smart: an all-world defensive pest, a loose-ball magnet and a cerebral decision-maker. The team and fan base should also know they are not getting a ball-dominant, walking-bucket point guard in the vein of past Celtics.

Marcus Smart's offensive impact will be largely defined by how he sets the table for his teammates and how he feasts when the plate is for him. If the veteran can't pressure defenses and keep a fast pace, Boston may revert to its past scoring inconsistencies. But if things break correctly, Smart can unleash the point guard skills necessary for his teammates to thrive.