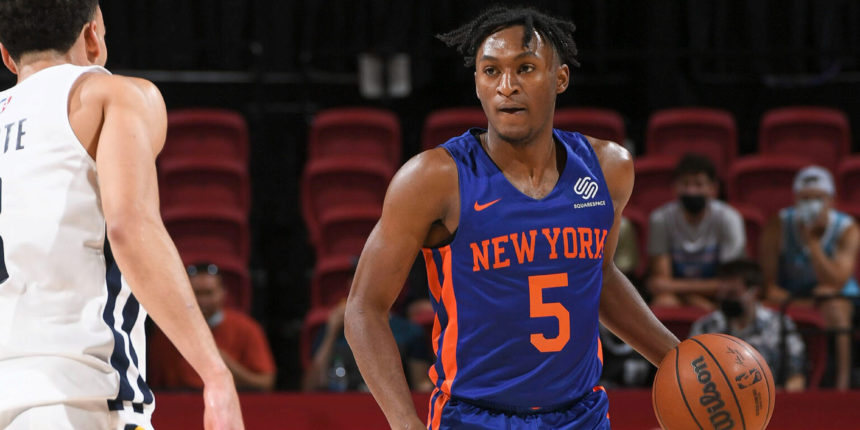 As NBA Summer League gets into a groove, viewers should notice some players quickly outclass the environment.

Experienced sophomores and third-year players often "graduate" summer league early. You'll know these players when you see them -- simply playing with pace and awareness well beyond the rest of the players on the court.

On Monday, some of these players popped up with monstrous performances. As we wrote yesterday, we've collected five "studs" and five "duds" and noted our observations from their individual games. Once again: this is not meant for drawing long-term conclusions. Rather, it sets a baseline for a prospect's strengths and weaknesses upon entering this next step up in competition.

On to the players:

Immanuel Quickley drops 32 PTS and 8 AST to lead the @nyknicks to the #NBASummer win in Las Vegas! pic.twitter.com/THXE64GJjX

Quickley piqued my curiosity on Sunday when the Knicks rolled him out at point guard. He did a much better job navigating the pick-and-roll on Monday, being more decisive with his passes and drives. The second-year guard attacked the basket and demonstrated an immaculate floater. His eight assists also came against just one turnover; he now has 16 assists and only four giveaways through two games. Quickley's offensive command was eye-popping, even when the jump shot didn't fall.

No. 17 pick Trey Murphy drops 26 PTS with 6 3PM in his @PelicansNBA debut! pic.twitter.com/kId4rXieF2

Murphy laid down the best summer-league debut from any rookie so far. He splashed threes facing up and off the catch, making open and contested looks. On the defensive end, he rotated properly and remained engaged, living up to the 3-and-D archetype that he projects into as a prospect.

But then Murphy did more. He consistently ran the floor in transition and served as a lob threat and finisher. He was unafraid to put the ball on the deck, and hit a cutting Kira Lewis Jr. on one particularly nice bounce pass. Honestly, there was very little to dislike, and Murphy's high bar makes him a prospect to watch over the coming days.

Yeah, Tyrese Maxey wasn’t doing this last year. Very promising development to see him seeking out his own perimeter shots. He’s already up to 19 points in the half. pic.twitter.com/V6xHdLEQuB

Maxey absolutely owned the Mavericks on drives. The 6-foot-2 guard slashed to the rim quickly and frequently for easy buckets. It shouldn't come as a surprise; Maxey has been burning defenders his entire basketball life.

The second-year Sixer also set the tone on the defensive end with on-ball pressure. Most notably, he looked confident attempting three-pointers, which is one key swing skill in his development. I'd also like to shout out teammate Isaiah Joe, who is not in this list, but who played a fantastic game of his own next to Maxey.

Desmond Bane (@DBane0625) scores 32 PTS to fuel the @memgrizz to the win at the MGM Resorts #NBASummer League 🔥 pic.twitter.com/5JSkJ2H7Dg

To put it bluntly: Bane has very clearly outgrown NBA Summer League. After making the All-Rookie Second Team in 2020-21, the scoring guard owned his first game of the tournament. Bane drilled six long-range looks, and his form is as crisp as ever.

Grizzlies head coach Taylor Jenkins said during the broadcast that he wanted to get Bane more reps as the primary playmaker. The 23-year-old ran the offense seamlessly and tossed some clean passes to the corners for open shooters. Bane's statement game was a plain reminder that he is a rotation staple for Memphis.

Suggs' defense was the story of the game in Orlando's 91-89 OT win over Golden State. The rookie point guard came up with a number of big-time blocks down the stretch, including a two-on-one stop that essentially forced overtime. Suggs hounded his matchups and played above his size, frequently seen on the floor in pursuit of a loose ball.

Offensively, it was a mixed bag. The efficiency numbers don't look great, but Suggs was able to get to his spots in the mid-range and navigate some pick-and-roll opportunities. This was a question mark for him pre-draft, so it's good to see a somewhat promising start as a lead guard. Suggs also battled for quite a few rebounds and pushed the ball in transition.

We're a long way from Baltimore. Aldama was one of the surprise picks of draft night when Memphis selected him No. 30 overall. Aldama was chosen partially because of his complete dominance at Loyola Maryland. Making the leap from mid-major college hoops to the NBA is no easy task. Aldama didn't get a whole ton of touches in the early going and really struggled against stronger opponents.

The Hornets' lottery pick had to match up against Davion Mitchell on the second night of a back-to-back. So it's understandable that Bouknight struggled against one of the toughest defenders in NBA Summer League. He couldn't get shots to fall, and often tried to take Mitchell in isolation instead of calling for screens and running off of actions. Bouknight finished with five turnovers; the Hornets ended with a ghastly 22.

The shooting guard did have some nice moments, particularly on tough finishes at the rim. But overall, it was a down night from a scoring perspective -- even Bouknight's lone three-point make was after an odd hesitation.

Viewers saw Orlando's first attempts at a three-guard lineup with Anthony, Jalen Suggs and R.J. Hampton. Anthony appeared to really struggle with the inconsistent responsibilites. He spent a good portion of the game running the offense, but danced around and didn't seem to find a rhythm. Then, he looked uncomfortable in catch-and-shoot situations. These lineups will obviously have a learning curve for all of the young Magic guards.

The glimpses looked really good from Kuminga. He can thread passes to cutters. He can power through defenders to the rim. He can ignite a fast break by jumping a passing lane.

Unfortunately, those flashes were few and far between for the seventh overall pick. Kuminga typically steamrolled down the lane, tossing up a shot at the rim that either missed wildly or drew a forgiving whistle. He bricked each of his four three-point attempts and was never really a threat to make plays from the perimeter. Guards often breezed by him in defensive switches.

If Kuminga can be less predictable with his moves, he'll become a threatening offensive weapon. He has the tools; it's about learning how to use them.

Johnson's efficiency ultimately doomed him in his summer-league debut. The bouncy guard certainly displayed his athleticism on fast breaks, but ultimately missed a bunch of jumpers and took a couple of awkward shots. He was active and quick on defense, but did also get burned multiple times on backdoor cuts. Overall, this was by no means a concerning result from Johnson -- just a reminder that his offensive polish is generally a work in progress.

By the end of Tuesday, we'll have second samples to evaluate for nearly every player in summer league. I'll be excited to see who finds their groove and who learns from their debut game.