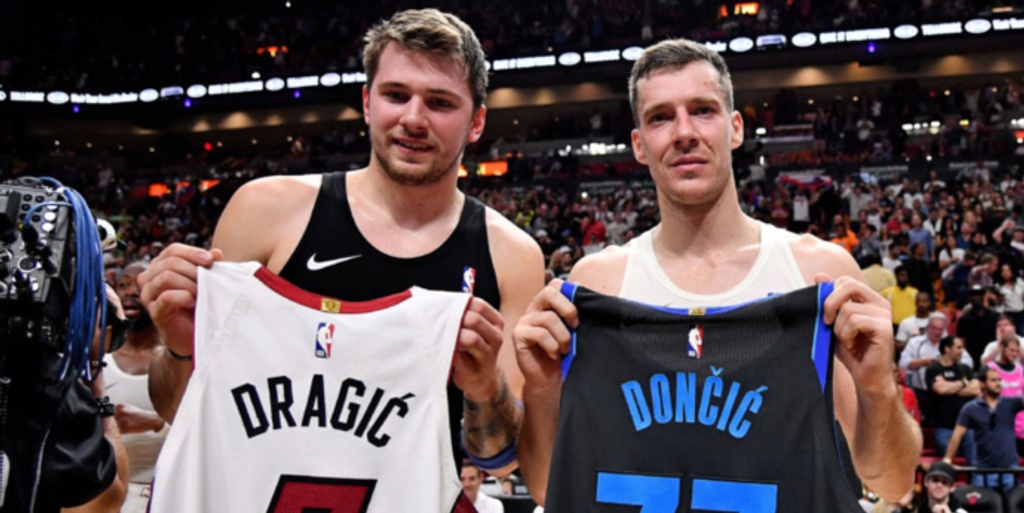 Speaking from Slovenia on Tuesday, Luka Doncic said nothing to dispel speculation that he might eventually be joined on the Dallas Mavericks by countryman Goran Dragic.

The possibility went viral on social media Monday after Dragic — who was traded by the Miami Heat to the Toronto Raptors in a sign-and-trade deal for Kyle Lowry — said that Toronto was not his “preferred destination” because he has “higher ambitions.”

When asked, Doncic played it cool.

“I don’t think we can say. We don’t want to get fined by the NBA,” he said as the Mavericks held a major news conference in Slovenia to announce his signing of a historic $207 million supermax extension.

Doncic and Dragic are from the small Balkan nation of 2.08 million people that just finished fourth in men’s basketball at the Tokyo Olympics. Dragic was dealt to Toronto in the aforementioned trade, and there has been speculation that he will eventually be re-routed to the Mavericks to play alongside Doncic, his countryman and friend.

And although Dragic tried to clarify his comments to infer that he would have preferred to stay in Miami because his two children have been living there, it did little to quiet the debate over whether he will be with the Raptors long-term. With Dragic about to enter the final season of his contract, it becomes a question of whether Toronto sees him as part of the franchise’s long-term plans. If not, it could make more sense to deal him to the highest bidder, which Dallas could theoretically become.

“Listen, it was translated and I think I would like to get it directly from him just to understand exactly what he meant by that,” Raptors general manager Bobby Webster said on the subject during a radio interview on Toronto-based Sportsnet 590 The Fan.

“But I think that if we're just gonna kind of talk about all of the issues, obviously, we feel like we're gonna be competitive, we have a core — as we've talked about — that's been around for a while and has won at the highest level as well.

“We'll just give it some time here to see how he would fit in and if he likes it here or not. I think he's a pro and he's been around a lot and he's obviously entitled to wanting to make the most of his years as his career comes down here… So I don't think it's in any way a slight or anything like that,” Webster said.

The Mavericks have had a busy offseason, replacing Rick Carlisle as head coach with Jason Kidd and hiring Nico Harrison as the team's new general manager. Dallas also signed free agents Reggie Bullock and Sterling Brown, re-signed Tim Hardaway Jr. and acquired center Moses Brown from Boston for Josh Richardson. With owner Mark Cuban having expressed a desire for a secondary ball-handler behind Doncic, the natural question is whether finding a way to acquire Dragic from Toronto is feasible.

Dragic will make $19.4 million in the 2021-22 season, and in order for Dallas to make a deal and have the salaries match, they would presumably have to include Brown, who cannot be re-traded until Aug. 19. Dallas would also, in theory, have to send other assets in order to satisfy the Raptors. The Mavericks have already traded their 2023 first-round pick (to the New York Knicks in the Kristaps Porzingis acquisition), so the earliest they could deal a future first is 2025. For salary matching purposes, Dwight Powell and his $11.08 million contract would almost certainly have to be included.

Even if Dragic begins the season in Toronto, speculation about whether he might be dealt to the Mavs or sign there as a free agent in July 2022 is certain to continue. It was in that atmosphere that Mavs owner Mark Cuban along with Harrison, Kidd, agent Billy Duffy and special advisor Dirk Nowitzki appeared from Slovenia to discuss the signing.

Doncic said he put pen to paper at his hotel early Tuesday and had not yet decided how he plans to spend the money he will make under a contract that will kick in for the 2022-23 season. The 6-foot-7 22-year-old is entering his fourth season. By virtue of being twice named First Team All-NBA, Doncic became the first player eligible to be signed by his drafting team to a “designated rookie max extension,” which yielded the landmark $207 million deal — the largest rookie contract extension in NBA history.

“I have to process this first before I start spending,” he said.