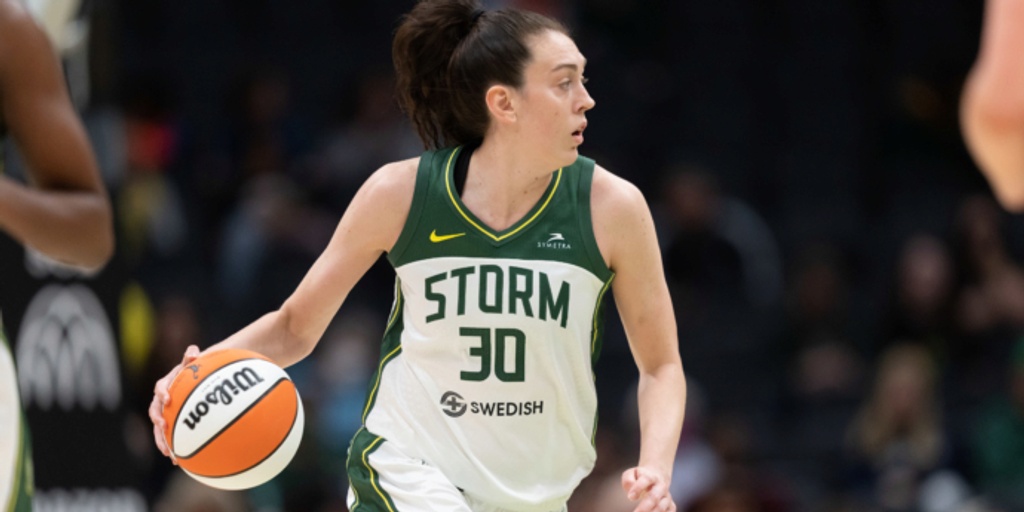 WNBA playoff basketball is finally here! With things kicking off on Wednesday night, I decided to highlight an X-factor I'll be keeping tabs on for each best-of-three first round series.

For Part II of this two-part series, let's look at the Thursday night matchups, which features the Connecticut Sun taking on the Dallas Wings and the Seattle Storm battling with the Washington Mystics. If you missed Part I, featuring the Las Vegas Aces-Phoenix Mercury and Chicago Sky-New York Liberty matchups, you can read that here.

(For deeper thoughts on each series, listen to our playoff preview on the latest episode of The Dunker Spot.)

It is both a treat and a disgrace that two legitimate title contenders are facing off in the first round. It's cruel that we may get, at most, three games of Delle Donne after the Mystics were so diligent about load-managing her so she'll be in peak condition for the postseason. And the thought of Sue Bird's career ending — or Breanna Stewart's career in Seattle ending, if you believe the New York smoke — with a first-round ouster just seems unfair.

Beyond that — holy bleep, are these teams ridiculously good defensively.

The Mystics and Storm ranked No. 1 and No. 3 in Defensive Rating respectively. That Moreyball stat from the Aces-Mercury section — the percentage of shots that come at the rim or behind the arc — can be flipped to see which teams are preventing their opponents from taking shots from fruitful areas. The Mystics (54.4% of shots) and Storm (59.0%) have allowed the lowest share of those shots in the league.

As dominant as they are defensively, they've been equally middling on the glamour end of the floor. They're separated by roughly a point in terms of Offensive Rating, with the Storm (102.6, sixth) edging out the Mystics (101.1, seventh) this season. Quiet as kept, neither team gets to the rim that often.

They've both struggled with flow in the half-court, though some of their struggles can be explained away. The Mystics haven't always had Delle Donne in the lineup; with her being the only player that consistently draws an extra defender, it's led to a lot of side-to-side passing and unsavory shot selection. As good as Natasha Cloud and Ariel Atkins are, teams are pretty comfortable ducking under picks against them to:

With the Storm, things would fall off a cliff whenever Stewart would leave the court. Ideally, this would set the stage for Jewell Loyd to lead second units. Her blend of driving and pull-ups should help weather storms (sorry), but she simply hasn't made shots at the same clip. She converted a career-worst 40.3% of her two-point shots, including a ghastly 33.7% on shots between 3 and 10 feet.

With that, I wonder how each team goes about unlocking itself in the half-court beyond, "Give it to Stewie/EDD and get out of the way."

For the Storm, that may be experimenting with more on-ball reps for Gabby Williams, who's both the worst spacer in their starting unit and a sneaky-good pick-and-roll player. They trust her with reps in early offense situations, either above the break or emptying a side and letting her zig and zag.

Utilizing Williams on the ball could limit the help the Mystics can send. If Williams is the one setting the table, the star talent she's surrounded with could feast on catch-and-shoot or catch-and-drive opportunities against a tilted defense.

On the Mystics side, I'm intrigued by the inverted pick-and-rolls and ghost screens they've mixed in with their guards. That could be a way to get the Storm to put two on the ball, which could open up short-roll opportunities and easy drive-and-kick scenarios.

KEY QUESTION: How impactful can Teaira McCowan be?

This has felt like a popular upset pick, and I get the argument for it. The Wings did win the regular season series, though the wins came with Ogunbowale averaging 18 points and drilling crucial shots and versatile forward Satou Sabally doing a little bit of everything. Neither will be available once the series starts.

There's also the matter of the Sun, as talented as they are, also having a tendency to lose the plot in the half-court. Even amidst their overall success — I hear having the second best ORTG in basketball is a good thing — the lack of Jonquel Jones in crucial moments continues to baffle me.

Ultimately, I think the Wings' chances for an upset will depend on how well McCowan can hold up.

She's been a revelation of late, holding down the fort inside with deep seals, post hooks, offensive boards and plenty of fouls drawn. She's also seen her fair share of double teams, and that's where things could get dicey.

Jones is a good defender in her own right. She won't need help in form of a double or hard dig. But she may get them, mostly because Alyssa Thomas is one of the best defenders on the planet. She's an event creator of the highest order, and an instinctual defender willing and able to take aggressive gambles. I think back to this recent possession from a Wings-Mercury game:

If Sophie Cunningham can fluster McCowan with help like that, what kind of damage could Thomas do?

McCowan has been able to plow through opposing defenses — figuratively and literally — as the Wings have closed their season on a high note. Being game planned against in a playoff setting is different altogether. It's where the foul trouble and the less-than-sterling assist-to-turnover ratio — she had 8 assists and 14 turnovers in her last five games — come into play.

I'm a little less worried defensively, but it's worth keeping an eye on her in a drop. Courtney Williams is not gun-shy; she took by far the most mid-range jumpers in The W, and I'd worry about the cascading effect of McCowan's drop turning into a late switch.

Not that Kayla Thornton and Allisha Gray aren't good rebounders in their own right, but tasking them with battling with Connecticut's size on the glass is unfair to them. McCowan in space is also asking for an advantage to be given up, or fouls to be committed. And without Ogunbowale, she's frankly too important to log under 30 minutes a game if she can help it.