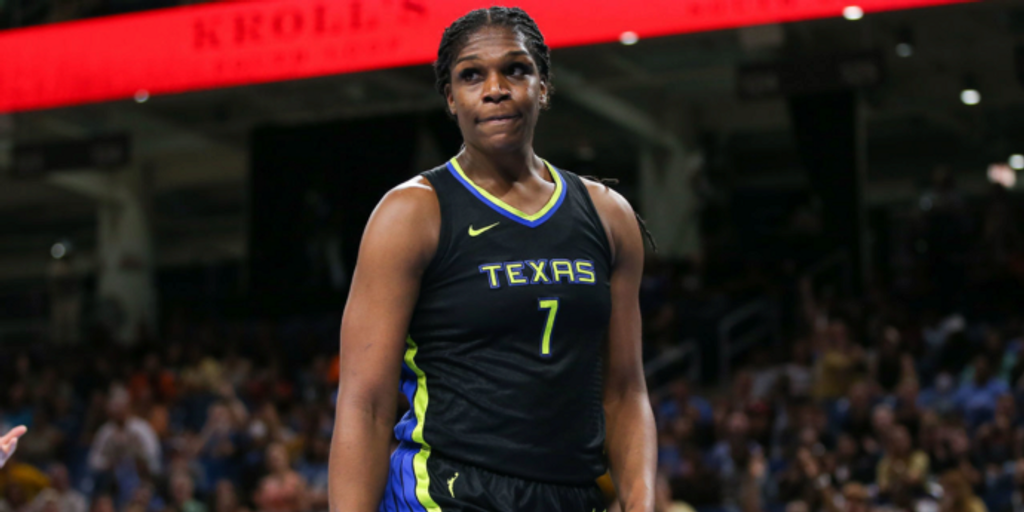 Teaira McCowan is shining for the surging Dallas Wings

Quick question: Who has the longest winning streak in the WNBA right now?

If you guessed the Chicago Sky, owners of The W's best record, you'd be incorrect. They're in a great position to lock up the top seed this week, and have won 8 of their last 10 games, but they've only won their last two. The Las Vegas Aces, two games back of the Sky, aren't the answer either.

In fact, both of these teams have lost to the actual answer in the past week: The Dallas Wings.

The talented, confusing, constantly-shuffling Wings are on a five-game heater. With wins over the Atlanta Dream, Sky, Aces, Indiana Fever and New York Liberty, the Wings find themselves locked into a playoff spot (likely the No. 6 seed) and over .500 (17-16) for the first time since June 5.

They have The W's best Net Rating since July 30 (plus-8.5) behind an elite offense (110.0 Offensive Rating, second) and a strong-enough defense (101.5 Defensive Rating, fifth). The offensive boom is a bit surprising considering star guard Arike Ogunbowale has only appeared in 2 of the 5 contests.

This has been a collective effort. Marina Mabrey is averaging nearly 20 points per game during the win streak, and is fresh off a career-high 31-point outing against Sabrina Ionescu and the Liberty. With no Ogunbowale, the Wings have bumped up the minutes of Ty Harris and rookie Veronica Burton. While neither has the scoring chops of Ogunbowale, they're both able to fill gaps offensively while being (much) better as point-of-attack defenders.

Allisha Gray and Kayla Thornton have been absolute menaces defensively, with the latter having her most prolific offensive stretch of the season (14.2 points, 44.3% from 3).

I'd argue the star of the run has been Teaira McCowan.

The numbers themselves are impressive. She's averaging 17.6 points (55.9% field goal percentage) and 13.0 rebounds in roughly 30 minutes a night during the win streak. Zoom out a bit, and she's averaging 16.2 points (60.0%) and 10.0 rebounds per contest in 10 games since being named the full-time starter on July 14.

There simply aren't many players equipped to deal with McCowan's blend of size (listed as 6-foot-7, 239 pounds) and touch around the rim. It's one thing to have the stature of McCowan; it's another thing to know how to use it to bust defenses.

McCowan's ability to seal and drive players backward can bring a defense to its breaking point. It allows her to get deep positioning for easy buckets or drawn fouls, of course. But because she threatens the rim to that degree, she also forces double- and triple-teams down low. For a team missing its no-doubt-about-it coverage breaker in Ogunbowale, McCowan has given the Wings a much-needed pressure point in the half-court.

To that point, the Wings have posted an ORTG of 113.9 with McCowan on the floor during the win streak; that number falls to 104.7 when she's on the bench. A whopping 66% of the Wings' shot attempts have come at the rim or from three during this stretch; that number drops to 56% with McCowan off the floor.

It's been more encouraging that the Wings have been able to survive with McCowan on the defensive end of the floor.

There are limited pathways for the Wings to field a great defense around McCowan. She's most comfortable in a deep drop, a coverage that yields pull-up attempts and puts much of the onus on perimeter defenders to prevent worse outcomes. McCowan struggles to flip her hips in space, leaving her susceptible to re-screening or sudden jukes from ball-handlers.

The Wings have seemingly asked her to meet them in the middle. She's playing higher up against ball-screens. But instead of a traditional hedge-and-recover assignment, McCowan essentially gets to the level of the screen, then attaches to her defender to take away the roll. It's normally accompanied by the perimeter defender ducking under said screen to meet the ball-handler, or, with another Wing player stunting at the pick-and-roll to provide an extra layer of help.

It's a weird-looking middle ground with holes to exploit. Re-screens to force McCowan to make second or third efforts can get dicey. Something as simple as rejecting a screen has the potential to put the defense in a bind.

For now, the Wings have defended at a middling rate with McCowan on the floor. However, as long as it's "middling" and not "holy crap this is awful," McCowan's minutes will be closer to 30 minutes than the 20 or so she was getting before this win streak.

And if McCowan can stay on the floor long enough, she'll bring plenty of pain to opposing defenses.