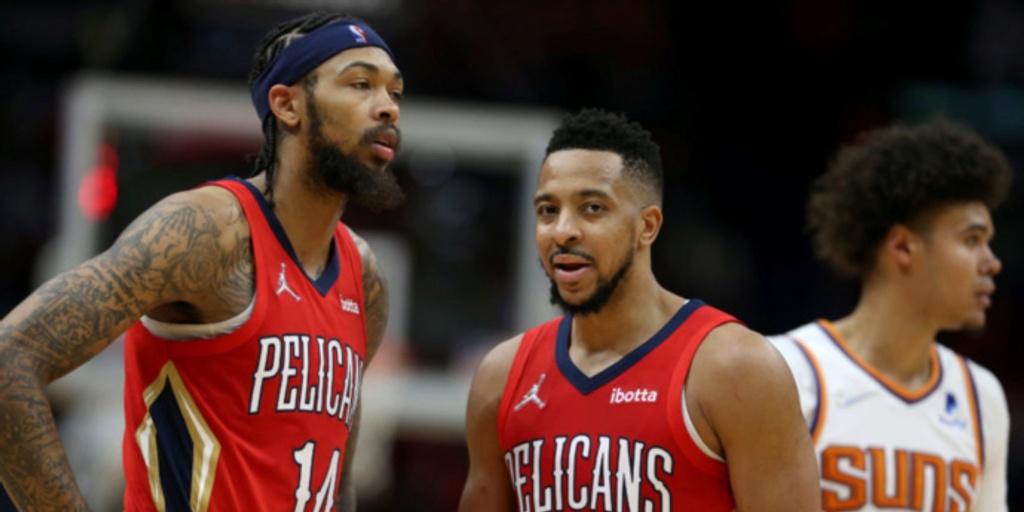 2022 NBA offseason preview: What's next for the New Orleans Pelicans?

We have reached the point where Stephen A. Smith is conjuring up the narrative that Zion Williamson is holding back the New Orleans Pelicans from contending for a title.

When did we get to this part of the Twilight Zone, I need to get out 😭😭😭 @PelicansNBA pic.twitter.com/sOnggL7FYf

Let's not discuss that clip any further besides pointing out how dramatically the Pelicans changed course and captured the respect of the national basketball audience this season. Stephen A.'s rant is less relevant for its substance and more noteworthy because ESPN is still talking about the Pelicans even after they were eliminated from a hard-fought, first-round series. New Orleans started 1-12 (!!) and turned into one of the NBA's true darlings in a matter of months — all without its most marketable star.

Brandon Ingram asserted his star status, averaging 22.7 points, 5.8 rebounds and 5.6 assists per game (27.0/6.2/6.2 during the postseason) while taking a leap as a playmaker. CJ McCollum fit right in as a "1B" creator and microwave shooter after the trade deadline. Herb Jones is the certified steal of the 2021 NBA Draft, and undrafted rookie Jose Alvarado isn't too far behind.

There is no hyperbole fit to describe the sheer joy I had watching the Pelicans through the wins and losses of this season, and if you followed along, you recognize the progress that far exceeded the record and results.

Perhaps the best part is that New Orleans remains built for the future.

Only three players hit free agency this offseason: Tony Snell, Jared Harper and Gary Clark. Everyone else is under contract for 2022-23 — no team options, no restricted free agents and no partial guarantees, per Spotrac. On the signing front, Zion is the biggest domino, as he'll be eligible to sign a rookie extension before hitting restricted free agency in summer 2023. At least publicly, he is giving positive indications:

I asked Zion Williamson if offered an extension this summer by the Pelicans would he sign it?
His answer.
“Of course, I couldn’t sign it fast enough.”

However, Williamson has now missed a whopping 141 games in his NBA career. Even if he inks a max extension, which Dan Feldman of NBC Sports says could be worth well over $180 million, Pelicans executive vice president David Griffin implied that talks might be complicated.

“Obviously, that conversation is going to be one that will be a challenge,” Griffin said. “When it’s time to have that, we’ll have it. And right now what we’re focused on is him being healthy, and (being in) kind of elite condition to play basketball and we’ll start there.”

Ultimately, Williamson's health and wealth are the rudder of the Pelicans' ceiling. But Griffin still has much to address on other fronts.

New Orleans has the Lakers' first round pick with zero protections — an exciting opportunity given that pick has the eighth-best lottery odds. At the very least, the Pelicans get a free chance to add another young talent to the rotation, and if things break right, they could add another franchise cornerstone.

Senior NBA Draft Analyst Matt Babcock projects New Orleans to pick Duke freshman AJ Griffin in our latest mock draft if they remain at No. 8. Griffin is a high-upside choice as one of the youngest players in the draft class. A long, 6-foot-6 wing, he's returned from injuries in high school and at Duke, and flashes traits of a dynamic three-level scorer and creator.

The Pelicans send their first-rounder to Charlotte as part of last summer's Devonte' Graham trade. But they still hold their own second-round pick (No. 41 overall) and a pick from Utah (No. 52). Babcock has Kentucky center Oscar Tshiebwe and Villanova guard Collin Gillespie mocked to New Orleans in the second round.

Even with a packed roster and their draft picks, the Pelicans still have assets to get frisky in free agency. They'll have $10.2 million non-taxpayer mid-level exception to use on a free agent along with a $4 million bi-annual exception. More notable is their $17 million trade exception generated from trading Steven Adams to the Memphis Grizzlies. New Orleans could absorb a player into that exception with some financial flexibility.

But how much should the Pelicans shake things up? Since Jan. 1, they sported the 17th-best offense and defense, according to Cleaning the Glass, and were still only the ninth seed in a deep Western Conference at season's end. Yet we saw other young prospects — most notably Jaxson Hayes and Trey Murphy III — visibly develop as the year moved along. The five-man unit of McCollum, Ingram, Jones, Hayes and Jonas Valanciunas played 294 possessions after the trade deadline and was a solid plus-7.1 points per 100 possessions.

New Orleans receives one of the NBA's biggest boosts if Zion Williamson comes back healthy to open 2022-23. Willie Green gets a summer to prepare after a stellar first season as a head coach. The Pelicans have a bright future ahead, and this offseason should purely be icing on the cake.