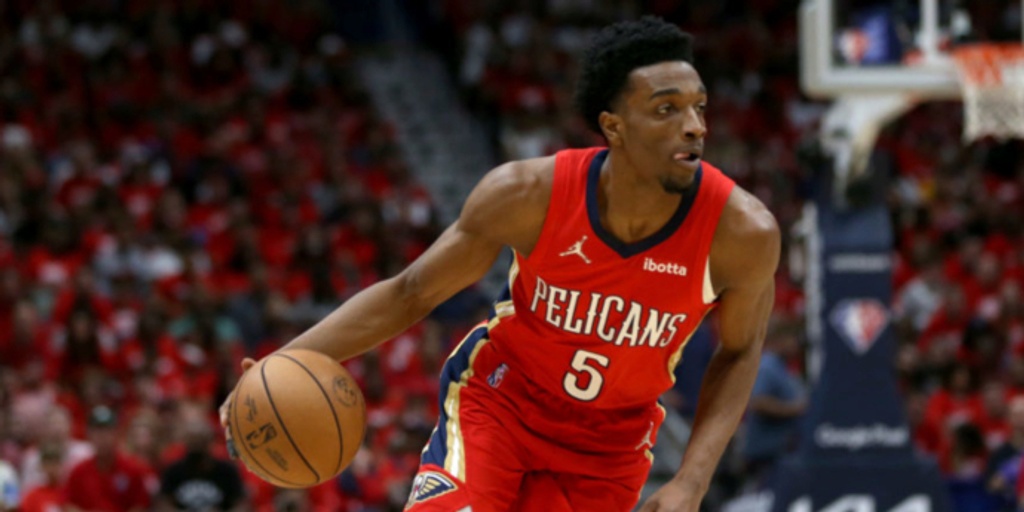 Despite their recent playoffs ousting at the hands of Chris Paul, the future for the New Orleans Pelicans feels much brighter than most projected at the turn of the year. Three rookies combined to play 32% of Willie Green's rotational minutes, including lineups that contained all three. It's not often that a singular rookie plays positive minutes in a competitive playoff series, and it's near unheard of to have a trio doing the same.

Trey Murphy III, the 17th overall pick in last year's draft, and Jose Alvarado, the undrafted free agent signing who steadily garnered a cult following this year, had huge moments in this series.

Herbert Jones stood above the rest.

Still thinking about this from Herb pic.twitter.com/4SVi3fLkM0

If you follow me and my work, your timeline has been absolutely littered with clips and musings about the southpaw forward dating back to Summer League.

His defensive play has stood out since he was at Alabama, where he was the 2020-21 SEC Defensive Player of the Year and 2x SEC All-Defense, and that's what allowed him to make his mark for the Pelicans this season. How good was his defense? We had him on our Second Team All-Defense during our defensive awards roundtable with myself, Jackson Frank, and Nekias Duncan.

Jones is not just awesome for a rookie; he's awesome period and has legitimately staked his claim as one of the best defenders in basketball.

His help instincts are fantastic. He makes rotations and defensive slides with a consistent intensity that few can match. Jones is a stonewall at the point of attack and already might be the best screen navigator in the league. He's adept at utilizing his hands and feet simultaneously to keep the ball in front. What makes him special to me as a defender is his body control. Considering how much time he spends defending primary options, it's remarkable that he didn't have a higher foul rate: 4.1% was in the 25th percentile this year per Cleaning the Glass, but that doesn't take into account defensive responsibility.

Jones finished 6th in BBall Index's matchup difficulty ranking, which gauges the players guarded and adjusts their defensive metrics accordingly. Jones had the fourth-lowest foul rate out of the top six defenders in matchup difficulty. He ended behind Dorian Finney-Smith, De'Andre Hunter, and Luguentz Dort but just ahead of Dillon Brooks and Matisse Thybulle.

Defense is the foundation of Jones' game, but we've seen numerous defense-first prospects come into the league and struggle to establish a larger role on their respective roster. Jones became a full-time starter at the end of November, averaging 31.3 minutes per game from November 24th to the end of the regular season. He closed games for the Pelicans. He took on more ball-handling duties both in bringing the ball up the court and some secondary offensive actions.

How did we get here? How did Herb Jones go from, "He could be a useful rotation player," to viable NBA starter?

Oddly enough, Jones has shown a greater level of touch in the NBA than he ever did in four years at Alabama, which is a wild thing to ponder.

Let's pull back the covers here.

For reference, if Herb had shot 35.6% in the league, that would've made him the fourth least efficient finisher of drives in the league (1.5 FGA on drives per game, at least 40 games played). While 46% is still a bit below average, it can't be undersold what an upgrade that is.

As a driver at Alabama, Jones really struggled with decceleration. He was fantastic at getting to the rim, but he was equally adept at smothering himself once he got there. There was fairly minimal pacing to his delivery. There were a ton of awkward footing jumps. So many of his attempts at the rim just felt off before they even left his hand. The handle is quite solid for his size, but the exchange from the floor to the rim felt clunky.

In the NBA, Jones gets to attack off the catch more and benefit from stepping into downhill attacks, yet he's better even with the ball in his hands.

He's thrown in more hesitation and stutters. He's using the rim more to protect some of his drives and attempts rather than trying to force up a tough touch shot after barreling into the paint. The footwork is a good deal more crisp than last season, and he seems better at getting skinny through tight spaces in traffic.

He still has some really rough misses. Late help or an eager low man can clean up his shots. He doesn't have a ton of counters right now. He was 3-for-21 on floaters this year on drives according to InStat, which is about where he was at Alabama. He still has some "Woah, what was that?" type misses, but it's hard to deny both in watching and via data that he has better touch. It's been one of the weirdest things to follow this year, and finally pulling the numbers was startling.

Let's peel back another layer.

I'm not comfortable in saying what level of shooter he could be in time, but to go from where he was two years ago to now is an insane growth curve.

He was ignored as a shooter at Alabama last year, and while he eventually was in the playoffs most of the time this year, the growth in confidence was immense. His shot was a bit up and down, but Pels shooting coach Fred Vinson, along with Jones' work ethic, has seemingly been a Dragon Ball-Z esque fusion dance combination.

At Alabama, he brings the ball across his face from right to left on the release, and while he's squared up, his feet are pretty close together with a notable valgus collapse (reverse "V" shape with knees).

In the NBA, the ball isn't coming all the way across his body anymore. There's still the valgus collapse, but it's not as pronounced, giving him a much cleaner shot overall that's easier to replicate.

He has a very good feel for the game and excellent court vision, which he put on display throughout much of his amateur career, but his improved efficacy as a driver allows him to showcase more live dribble playmaking rather than strictly connecting plays. Drawing closeouts as a shooter and having the ability to run actions or spark plays as a secondary initiator allows him to flex those playmaking chops.

The gains he's made this season have arguably made him the most viable he's ever been as an offensive creator. He already has the basis to be a starter on a playoff team, because he was one this year. While every player has some sort of ceiling due to physical limitations or other limitations in their game, it's hard to put a cap on what his ceiling might be.

If you'd asked me last year whether or not I thought Herb Jones could be a starter in the NBA, I probably would've said it was unlikely barring some sizable growth. Well, that sizable growth has happened.

The level of defender that Jones is, along with an already solid baseline of offensive plays, will allow him something that many prospects struggle to get: playing time. Because he can already do impactful things on the court, he'll continue to get incredibly valuable in-game reps. The G-League is great, but getting to craft your game at the highest level is an entirely different developmental scenario.

Could Jones be an All-Star someday? I can't rule it out. He's already blown me away with his growth. I wouldn't bet on it happening, but I certainly wouldn't bet against it either.

Can he take more steps as a ball-handler or find some extra bend as a driver? I wouldn't call him a stiff driver, but he doesn't generate crazy power with his first step. If there's some added flexibility in his legs, maybe he gets an extra oomph of burst.

Can he find more with his touch outside of just his jump-shot from three? Herb took 53 jumpers inside the arc and hit 35.8% of them according to InStat. Is there some pull-up viability in time? Can he factor in more pacing and craft out of ball-screens? Can all these things compound into him becoming capable of carrying a larger creation burden?

Again, I'm not sure, but the point remains that higher pathways are within reach as he continues to develop. Herb Jones is already a star in his role, and there might be more there than meets the eye or that can be ascertained on paper when taking his full developmental journey into context.