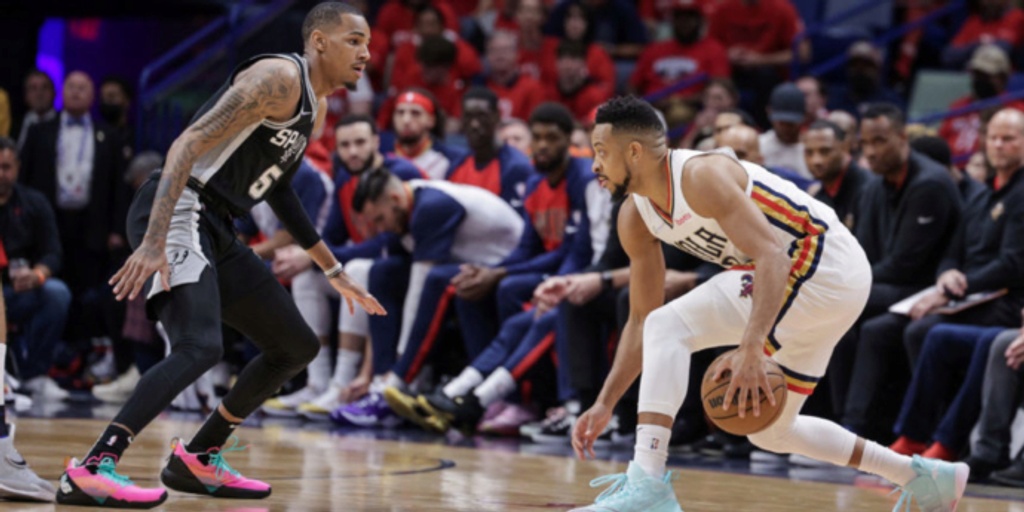 Wednesday was a celebration of how far the Pelicans have come

Throughout Wednesday’s contest between the San Antonio Spurs and New Orleans Pelicans, the Smoothie King Center’s atmosphere swelled to unconscionable decibels. Pelicans fans, overwhelmingly clad in red T-shirts, roared in support of their team, one that controlled much of the contest and dispatched the Spurs, 113-103.

They had many reasons to cheer, all of which draw back to the Pelicans’ remarkable turnaround without superstar Zion Williamson the entire way. After opening the year 14th in the West with a record of 3-16, New Orleans is now 37-46 and stands just 48 minutes away from a first-round series with the Phoenix Suns.

Since this 34-30 run commenced, the Pelicans have been a true joy to watch. The beauty of this club is that its frenzied, impassioned fans could’ve been delighted for any number of reasons Wednesday. There is not one singular storyline to embrace. The splendor rings up and down the roster. It’s like a "Choose Your Own Adventure" book, and every endpoint is a feel-good tale.

Wednesday’s stars were abundant and a matter of a perspective, the resolute theme of this five-month resurgence.

CJ McCollum slithered, shot and boogied to 27 first-half points and finished with 32 on the day. Before being traded from Portland, McCollum would sometimes dissolve in the shadows of Damian Lillard, always a year behind the experience of his backcourt mate and outmatched for individual honors. In New Orleans, McCollum is the elder statesman. Only Garrett Temple is older, and nobody touts more playoff game appearances.

This is his opportunity to be the veteran star, and he’s seized it, averaging 24 points, 6 assists, 4  rebounds and a steal on 58.0% True Shooting in 26 regular-season games as a Pelican.

His 32-7-6-1 (63.5% TS) performance against San Antonio, punctuated by deft dribbling sequences into drives and silky pull-up jumpers, along with a 7-of-7, 19-point second frame, summarized everything he’s brought the last two months. By night’s end, he made it clear, he’s “at home,” and he illuminated that comfort during the biggest game of the season.

McCollum’s shot-making partner, Brandon Ingram, glimmered Wednesday to the tune of 27-5-5 on ~62% TS. Over the past few months, Ingram has evolved his game, growing as a decision-maker, facilitator and off-ball defender. He’s established himself as a bona fide star and one whose impact stretches well beyond scoring, while continuing to pour in buckets at a reliable rate.

After the Spurs jumped out to an 8-2 lead in the first quarter, Ingram played the role of stabilizer, tallying 11 points and two dimes over a seven-minute span and fueling an 18-8 run. To open the second half, he displayed his defensive maturation and helped stymie numerous possessions as a helper.

When San Antonio trimmed the deficit to six with just under five minutes remaining, Ingram snapped a five-minute drought by scoring 6 of New Orleans’ next 8 points and pushing the lead back to double-digits. For stretches, the Spurs doubled him off of screens, and he seamlessly played the role of a waiter by finding teammates for quality shots.

Ingram's full complement of skills was evident, some of which he rapidly incorporated and were integral to the Pelicans’ renaissance. He thrived amid his first swim in the waters of postseason basketball.

If McCollum and Ingram were the offensive standouts, Herbert Jones is the unabashed, brilliant defensive standout of the night. Wiggling around screens and applying his 7-foot wingspan to disrupt shots, he hounded All-Star Dejounte Murray en route to a 5-of-19 shooting game.

When opportunities arose offensively, he snagged them, knocking down a pair of triples and disappearing behind the defense as a cutter. Once a second-round rookie who played just three minutes in his NBA debut, Jones has, six months later, proven to be a legitimate All-Defensive Team candidate. He finished this game with 12 points, 5 boards, 3 dimes, 2 steals and 2 blocks. An All-Rookie nod awaits him and might come while he’s starring defensively in a first-round series, justifiably playing heavy minutes for a team on the rise.

The tone-setters alongside Jones’ All-Defense exploits were stalwart big Jonas Valanciunas and undrafted rookie Jose Alvarado, who definitively declared that yes, he can shoot, in the grandest game of his life.

With Jones discarding screens like second nature, Valanciunas’ astute positioning and strength as a drop defender further frustrated Murray in pick-and-rolls. He wielded active hands to disrupt the point guard’s rhythm and when the contexts ventured outside of pick-and-rolls, Valanciunas influenced shots around the rim.

As the tension inside eased for him offensively, Valanciunas scored 12 of his 22 points in the third quarter and exited the period with New Orleans leading by 21. He was the Pelicans’ bedrock this season, playing 2,240 minutes (second-most on the team) and routinely buoying them on both sides of the ball.

When Ingram was sidelined, Valanciunas’ efficiency as a face-up and post hub carried the offense. If defenses loaded up against him, he sprayed passes to cutters and shooters. He molded his game to fill the shape of whatever holes existed on the roster, something he’s done for years. Only a handful of NBA centers are better than Valanciunas. New Orleans does not reach this point without his steady, multifaceted contributions.

The Pelicans didn’t just close Wednesday with one rookie in the lineup. They closed with two, as Alvarado usurped Jaxson Hayes for the final spot. He scored 12 points, splashed in three triples, blended in well off the ball offensively and snagged a steal, which led to perhaps the most dynamite portion of the first half.

Electric sequence from the Pelicans. This team is a joy pic.twitter.com/bqOCB4YJ1l

Formerly a two-way player who didn’t crack the rotation until January, Alvarado signed a four-year contract last month (with team options for the last three seasons, unfortunately). His point-of-attack chops defensively and downhill zeal offensively have ignited the Pelicans’ rotation.

He’s emerged as their most important reserve guard. Advanced metrics adore him, and rightfully so. Head coach Willie Green’s decision to roll with him down the stretch was a culmination of his play the past three months. Jose Alvarado won’t just stick in the closing lineup Wednesday. He’ll stick around the NBA for a while.

Collectively, Wednesday’s game should be a celebration of the Pelicans' players and coaching staff. A 3-16 start with a remade roster and new coaching staff could bury a team. But everyone involved practiced fortitude. Whatever message Green preached to his players and staff resonated.

They climbed out of the 14th spot, in part because a first-year coach had the moxie and belief to tab two rookies as vital parts of the rotation. Not every coach would embrace that decision, especially one whose imprint is yet to solidify.

Regardless of how Friday’s duel with the Los Angeles Clippers concludes, the Pelicans’ season is a success. Wednesday encapsulated the wide-ranging factors for that success. Everywhere you look, a different fan probably had a different reason to jubilantly clap their hands and voice their approval. It’s why this New Orleans team is an absolute charm.

Basketball should be fun in a multitude of ways. That’s exactly what these Pelicans are.