2022 NBA offseason preview: What's next for the Miami Heat?

To even get in this position, the NBA’s most unyielding organizational machine almost somehow, some-f***ing-how, did it again.

Down 98-85 with 3:30 left in the fourth quarter of Game 7 of the Eastern Conference Finals, where his team hadn’t led once, this sh** should’ve been over.

But, then again, it was about 48 hours removed from Jimmy Butler’s remix of LeBron James’ famous Game 6 in Boston performance as the Heat trailed 3-2 a decade ago in the 2012 East Finals.

Again, LeBron? After you couldn’t get it done with the Cleveland Cavaliers, after you didn’t want to post-up JJ Barea in the 2011 Finals, you’re crumbling again?

That's what people may have thought prior to James exploding for 45 points, 15 rebounds and 5 assists on 19-of-26 shooting on the road with Miami's backs against the wall.

With the Celtics as 10-plus-point favorites in sportsbooks and the media ready to coronate Boston (as some of them would shamelessly do every year if they could), Butler outdid James, willing his way to 47 points, 9 rebounds and 8 assists, shooting 55.2% from the field, going 4-of-8 from three and making all of his 11 free throw attempts.

Most thought even getting to this point would be impossible. And yet, here they were — this organization — defying the public again.

Trailing by 13 points with 3:30 left to go in Game 7, this sh** should’ve been over. But Kyle Lowry makes a prayer of a mid-range jumper with 3:22 left and Max Strus dunks a putback after a Victor Oladipo miss with 2:40 to go. Then, off a Lowry steal on Grant Williams below the opposing basket, Oladipo finishes in transition and cuts the deficit to 98-91 as 1:23 remained on the game clock.

There’s no way. There’s just no f***ing way. But a mere 20 seconds later, Lowry lays it up against Williams. It’s an 8-0 run. With about 50 seconds left, Jaylen Brown elbows Bam Adebayo in the mouth on a drive; it's an offensive foul. Five seconds later, Strus buries a three — fading away, heavily contested — and now, it’s 98-96.

And then, it comes down to Butler’s decision. To this point, he has 35 points and 9 rebounds on almost 60% shooting. He’s averaged about 26-7-3 despite playing like sh**, by his standards, from Games 3-5 while battling the knee injury he was still enduring. With 18.3 seconds left, after pushing up the floor, he faces Al Horford and, with enough space, goes for the kill shot to put the Heat up one finally. He brought you here. He can do what he wants.

Butler missed. It fell short, and the Celtics mercifully hung on for the victory in the face of an all-time collapse, but the Heat were one shot from a second NBA Finals appearance in the Butler era, which is now entering its fourth season.

The Heat don’t just have a 16-Game Player, they have one of the best playoff performers in the league. If you disagree, how many times does he have to f****ng show you? Right knee inflammation be damned — he was arguably the best two-way playoff player standing up until Sunday night. But to drag, claw and will his team to that moment was something few saw capable prior to it, even as he showed us in the 2020 playoffs what was possible.

This Heat team overcame injuries and/or COVID and/or personal issues regarding every single player on the roster. Famously, it was noted all year how little the team’s four best players even shared the floor. After nearly spiraling out of control and f****ng each other up on the sidelines in late March, the Heat gave up the No. 1 seed, rallied as only they could and secured it again before playoff time.

But still, questions linger. Turning 33 years old in September, how much of this Butler can you count on? Soon to be 25 years old, is Adebayo ready to take his much-needed next step offensively with consistency? How much does Lowry have left in the tank at 36?

And even at just 22 years old, which he reminded us of yesterday, is Tyler Herro the one who gets squeezed? Because he’s extension eligible now after underperforming in the playoffs, having far and away the team’s worst postseason On/Off Court rating (-22.7) even before his groin injury in the conference finals.

As Ethan Skolnick usually says on 5 On The Floor, quoting Pat Riley, “The playoffs tell,” and what the playoffs told the Heat are a few things.

Regarding length: Adebayo is still your center, and although the Heat reached an NBA Finals with Jae Crowder as the 4 beside him and were one shot from PJ Tucker doing the same, they should be in the market for a big who can do two key things: Stretch the floor and protect the paint.

If the Heat are going to switch everything (and Adebayo will switch more than anyone in the league), you need a back line of defense when teams like the Celtics, Milwaukee Bucks and Philadelphia 76ers try to size up and attack the interior. Additionally, Tucker turned 37 during the playoffs and has a player option worth $7.35 million, which he could decline for one, last multiyear deal if he wishes. Either way, the Heat would prefer to retain him, but he shouldn’t carry the load he did all 2021-22 season next campaign. 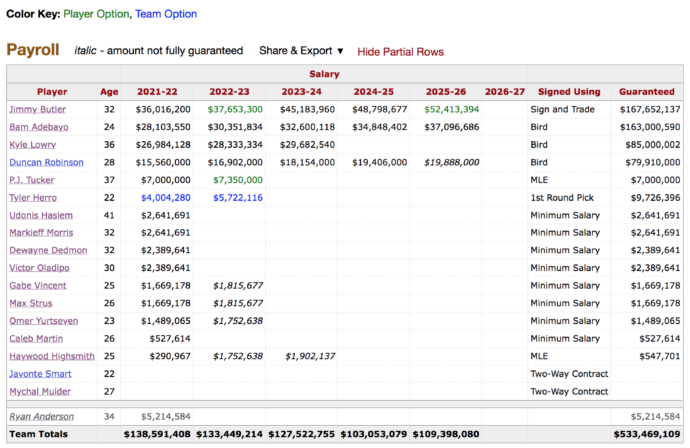 The Heat will not have cap space this summer, but Spotrac indicates that they will have a full, non-taxpayer mid-level exception worth $10.2 million next season because the team is, as of now, not in the luxury tax. The mid-level could be a four-year deal up to around $43 million, though most mid-level deals are shorter and may include an option. The Heat also have the bi-annual exception, in which they could use up to $4 million for the 2022-23 season. And in addition to that, Miami has a $1.8 million trade exception from the KZ Okpala deadline deal with Oklahoma City that essentially gave the Heat three first-rounders to play with this summer, or whenever, as opposed to the one the franchise possessed.

Speaking of that, we did say the Heat need shot creation.

Having already noted that Herro may have been playing for his future during the playoffs, one thing was made clear: Butler needs help offensively.

As frustrating as Adebayo’s lack of aggression can be for some, it’s important to note that without his defense, they don’t even beat the Sixers, let alone push the Celtics to seven games. We’re getting to the point where people are saying, “Oh, I understand his defense, whatever, but...” Like, no, fam. No. This is arguably, pound-for-pound, the best and most versatile defender on the planet. God forgive him for giving you world-class defense, including more switches than anyone else on earth, and not dropping 27 points a night. If he did, he’d probably be worn down and injury-prone by his late 20s. As a contender, Bam should be your third option offensively, as he was this year, nearing 20-10 per night in the regular season and occasionally exploding in the playoffs. (That, he should do more, no doubt.)

The true question: Is Herro good enough to round out that top three with Butler and Adebayo? Unlike Adebayo, Herro isn't providing much if he isn't scoring. Do you work around them to improve the committee? Or do changes need to be made at the top?

If it’s the former, the Heat will need to get creative and trust that Herro’s development will meet Butler’s timeline in a playoff setting — not just for 82 games — as Herro finishes the last of his rookie-scale deal. If it’s the latter, Tyler's the one that goes. You’d be moving the good player for the great player. Even if you think Herro tops out at Devin Booker-level in three years, that doesn’t make him a can’t miss developmental story if the Heat are trying to win now. They can’t afford not to have Herro get there as soon as possible; it isn’t fair, but it’s part of the business and the crossroad the Heat find themselves at.

(Besides, name all the players that were traded from the Heat and improved considerably? I’ll wait...)

The players you should most expect to see back, as of now, are Butler, Adebayo, Lowry, Strus and Gabe Vincent — the latter two will make $1.8 million each next season and made significant strides in 2021-22 as rotational pieces. Tucker should be more likely back than not, but there’s no certainty there. Spoelstra made it sound as if Oladipo will be back. However, Oladipo will be a free agent this summer, so that’s to be determined, as is the status of pending free agent Caleb Martin, who wants to stay.

Duncan Robinson and Dewayne Dedmon — both of whom lost rotation spots in the playoffs — most certainly will have new homes next year.

Robinson’s will have to be via trade, and although his value has tanked compared to where it stood 12 months ago, no NBA deal is unmovable. The question is whether or not he’ll be packaged with Herro as part of a blockbuster deal that further cements the Heat’s contendership, or if Robinson's mainly a standalone in a deal, perhaps packaged with someone like Omer Yurtseven (who’ll get over $1.7 million next season and showed flashes throughout the season of a rotational piece).

We’ll get deeper into the weeds as the draft and free agency actually approaches. What I’ll end on is this: If it’s Robinson alone and/or Robinson and Yurtseven, people have thrown names out there like Christian Wood and Marcus Morris. For me, if I built someone in a lab who I’d want to play next to Bam on the interior, he’d be able to shoot threes and protect the paint, as outlined earlier. He’d be around 7-foot tall since Adebayo is about 6-foot-10, maybe, with a distinct wingspan. He’d... basically be Mo Bamba, so if I had a Heat wish list, that’d be the first place I look if it were possible.

The Orlando Magic have the first overall pick in the 2022 NBA Draft, and given that they’ll likely end up with Jabari Smith, Chet Holmgren or Paolo Banchero next to Wendell Carter Jr., a sign-and-trade to move Bamba makes the most sense — especially if it’s for shooting and a backup big man with upside to play behind the oft-injured Carter.

That is, unless, you could convince Danny Ainge, Dwyane Wade and the Utah Jazz to send you Donovan Mitchell for a package in the neighborhood of Herro, Robinson, Yurtseven, and multiple first-round picks.